Have you finished streaming The King: Eternal Monarch? Wondering what to watch next?

So without further ado, we present 10 TV shows that should whet the appetite when you’ve finished streaming The King: Eternal Monarch.

tvN’s first Saturday/Sunday night drama is an absolute firecracker of a show. Blending excellent characterization, lots of twists and some believable detective work, Stranger is a must-watch Korean drama. A winner of 3 Baeksang Awards, Stranger earns those accolades with a story that keeps you guessing right to the very end.

What’s particularly impressive with this show though is just how much chemistry the lead duo have without a single ounce of romance.

The catalyst for all of this drama is the death of Moo-Sung Park. Found dead in his apartment, prosecutor Si-Mok rushes to the scene and begins piecing together what really happened. With a TV repairman scrambling from the scene, Si-Mok joins police detective Yeo-Jin in chase and bring the suspect to custody.

What seems like a simple crime soon reveals layers of shocking corruption at both the police station and the prosecution office.

I won’t spoil anything here but suffice to say this is a cracking drama and well worth a watch. 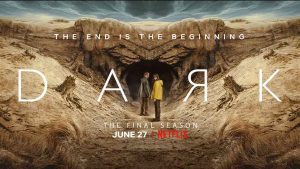 After an enjoyable first season, 12 Monkeys introduces a shadowy group called the Army of the 12 Monkeys. What ensues from here is an incredible journey that’s about as close as you’ll get to substituting Dark.

The interesting thing with Counterpart is just how normalized its sci-fi elements are. There’s echoes of J.J. Abram’s sci-fi flick Fringe here, especially with the main plot line which revolves around a parallel-reality.

At the centre of this lies Harvey Silk  inadvertently winds up entangled in a big cover up and face to face with his doppelganger from a parallel reality.

With the company he works for keeping the gateway between worlds hidden from the public, the 10 episodes see Harvey and his double trade places and grapple with a plot line involving powerful forces intent on disrupting the natural flow of both worlds.

It’s a well written thriller and although only running for 2 seasons, is a decent jump across parallel worlds worth checking out.

You can read our thoughts on Counterpart in our full season reviews here!

Flower Of Evil is one of those shows that completely catches you off-guard. This slow-burn thriller is a very cleverly written show that not only subverts expectations, it also hops across various genres effortlessly without ever losing sight of its main premise.

The story itself plays out as a combination of both a procedural crime drama and a cat and mouse thriller. Baek Hee-Sung is a man with a very dark past. Hee-Sung is seemingly happy in his marriage to police detective Ji-Won, with a loving daughter Eun-Ha offering up a semblance of normality for him.

Only, a string of unexplained murders point to Hee-Sung being the culprit behind this.

I won’t spoil much more but suffice to say, this one subverts expectations beautifully and delivers a solid story in the meantime.

You can read our thoughts on Flower Of Evil in our full season reviews here!

Crash Landing On You

One of the best things about Korean Dramas is how well they’re able to tell a story and how they manage to do so without too much sex, violence or swearing.

The series has managed to nail its story, character development and soundtrack while offering up some stunning imagery throughout. With plenty of heart-wrenching and powerful scenes, along with hilarious and romantic moments, CLOY has been quite the emotional roller coaster, one that I dare anyone to watch without shedding a tear or two.

Crash Landing is an incredibly well written series that completely quells any doubts despite its silly premise to deliver one of the best Korean dramas of 2020.

You can read our thoughts on Crash Landing On You in our full season reviews here!

As the episodes progress, so too does the evolving romance that takes centre stage, working harmoniously with the tense feud between the U.S. Embassy and Japanese in the heart of Korea where this tale unfolds.

If you like slow-burn romances or historical epics, Mr. Sunshine blends these two genres together effortlessly.

You can read our thoughts on Mr. Sunshine in our full season reviews here!

Undeniably one of the biggest and best Korean dramas ever created, Goblin is quite simply incredible. It’s a show that manages to juggle so many different genres and ideas but do so effortlessly while wrapping everything up in a simple but incredibly effective format.

At the heart of this one lies Dokkaebi, a 939-year-old guardian of souls who meets a grim reaper and a student with a tragic past. Off on a quest for a bride to break his immortal curse, the story takes many twists and turns along the way.

In doing so, Guardian kicks up quite the storm, delivering some of the best Korean drama content seen on TV. It’s a show that manages to nail every single part of its production while delivering a historically great drama in the process. When it comes to gold-standard K-Dramas, this one sets a very high bar.

So there we have it, our 10 TV show picks to check out when you’re done watching The King: Eternal Monarch.