The Hallyu wave is getting bigger and bigger and 2023 looks set to be no different. With A-list stars like Park Seo-joon and Bae Suzy making their small-screen comebacks, the new year has some very exciting dramas in store for us. From what’s been unveiled already, we shine a spotlight on the hotly anticipated K-dramas we think you should keep on your radar!

Plot: This historical drama is set in the city of Gyeongseong, during the spring of 1945. Jang Tae-sang, a wealthy merchant, and Yun Chae-ok, a bounty hunter who finds missing people, are forced to work together when monstrous creatures begin to plague the city. Joining them is Tae-sang’s best friend Kwon Joon-taek. However, the most exciting thing about this show is its star-studded cast!

When The Stars Gossip/Ask The Stars

Plot: This compelling drama will be set in outer space. Gong Ryong, an obstetrician-gynaecologist, arrives at a space station as a space tourist. There, he crosses paths with an astronaut, Eve Kim, who is a perfectionist.

Plot: Set in the 1980s, this series follows Park Joon-mo, a police officer who infiltrates crime boss Jung Gi-cheol’s organisation while undercover. His wife is Yoo Eui-jung, a narcotics officer who is supporting his investigation. This crime action drama should release sometime in the second half of 2023.

Plot: The second season of this fantasy show will pick up the story about a decade after the events of the first. The lead roles of the older versions of Eun-seom and Tan-ya will be played by Lee Joon-gi and Shin Se-kyung. The two must once again contend with power struggles and the looming threat of war.

Plot: What happens when an ordinary, broke college student moves into a sharehouse and finds an ex-celebrity who has left her K-pop days far behind her? Presumably, sparks fly. This romance drama will be helmed by Lee Jung-hyo, director of Crash Landing On You.

Plot: A dystopian series set in the future where air pollution makes it impossible for people to leave home without a gas mask. A strict social class system prevails and citizens rely on delivery drivers known as Knights. Kim Woo-bin plays a legendary delivery driver who meets Sa-wol, a refugee who dreams of becoming a Knight like him.

Plot: A love story of a different kind, this drama depicts the life of married couple Baek Hyun-woo and Hong Hae-in. Hyun-woo is a self-made man from the village of Yongdu-ri while Hae-in is the daughter of the chaebol family that owns Queens Group, where Hyun-woo holds a senior position. But will their marriage survive all the trials to come? Queen of Tears is set to premiere in the second half of 2023.

Plot: The Strangers from Hell director is coming up with yet another fascinating thriller revolving around murder. Choi Woo-shik will take on the role of Lee Rang, a college student who unintentionally kills a person who turns out to be a serial killer. When he realises that he has the power to identify bad people he begins to root them all out.

Plot: This thriller series will follow a young man on a path of vengeance. He enrols into the police academy in order to be able to take revenge on the people responsible for the death of his family members. The show will be available to stream on Disney+.

Plot: Kingdom (2019) writer Kim Eun-hee is penning a new mystery drama and this time the spotlight is on ghosts and demons.  Kim Tae-ri will play Ku San-young, a young girl working to become a public officer who ends up getting possessed by a ghost. She crosses paths with Yeom Hae-sang, a folklore professor played by Oh Jung-se. With Hae-sang’s ability to see demons and ghosts, the two of them set about solving a string of mysterious deaths.

Plot: The third season of this medical drama will air in 2023. The show will continue the realistic story of doctors working at Doldam Hospital, a rundown hospital in the countryside. Han Seok-kyu, Lee Sung-kyung, and Ahn Hyo-seop will reprise their roles from Season 2.

Plot: A woman finds out about her father’s infidelity. After his death, the mistress mistreats her and the woman begins to plot revenge. But her plans are turned upside down when she meets the mistress’s son and sparks begin to fly.

A Good Day To Be A Dog

Plot: This offbeat fantasy show will revolve around a woman who turns into a dog whenever she kisses someone. The answer to this curse turns out to be a man, except he is terrified of dogs.

Plot: Set within a psychiatric ward, this drama portrays the life of its inmates and staff. Park Bo-young plays the leading role of a nurse named Jung Da-eun. The drama will have 12 episodes.

A Time Called You

Plot: Based on a Taiwanese series called Someday or One Day, this drama will follow the life of Yeon-jun whose boyfriend passes away. A year later she is still grieving but suddenly finds herself transported back in time, to the year 1998. She wakes up in the body of a high school student. There, she meets Si-heon who eerily resembles her late boyfriend. This intriguing mystery drama will have 12 episodes.

Plot: This historical action drama takes place in the 1920s, during the period of Japanese occupation. Following the life of a soldier who becomes a thief and sets out to protect his people, the story will revolve around those who were displaced from their homeland.

Plot: Based on a webtoon of the same name, Moving will follow three teenage high school students who have inherited superpowers from their parents. The fantasy drama will look at how the three kids learn to use their powers while their parents try and protect them from being used by others. 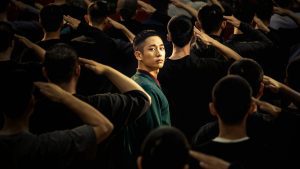 Plot: This highly rated series is making a comeback with a second season. Private Ahn Joon-ho and Corporal Han Ho-yul will be back on screens in 2023. The filming has wrapped and the show is expected to drop sometime during spring.

Plot: The second season of this musically inclined drama will have a new cast and a fresh story. While Disney hasn’t revealed much, they stated that the season will be a treat for K-Pop fans as it will feature some of the best of K-Pop music.

Plot: This sequel to the beloved Strong Woman Do Bong Soon revolves around Bong-soon’s cousin Nam-soon, who was also born with superhuman strength. Along with her mother and grandmother, who have superpowers too, Nam-soon gets tangled up in all sorts of thoroughly entertaining trouble. This bundle of fantasy, action and comedy will release in the first half of 2023.

Plot: Debt forces a young man into the murky world of loan sharks. He ends up entangled amongst dangerous people and power struggles bigger than ever before. This action thriller will have 8 heart-pumping episodes.

Plot: The Uncanny Counter is a supernatural drama revolving around ‘counters’ who work at a noodle shop by day and hunt demons infiltrating the living world by night. The well-loved show is returning in 2023 with a season 2.

Which Korean drama are you most looking forward to next year? Which sdo you think could become the best of 2023? Let us know your thoughts in the comments below!