For our ongoing series of articles depicting the best anime, our attention this time turns to shows with police officers. From psychological mysteries to hilarious slice-of-life narratives, there’s an excellent choice to whet your appetite.

Of course, if we’ve missed any of your favorites feel free to comment below and we’ll add them when we can!

Many fans may have seen memes of one of its female officers floating around. While that instance is a delight, You’re Under Arrest offers much more. This anime follows Natsumi, who hurries her Bokuto Police Department job because she’s running late. Unfortunately, Natsumi gets ticketed by an expert police driver named Miyuki.

Upon arriving at the station, Natsumi learns she’ll partner up with Miyuki. Despite her grudge against her, they develop a formidable bond that overcomes many obstacles. Therefore, the anime follows Miyuki and Natsumi’s daily routines as officers for the Bokuto Police Department. Despite its massive episode count, this series flows by in a blink of an eye.

The characters in this show receive excellent development and have beautiful personalities. The show doesn’t offer an entirely realistic portrayal of police officers, as there are times when the anime pushes logic aside. Some events often feel predictable and a bit cliche. However, if you can overlook its weird instances, you’re in for a fabulous time with You’re Under Arrest.

Heat Guy J is a fun action-adventure sci-fi anime with lackluster character designs and an uninspiring premise. While it has its faults, Heat Guy J has enough merit to grant viewers a worthwhile viewing experience. In it, we follow Claire, an established leader of a mafia group.

He inherits his leadership from his deceased father. While all seems well, Claire must contend with his city’s new profound operative Daisuke and his super android companion, J. Like many other popular detective narratives, this anime highlights the cat-and-mouse dynamic between the mafia and these two operatives.

Their rivalry gives this world life. While these two groups serve as the narrative’s focal point, other distinct groups and races are sprinkled to keep things fresh and entertaining. This series evokes incredible sensations of friendship, justice, and goodwill. 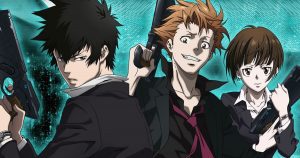 Psycho-Pass provides viewers with a world where technology determines a person’s likelihood to commit crimes and pinpoints their ideal career. This anime’s futuristic setting may offer mesmerizing visuals and pretty sights, but it’s a city engulfed by a gloomy atmosphere.

This anime takes place in futuristic Japan, where the city’s Sibyl System determines someone’s threat level by analyzing their psyche. At the center lies Akane, who uncovers the system’s shortcomings and aims to inform the world of her findings. Akane’s mission won’t be easy as she’ll encounter many obstacles in her path, seeking to take her down.

This is an anime with a serious and mature tone. It contains numerous graphical content from extreme violence to solid psychological themes. It gives viewers an incredible perception of the human brain and has countless thought-provoking mysteries and crimes to keep its tension afloat. With its epic gun fights to its incredibly-written characters, Psycho-Pass is a police officer-themed show you don’t want to miss. From seriousness to wackiness, we arrive at the world of Kochikame. This anime spans 300+ episodes of non-stop humor and slice-of-life elements. While most of its chapters are self-contained, diehard Kochikame fans watch the first 10-12 episodes to help you get accustomed to its cast and world.

This anime revolves around an unpaid police officer named Ryotsu who devises the most daring schemes to score a quick paycheck. His plans never go anywhere, landing him in more trouble with his chief.  This anime’s cast isn’t entirely memorable and follows typical archetypes.

Ryotsu makes up for the others’ lack of originality, though. Fans will enjoy seeing Ryotsu fail to make a quick buck, and they’ll root for him whenever he shows kindness. The series’ art and animation won’t blow anyone away. However, it fits with the tone the series is going for with its slapstick and gag humor. This is one of those anime where you can shut your brain off and watch the hilarity unravel before you.

Patlabor: The Mobile Police (Patlabor) is a profound Mecha series that feels more grounded than others. The machines in this anime don’t transform or speak, nor do they carry endless weaponry. Patlabor is an old-fashioned series with a good mix of dramatic and comedic bits to keep you watching.

Our tale takes place in a futuristic world where robots perform labor work. Despite being machines, their operators are entirely human, and these beings can sometimes become evil. Due to the rise of crime in this world, the police aim to combat these evildoers with machines called “patlabors.”

Therefore, our anime follows a motley crew of patlabor policemen and women who aim to resolve matters and maintain peace. Fans of shows like Mobile Suit Gundam or Transformers may find Patlabor disappointing because the machines in this show fight realistically and don’t harbor any soul.

This anime doesn’t offer an overarching plot. While a few subplots span more than two episodes, every chapter seems to come to a resolution in the end. While some may not mind episodic story structures, others may feel like Patlabor overstays its welcome with the content it presents per episode. If you’re looking for a more grounded mecha anime with a police theme, check out Patlabor: The Mobile Police.

B: The Beginning revolves around a notorious vigilante named Killer B, who initiates his form of justice on the islands of Cremona. After failing to apprehend Killer B, the Royal Investigation Service (RIS) call forth detective Keith Flick to subdue him.

With crimes heating up in the area, everyone realizes there are more people involved in this area’s madness. With the aid of his sidekick Hoshina and the elusive Killer B, Keith plans to unravel mysteries concerning secret organizations, domestic terrorism, and human experimentation.

Fans will adore seeing how Killer B and Keith’s storylines intertwine by the series’s end. This anime delivers some genius twists and turns that’ll catch viewers by surprise. However, some twists fall victim to being utterly predictable or coming out of nowhere.

This series delivers some violence and psychological battles. The story carries mixed baggage as it can be complicated and unpredictable when it chooses to be. The characters feel one-dimensional and lack development. While they have distinct qualities, there isn’t enough to warrant one’s attachment. If you’re looking for a mind-numbing series that will leave you entertained, check out B: The Beginning.

Paranoia, mystery, and drama are three noteworthy aspects of Satoshi Kon’s Paranoia Agent. This anime provides enough twists and turns to keep fans on the edge of their seats. With its distinct characters and several puzzling moments, it’ll keep you guessing and speculating.

The story revolves around a delinquent named Lil’ Slugger who goes around town hitting people with his trademark bat. He vanishes each scene afterward, making it difficult for officers and detectives to track him down. Faced with immense frustration and angst, the town’s police force plan to thwart Slugger’s tirade.

Paranoia Agent feels like it’s being engulfed by this large net of uncertainty with each episode. This adds a lot of fun to its mystery, as viewers are given just enough breadcrumbs to speculate how each character connects to the anime’s overarching plot.

The gritty and semi-realistic art style of the characters helps this show stand out from most anime. While our characters’ facial features may look distorted at times, it adds value to the show’s eery atmosphere. With its well-written plot, nightmarish visuals, and harmoniously chilling OST, Paranoia Agent is a well-crafted work.

This is an anime that strikes a balance between goofy and seriousness. This anime offers a silly plot and characters. It takes place in a universe where monsters and humans live together. At the center of this zany world is Natsuki, a human and animal hybrid who solves cases.

Natsuki tackles a slew of cases involving violence and harassment. Despite her genes, Natsuki doesn’t show any favoritism toward her human or animal clients. She tackles the law on an even playing field and receives help from her sidekicks Batanen, Tommy, and Sakura.

This anime is entirely episodic and has our crew embarking on zany and serious investigations. Each character has a different goal, ability, and personality. Our characters receive proper development and screen time. Hyper Police’s action scenes hold up well. The soundtrack matches the series’ tonal shifts flawlessly too.

If you’re looking for a delightful anime with funny characters, exhilarating fights, and a 90s anime-era art aesthetic, check out Hyper Police. Future Police Urashiman is an unknown 80s gem. What gravitates people to the series the most would be the interactions between its antagonist Fuhrer and protagonist Ryo. You’ll learn more about their backstory as you progress through the narrative.

This story is about a boy named Ryo who gets sent into the future by a strange phenomenon. His goal is to return to his time period. While searching for a solution, Ryo works for this setting’s police force. He solves daily cases in the most unique yet comical ways possible.

The supporting chaarcters in this anime don’t offer as much grandness as Ryo and Fuhrer. Many display cookie-cutter archetypes and don’t receive as much screen time as these two. This is an anime that doesn’t offer much in the grand scheme of things, but blends police work with sci-fi surprisingly well.

Dominion Tank Police is a classic sci-fi comedy with a simple premise, colorful characters, and solid background elements that hold up well by today’s standards. Our tale revolves around a girl named Leona who joins the world’s infamous Tank Police division.

With assistance from her mini-tank Bonaparte and some AI, she fights countless battles against a super-criminal named Buaku and his minions. While the story has its intriguing developments, there are times when you’ll feel like something is missing.

The characters follow common tropes and the anime doesn’t touch upon their backgrounds that much. However, they display enough favorable characteristics that’ll please viewers. As stated earlier, this series boasts incredible visuals for its time, as everything from its character and tank design looks astonishing.

If you’re on the hunt for more police-themed anime, this one’s worth a watch.

So, there we have it, our picks for the best anime that revolve around police officers!