8 More Simulation & RPG Titles To Get Lost In!

Stardew Valley offers an incredible farming simulation experience. Fans enjoy this game’s creative gameplay loop and the simplistic story it offers. It’s one of those games that you can come back to numerous times to partake in new activities. From taming wildlife to exploring frivolous caves, Stardew Valley provides gamers with enough things to pursue.

If you’ve finished playing Stardew Valley and are looking for alternatives – fret not! We’ve combed through the archives and saved you the hassle with our top 8 picks.

So without further ado, we present 8 games to check out if you’re looking for a game like Stardew Valley.

Harvest Moon is one of the most prolific farming games of all time. Despite being dubbed under a new title called Story of Seasons, this series contains some nifty information regarding the pros and cons of farm life.

This series typically revolves around a young protagonist aiming to bring life and prosperity to a poorly established farm. To do so, you must tackle all sorts of activities like clearing landmass, planting and selling crops, and establishing relationships with the residents nearby.

This is a game that will keep you on your feet like Stardew Valley. This game isn’t without its penalties for the player. For instance, if you decide to take time off from watering plants, they could stop producing. Failure to take care of animals can result in them becoming ill or worse.

It’s these small issues that help players remain immersed in Harvest Moon’s various games. If you adore the farming and social aspects of Stardew Valley, then you’ll love what the Harvest Moon series delivers. 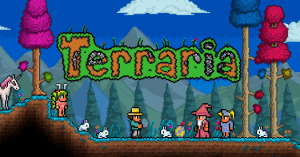 Terraria is an incredible 2D open-world survival game where you can let your imagination run rampant. This game provides you with a vast and lush environment and lets you go about your days as you please. You can fight nearby foes, search for unique items, or create wonderful gadgets.

Terraria presents a 2D universe for you to traverse and encourages creativity. If you want to build a village full of like-minded and impressive soldiers, go ahead. If you want to embark on a quest where you fight random enemies and look for grand treasures, no one will stop you. This is your world to conquer and create.

This game has a fantastic community full of kind-hearted players. The game’s developers provide numerous content updates that improve the game with each drop. Stardew Valley fans that are looking for a similar two-dimensional experience but with more freedom and content updates should give Terraria a try.

As of this write-up, Animal Crossing: New Horizons is Nintendo’s second best-selling first-party game on the Nintendo Switch. This game has defeated the likes of The Legend of Zelda: Breath of the Wild, Super Smash Bros. Ultimate, and Super Mario Odyssey.

Unfortunately, it doesn’t feature as much content as the Nintendo 3DS’s Animal Crossing: New Leaf. That game received more Nintendo-themed items and held fans’ attention for a long time. Nevertheless, this game offers a decent amount of content for players to unravel and participate in with their friends.

In Animal Crossing: New Horizons, you must create the island of your dreams. However, that dream doesn’t come cheap. You’ll need to complete numerous tasks for the wealthy raccoon dog Tom Nook if you hope to develop an island worthy of your name.

The small missions include mundane activities from picking up seashells to digging up holes in the sand or grass. You’d then sell those at the shop to receive Bells (Animal Crossing’s in-game currency). You’ll use the bells to buy items for your island, residents’ homes, and your household. This is a fun game that entices players to socialize and gives insightful knowledge about the world of finance.

My Time At Portia

What happens when you mix Studio Ghibli with farming simulation? You’d end up with something like My Time at Portia. This game features a compelling narrative about the life of a new workshop owner. This workshop owner happens to be a gifted craftsman’s son who inherited it from his father.

As his son, you must mine and craft your way to owning the best workshop in the town of Portia. Your journey will have you indulging in many activities. These consist of socializing with townsfolk, exploring dungeons, and getting the chance to marry people/

Although you’re tasked with this mission, you don’t need to rush into creating the best worship right away. This game wants players to proceed with the game at their own pace. The game may evoke stress within players because of its assortment of challenges. However, if you can push through these obstacles with high integrity, you walk away from this game, satisfied.

Are you in need of some wholesome entertainment? The Slime Rancher series wishes to engulf you with its cutesy character designs, beautifully lavish environments, and charming gameplay. This game evokes the sense of a wholesome adventure title and doesn’t plan to offer anything less than that.

This game follows a feisty young rancher named Beatrix, who embarks on a quest far from Earth. Her mission is to enjoy her new life on a ranch entrusted to her by a noble rancher named Hobson. She must wrangle up slime-like creatures with her trusty vacpack. Beatrix’s life is never dull as you’ll help her overcome countless obstacles that have nothing to do with her day job.

Some activities include growing crops, harvesting resources, and exploring untamed wild lands. All these activities contribute to your overarching goal of rebuilding Hobson’s beloved ranch. No adventure game wouldn’t be complete without its boatload of secret areas and markets. With its many simulation aesthetics, daily missions, and excellent resources, Slime Rancher is a great adventure title to play next. Graveyard Keeper is what happens when you mix medieval fantasy with life simulation. In it, players will craft and monitor a medieval graveyard while enduring ethical hardships and making questionable choices. Although it’s full of inaccuracies, it boasts fun and addictive gameplay like Stardew Valley.

This game evokes capitalism to the tenth degree. You’ll find yourself expanding into different ventures and conjuring up methods to cut costs. Using your resources wisely and looking for ways to attain more equipment is the mindset you’ll have while playing this game.

Not only that but Graveyard Keeper contains a romantic storyline that’ll appeal to fans of dating sims. This game offers some dark undertones though. During your expedition, you’ll stumble upon dead corpses of fallen organisms. You can grind their flesh up to sell them to your local butcher or carry on with your day as normal.

This is a fun yet daunting title with mature themes. If you’re a fan of Stardew Valley, but want something that’s grittier, I’d check out Graveyard Keeper.

Doraemon is one of those classic anime franchises that shows its rear head into the mainstream whenever it wishes. Whether through new films, merchandise, or games, Doraemon’s legacy continuously thrives. Doraemon: Story of Seasons is an example of its franchise holder’s idea to keep Doraemon in the spotlight.

In this game, players control the show’s male protagonist Noby. Noby, Doraemon, and their friend group get transported to the technology-lacking town of Natura. As the players, you must help Noby revitalize an old decrepit farm and become a valued citizen here.

This game boasts an incredible painting-like aesthetic that’s mesmerizing. Like Stardew Valley, players receive numerous tasks to tackle and the freedom to explore Natura to their liking. Whether you want to spend time chatting with Natura’s residents or planting crops, it is all up to you.

This game grants players freedom and this is one of its finest features. Grinding for useful items can feel like a chore, but if you’re into playing games for the long haul then Doraemon: Story of Seasons is worth playing.

Moonlight is an action-packed pixelated RPG with phenomenal rogue-lite elements. This game has players control Will, a shopkeeper who dreams of becoming a hero. You’ll assist Will through his various dungeon expeditions, battles, and thieving activities.

You’ll be crafting many useful tools to sell in Will’s shop and utilize in battle. Think of it like Minecraft to some extent with its enchantments, weapons, and economy on public servers. Players will explore numerous locales that harbor citizens worth meeting, some spanning colorful personalities.

Give Moonlighter a go if you’re looking for a title with more action-centric gameplay.

So there we have it, our 8 video game picks to keep you busy after playing Stardew Valley.