Enlighten Yourself With More Adrenaline-Enhancing Games

Splatoon is one of Nintendo’s newest and freshest properties released in the past decade. This game offers competitive third-person shooter gameplay with a fine twist. Instead of gunning down other players, you’re tasked with shooting the most ink on the floor to win.

Over time the franchise introduced more distinct takes on classic third-person shooter modes like zone control, tower defense, and others. It’s a franchise fans love for its fashion, addictive gameplay, and colorful characters.

If you’ve finished playing Splatoon and are looking for alternatives – fret not! We’ve combed through the archives and saved you the hassle with our top 8 picks.

So without further ado, we present 8 games to check out if you’re looking for a game like Splatoon.

deBlob is a 3D platformer title that made inking areas and enemies fun before Splatoon. In this game, players control the gelatin-like hero, de Blob, and embark on a quest to replace his world’s dull gray colors with more vibrant color pallets.

Despite de Blob’s admirable gesture, he’ll need to defeat a slew of gray-clad enemies called the Inkies if he hopes to save his world from dullness. de Blob offers compelling ink-based combat. You’ll find yourself flipping, bounding, and smashing your way past the Inkies. Like Splatoon, maneuverability is the most important aspect of this game as you’ll need to dodge enemy attacks while covering your world in colors.

deBlob also offers a different array of multiplayer modes like Splatoon. Unfortunately, deBlob doesn’t offer online multiplayer of any variety like Splatoon does. Instead, you can play the game with your friends offline through split-screen multiplayer.

Katamari Damacy REROLL takes place in a magical kingdom where a frivolous king has accidentally destroyed all the stars in the sky. As his tiny son, you must recover all the stars your father destroyed to restore the sky’s beautiful light source.

Katamari Damacy REROLL’s premise is just as chaotic as Splatoon’s gameplay. It promises disorderly gameplay and goofy shenanigans to keep you engaged. To restore the stars to their former glory, the king requires you to gather specific objects by utilizing a magic ball called Katamari.

Like Splatoon, Katamari Damacy REROLL’s controls are simple but will take some time for players to adjust. Like Splatoon’s ink meter, the Katamari will grow in size as a response to how many items you collect in the game. However, if you run into an obstacle, your ball will explode into tiny pieces–requiring you to gather all your materials again.

Coupled with its time limit, Katamari Damacy is a chaotic game that tests your precision and cognitive abilities. If you’re looking for a game that has a silly premise but offers a decent challenge, check out Katamari Damacy REROLL.

Imagine playing as Wolf Link during the entire adventure of The Legend of Zelda: Twilight Princess. This is essentially what you’re in for with Capcom’s action-adventure game Okami. While it features more grandiose puzzles than Splatoon, the gameplay in both titles requires technical and strategic thinking.

Okami’s Celestial Brush game mechanic is also reminiscent of Splatoon in theming and utilization as it changes the way you approach scenarios in the game. The brush’s strokes leave more of an impact on Okami’s environment than the Inklings ink in Splatoon, though. This is due to the celestial brush’s being able to do things like revive dead plants and create vine-like grappling hooks from trees.

On the other hand, both games utilize ink in hopes of crafting unique identities for themselves. If you’re looking for a more story-driven narrative that utilizes ink in similar and different matters than Splatoon, check out Okami. 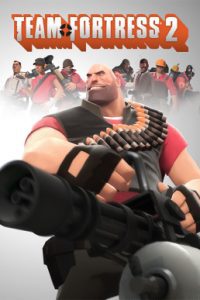 Team Fortress 2 offers a plethora of different gameplay modes like Capture the Flag and King of the Hill. Although Splatoon focuses more on inking your turf with your team’s color than the standard “murderous combat” found in most shooters, both titles evoke a strong sense of humor.

Team Fortress 2 also offers a training mode that allows you to test your skills before you hop into a game with strangers or friends. Both games offer many weapons that attribute different arrays of perks and challenges. If you’re looking for another shooter with an incredible gameplay loop, check out Team Fortress 2.

This game follows the same death match formula as any other shooter. It places you in a squad with other players and tasks you with eliminating the opposing squad’s members. This is where the morphing gimmick comes into play. For example, if you shoot at an opponent’s head and eliminate them–their head will shrink while yours inflates.

Each team also has a large corresponding avatar that grows bigger based on your team’s overall mass. Whichever team’s avatar is the biggest when the time runs out is the winner. This premise sounds more bizarre than Splatoon’s Turf War in theory but will make more sense as you play the game. The morphing gimmick also opens the door for distinct abilities and power-ups you can use in the fire-fight.

If you’re looking for a wackier version of Splatoon, I’d recommend giving Morphies Law a chance.

Imagine taking the colorful world of Splatoon, but making it more action-centric with a strong ninja theme. You’d end up with something like Ninjala. While its notoriety hasn’t hit the same level as Splatoon, this free-to-play game gained the attention of many Splatoon fans when it was released.

Many fans enjoyed Ninjala for its intriguing Rock-Paper-Scissors combat system, beautiful maps, wonderful content updates, and customization system. The game became so popular to the point that it received an anime adaptation. On that note, it managed to gain anime collaborations from shows like Demon Slayer to Jujutsu Kaisen.

This game follows a similar structure to Splatoon, where you’ll be grouped with three other players to go against another squad of four players. You receive limitless lives but will need to wait a few seconds before you can enter the battlefield again. Your mission is to eliminate as many enemy players and specific objects to earn points. The team with the most points wins the game.

Due to Splatoon’s overarching popularity, this game hasn’t received the same attention it got when it was launched. However, the Ninjala fan base is still active as there are many fans who enjoy the endless updates of Ninjala’s developer’s release. If you’re looking for a more action-oriented version of Splatoon, Ninjala’s worth trying out.

Hypercharged: Unboxed feels like a love letter to creative shooter games and action figures. It feels directly inspired by the film Small Soldiers and offers many fun gameplay mechanics to ensure players will have a blast playing it solo or with friends.
Like Splatoon, Hypercharged: Unboxed offers a unique take on shooter games. Instead of centering its gameplay around a death match-like scenario, this game opts to wrap its core gameplay around a tower defense-like mode. While this may sound off-putting to some, Hypercharged: Unboxed’s developers manage to craft an intense war-like atmosphere with its action figure personas.
The enemies you’ll be defending your landscapes from are a bit more creative than Splatoon’s Octoling foes. In Hypercharged: Unboxed you’ll encounter enemies ranging from tiny green army men to a large and menacing toy-like Tyrannosaurus Rex. You can also expect to combat enemies like these in realistic locations like in a giant sandbox to an aisle in a toy store.
Again, Hypercharged: Unboxed is an incredibly creative game with an active following. If you’re a fan of first-person or third-person shooters, but want something that hits close to home, check out this game.

Fortnite has become a massive hit across the world. Everywhere you go, you’ll find people, young and old–sharing their passion for the game and its stellar variety of gameplay modes, customization options, locales, and more. Like Splatoon, this game has become a staple third-person shooter everyone can enjoy.

Although there are many modes in Fortnite, its main attraction is its battle royale. Within this mode, you’ll be taken to a large and vast island alongside ninety-nine other players via the game’s battle bus. This island holds many locations for you to land it. Each island has a share of weapons and items for you to collect.

Once you drop into one of these locations, your mission is to survive until you’re the last person standing. Each game features a purple cloud substance called the Storm to build tension. The Storm is a gameplay mechanic that drains your life bar if you’ve found yourself within it. This forces players out of hiding, making all matches feel active, suspenseful, and thrilling.

Gameplay aside, Fortnite’s character customization systems rival the options found in Splatoon. Not only can you equip different emotes, paint sprays, and lobby music, but the game features a slew of skins for you to try out and purchase. From Arianna Grande to Dragon Ball Z’s Goku, the possibilities are endless with Fortnite.

If you’re looking for a third-person shooter with mind-boggling player avatars and addictive gameplay, play Fortnite.

So there we have it, our 8 video game picks to keep you busy after playing Splatoon.