Toss Another Show To Your Witcher

The Witcher is the latest fantasy epic from Netflix, depicting the journeys of Geralt of Rivia as he sets out on his journey to vanquish monsters and make a living.

So without further ado, we present 10 TV shows that should whet the appetite when you’ve finished streaming The Witcher. Early on you’d be forgiven for writing this one off, especially with the gratuitous nudity and blood-soaked violence. However, this series soon evolves into a more compelling story over time, boasting 3 seasons of exciting, action-packed drama.

The story centers on the life of Spartacus, a gladiator who eventually leads a rebellion against the Romans. His entire journey is depicted beautifully here, in this gloriously vicious and bloody series.

Oh, and on a side note, the season finale is suitably epic too, rewarding your time with a satisfying conclusion.

While the later seasons do take some liberties with that realism and the plot does run out of steam before its final season limps over the finish line, there’s enough here to enjoy nonetheless. 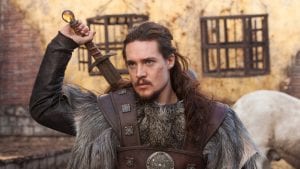 With a fifth season already green-lit, this is one of the better choices to check out when you’re done with The Witcher.

If you swap out the fantasy setting of The Witcher for pirates and high sea shenanigans, it wouldn’t be far removed from what Black Sails achieves. Split across four seasons, this sea-faring venture captures the essence of piracy beautifully and does so with some impressive visuals and an expansive story.

The story begins with castle guard Rian stumbling upon a dark secret held by the Skeksis and finds himself on the run. Meanwhile, intelligent Princess Brea is given a prophetic message, leading her to uncover secrets in her home, Ha’Rar. The third character, Deet, teams up with the hilarious Podling Hup on their own misadventure.

Spread across 10 episodes and utilizing an abundance of practical effects, puppets and wondrous storytelling, Age Of Resistance is the perfect accompanying piece to the original film. Dark Crystal is a must-watch.

Avatar is a fantastic animation that’s a must-watch for kids and adults alike.

The series itself revolves around a world divided into four elemental nations: The Northern and Southern Water Tribes, the Earth Kingdom, Fire Nation, and the Air Nomads. The Avatar uphold the balance between nations and up until the start of the first episode, everything seems to be peachy. That is, until the balance of power shifts.

While not as popular as Demon Slayer, Claymore is another anime that depicts a world full of demons. This time though, they’re referred to as “youma” as we follow a young, silver-eyed woman known as Clare. She works on behalf of an organization that trains up female halfbreeds into warriors to go after these demons and kill them. See the similarities with The Witcher?

At the center of this is Clare and the anime follows her as she’s whisked away on numerous different missions across the series. This one is much more geared toward characterization though and partly the reason it works as well as it does is thanks to the writing for its cast, which constantly impresses across the run-time.

Xena: Warrior Princess is a proper 90’s throwback. Alongside Hercules, Xena was one of the mainstay action heroes of the era. With a great blend of drama, comedy and action, Xena is well worth a watch.

The story itself centers on Xena, a mighty Warrior Princess with a dark past. She sets out to redeem herself, joined by a small town bard called Gabrielle. Together, they journey the ancient world, fighting against ruthless Warlords and Gods for the greater good.

This is a campy show that never takes itself too seriously. While it seems a little dated by today’s standards, the comradeship between its two leads is partly why this show works as well as it does. It’s certainly worth checking out if you enjoyed watching The Witcher.

So there we have it, our 10 TV show alternatives to watch when you’re finished watching The Witcher on Netflix.