The Bay is one of the better ITV crime dramas on the platform and certainly has a lot going for it. With some shocking twists, lots of drama and likable characters, the end of season 2 may leave you desperate for more.

Well, we’ve combed through the archives and saved you the hassle of having to try and find something similar with our top 10 picks for alternate viewing.

So without further ado, we present 10 TV shows that should whet the appetite when you’ve finished streaming The Bay.

Based on true events, Manhunt: Unabomber blurs the line between fact and fiction in this dramatized reconstruction of the Unabomber case in 1995. Although it suffers from unnecessary padding in the middle episodes, Manhunt is a decent show sprinkled with some excellent acting. The show has a solid pacing too, producing an enthralling, binge-worthy show about the notorious postal bomb killer.

Informative and surprisingly realistic in the way it depicts investigative work, Manhunt: Unabomber should be a hit with true crime fans.

You can read our thoughts on Manhunt: Unabomber in our full season review here!

In its simplest form, Whitechapel is an ITV drama that revolves around detectives in London’s Whitechapel district. Newly-appointed DI Joe Chandler is our main character here, joined by DS Ray Miles who soon come to realize they’re dealing with a copycat killer.

Across four seasons, the plot replicates many different historical crimes, with the first season centering around Jack The Ripper. There’s a medley of different influences in this show, and like most ITV series it’s not afraid to bundle in a number of plot clichés and tropes. However, the show is undeniably appealing and the fourth season even ends things on a relatively satisfying note.

tvN’s first Saturday/Sunday night drama is an absolute firecracker of a show. Blending excellent characterization, lots of twists and some believable detective work, Stranger is a must-watch Korean drama. A winner of 3 Baeksang Awards, Stranger earns those accolades with a story that keeps you guessing right to the very end.

The catalyst for all of this drama is the death of a man named Moo-Sung Park. Found dead in his apartment, prosecutor Si-Mok rushes to the scene and begins piecing together what really happened. With a TV repairman scrambling from the scene, Si-Mok joins police detective Yeo-Jin in chase and together they bring the suspect to custody.

What seems like a simple crime soon reveals layers of shocking corruption at both the police station and the prosecution office. From here, the show builds up an impressive blend of paranoia, drama and tension across 2 seasons

You can read our thoughts on Stranger in our full season review here!

The murder of a 22-year-old French National on Twickenham Green sends Colin Sutton spiraling. In over his head, a coincidental break in the case starts the ball rolling as the investigative team hone in on the lead suspect, Levi Bellfield. As more truths come to light, the police ramp up in preparation to arrest Bellfield and prevent him from escaping.

While Manhunt lacks the big budget and explosive action that’s made many other crime dramas so memorable, this show instead revels in the simplicity of its premise.

To prevent mundanity from settling in, Manhunt throws an impressive amount of realism at the screen, showing the analytical and methodical way investigations are uncovered in real time. With numerous teams liaising together, tensions do arise although at times this feels a little superficial, designed to keep things moving along and interesting rather than truly reflecting the nature of the work.

Split across three episodes, this one’s a simple and endearing watch.

You can read our thoughts on Manhunt in our full season review here! 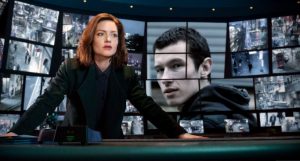 BBC drama The Capture is an intriguing drama let down by a cliffhanger ending that (at the time anyway) was uncertain to return for a second season. Well, thankfully BBC have renewed this which makes recommending it a lot easier. The show centers around a big conspiracy that sometimes gets a little too big for the 6 episodes on offer but it just about holds it together until the end.

When a British soldier called Shaun Emery is arrested, CCTV footage shows him assaulting a young woman he met the previous night. Only, Shaun Emery is adamant he didn’t do it. Tenacious young detective DI Rachel Carey then starts to look into his case in more detail, finding a shocking multi-layered conspiracy that challenges everything we know about security and surveillance.

If you don’t mind an open-ending, The Capture is certainly worth checking out.

You can read our thoughts on The Capture in our episode reviews here! Based on the Swedish novel ‘Störst av allt’ by Malin Persson Giolito, Quicksand is a surprisingly well written, absorbing series, one that does an excellent job adapting the novel into one of the best dramas of the year. With two timelines separated through Maja’s flashbacks and one school shooting anchoring everything into place, Quicksand is an easy show to binge and a tough one to put down.

Blood spattered across school tables and the ground set the tone for the series, opening with the aftermath of a shooting and the shell-shocked, 18 year old Maja sitting with the murder weapon by her side. As police grab her and take her into custody, across the 6 episodes we learn of the events leading up to that day involving Maja’s mentally unstable boyfriend Sebastian and all the drama that transpired between the victims inside the classroom. The slow build around all of this paves way for a really satisfying conclusion where Maja’s fate is revealed.

Happy Valley is another British-based crime drama, centering on a strong-willed police sergeant in West Yorkshire called Catherine Cawood. Still reeling from her teenage daughter Becky’s suicide 8 years prior, Catherine is a woman on a mission. When she learns Tommy Lee Royce (the man responsible for the brutal rape of Becky prior to her suicide) has been released from prison, Catherine sets out to try and find him.

As Catherine’s vengeance becomes obsession, unbeknownst to her Tommy is actually involved in the kidnapping of a woman known as Ann Gallagher. What ensues is a cat and mouse chase as Catherine tries to track down and apprehend the suspects before it’s too late.

The second season then picks up 18 months after these events for a new crime but along the way, Happy Valley excels with its relatable, strong characters and gripping drama. This one is definitely worth a watch.

So there we have it, our 10 TV show alternatives to watch when you’re finished with The Bay on ITV.