Reacher is a well written, action-packed series that manages to blend a good deal of action with a solid mystery and a really enticing hook.

So without further ado, we present 10 TV shows that should whet the appetite when you’ve finished streaming Reacher!

Action-packed and full of high-octane set pieces, Jack Ryan is a solid reboot and much like Reacher, is actually available to stream on Amazon Prime Video.

The story centers on up-and-coming CIA analyst Jack Ryan as he’s thrust into a dangerous field assignment. He soon uncovers a pattern in terrorist communication, launching himself headfirst into a deadly plot that could cost him his life.

Although the plot is a tad contrived (especially in season 2), there’s a good deal of action and drama to offset that, making for a thrilling ride from start to finish.

Violent, gritty and featuring some seriously well-choreographed fights, The Punisher is a brutal Marvel series. It does suffer from the usual baggage that comes with a lot of these Netflix offerings – especially in its bloated run-time – but the action more than makes up for it.

The story is simple and revolves around a man named Frank Castle, who sets out to avenge his murdered family. With military background, a no-nonsense attitude and plenty of action, The Punisher earns his lucrative title.

With two seasons to get through, The Punisher offers a fair amount of bang for your buck.

You can read our thoughts on The Punisher in our full season reviews here!

Much like Reacher, Banshee is a show that completely catches you off-guard. With a great storyline and an inspired Antony Starr in the driving seat, Banshee is an underrated gem that’s well worth checking out.

The story revolves around an ex-con assuming the identity of a murdered sheriff but as the narrative progresses, so too does the main premise of the show.

I won’t spoil anything here but suffice to say if you’re after a violent, action-packed show, Banshee should keep you busy for a while.

Split across three seasons, Jessica Jones is a decent noir drama that takes the idea of superheroes and throws it into a more conventional mystery set-up. The story sees drunk and troubled Jessica Jones trying to rebuild her life as a private investigator. Along the way, she finds ghosts from her past haunting at every turn.

It’s an intriguing set-up and one Krysten Ritter really runs with to make her own in this excellent portrayal of the Marvel hero. Much like other Netflix Marvel offerings however, the show does feel a tad overlong but the characterization is excellent, which does make up for any shortcomings.

You can read our thoughts on Jessica Jones in our full season review here!

Designated Survivor is another Jack Bauer thriller and it’s one heck of a cracking show.

The story centers on a low-level Cabinet member that’s suddenly thrust into the role of becoming President of the United States after a devastating attack kills everyone above him in the chain of command.

Hours after the attack on the Capitol, Tom Kirkman is forced to try and lead the country through this devastation… but is there a larger danger lurking in the wings?

Well written and nail-bitingly tense, Designated Survivor is another must-watch. 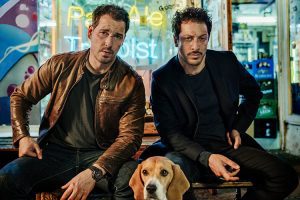 Split across 10 episodes, Dogs Of Berlin sees Germany on the cusp of a gang war. Tensions between the Turks and Neo Nazis reaches fever pitch and at the heart of this conflict are two troubled police officers. Crooked cop Kurt Grimmer and Turkish drug officer Erol Birkan are our protagonists here.

The story picks up when German football superstar Okam Erdem is found dead in German loyalist territory. Grimmer leads an investigation to get to the bottom of what happened, while owing money to some very dangerous people.

While the opening few episodes keep him and Birkan separate, they’re reluctantly joined together over a common interest, building toward an explosive, climactic finale.

Treadstone is a 2019 spin-off series based on the Bourne films. With no mention of Jason Bourne here, but a continuation of the same lore and ideas, this show centers on The Treadstone Project.

For those unaware, this is the group responsible for creating super-spy Bourne, and this time they turn their attention to a new protocol to develop unstoppable superhuman assassins.

As agents across the globe “awaken” to resume deadly missions, interspersed around this timeline are flashbacks to 1973 that help to fill in the blanks as to what’s happening – and why.

Do be aware that the season was cancelled and as such, season 1 does leave a fair few questions unanswered. However, it’s a very enjoyable action thriller all the same.

Another small-screen reboot of a big film franchise, the Taken series is surprisingly functional and moreish offering, one that works as both a prequel and a reboot for the Liam Neeson trilogy.

The story here centers on a much younger Bryan Mills. He’s single and has no children. However, when his sister is murdered, Bryan remains determined to figure out who’s responsible, thus setting up a similar race against the clock as Bryan tackles various terrorists and foes.

With a good amount of drama and plenty of action to boot, you should find enough to like with this one.

Alongside Lost, 24 is arguably the show from the early 2000’s that revolutionized how we watch TV. With 24 episodes and each chapter depicting an hour in “real-time”, the show centers on agent Jack Bauer, who races against the clock to subvert terrorist plots and save the nation from disaster.

From chemical warfare and assassinations to deep levels of government conspiracy, 24 keeps things fresh and exciting across its 8 seasons.

Although the final ever episode does leave things ambiguously open, 24 is a brilliant show and easily one of the best action thrillers on the small screen.

So there we have it, our 10 TV show picks to check out when you’re finished with Reacher on Amazon Prime.