10 Other Anime At Your Service!

Miss Kobayashi’s Dragon Maid is an anime where a lonely dragon girl named Tohru befriends a wandering woman named Kobayashi. After offering her a place to call home, Tohru becomes a human maid and offers her services to Kobayashi. Unbeknownst to Kobayashi, having a dragon as your maid will bring much mischief.

There is no need to worry if you’re watching Miss Kobayashi’s Dragon Maid this season and can’t find more of the same.

So without further ado, we present 10 TV shows that should whet the appetite when you’ve finished streaming Miss Kobayashi’s Dragon Maid!

If the viewers found Tohru’s shift from dragon to maid a bit jarring yet comedic, then Himouto! Umaru-chan’s main protagonist should grant them a similar experience. With its comical aspects and cutesy character designs, Himouto! Umaru-chan aims to give viewers a comforting and hysterical venture.

The story follows Umaru Doma, a straight-A student in high school but a lazy slacker at home. Her brother, Taihei, and their friends are stuck with picking up Umaru’s home activities. Thus the anime follows the wacky adventures and mishaps occurring in the Doma household and elsewhere.

For the most part, both anime feature themes of family and friendship. All the side characters have unique personalities that held them stand out from each series’s main protagonists. Both anime emphasizes Umaru and Tohru’s struggles with managing their two different lifestyles in ways that’ll leave viewers in awe.

One of the many aspects viewers enjoyed about Miss Kobayashi’s Dragon Maid was the great chemistry between Tohru and Kobayashi. Another series that’ll give fans a similar experience is The Helpful Fox Senko-san.

With a blend of supernatural entities, relaxing slice of life narrative, and an abundance of cuteness, there’s much to adore from this anime. However, The Helpful Fox Senko-san leans more toward comforting its viewers than shoving off-the-wall humor into their faces. Yet, viewers will attain similar emotions from this anime, like Miss Kobayashi’s Dragon Maid.

The story follows an overworked individual named Kuruto, whose starting to reach his breaking point. However, he meets Senko-san, an elderly but young-looking fox girl wishing to help him deal with his stress in whatever way she can.

In The Helpful Fox Senko-san viewers can expect a wide range of supernatural and human side characters with differing personalities and interests. Both anime also dive into romance a bit regarding their main characters.

Miss Kobayashi’s Dragon Maid contains more ecchi and comedy than The Helpful Fox Senko-san though. Yet, both anime aim to help their viewers distress about life complications and hardships.

The Devil Is A Part-Timer!

With the overabundance of Isekai anime out today, many may crave a series like Miss Kobayashi’s Dragon Maid, which tackles the genre from an opposite perspective. The Devil Is A Part-Timer not only presents another well-done take on the reverse Isekai formula, but it’s a series that’ll leave many viewers craving more.

The Devil Is A Part-Timer doesn’t contain as much fan service and doesn’t have as many female characters like Miss Kobayashi’s Dragon Maid. However, the anime will feature romance, action, and colorful characters.

The anime showcases Satan fleeing from a heroic figure named Emilia because she foiled his plans to rule over a continent. He ends up in Tokyo and takes on the persona of a fast-food employee named Sadao. Though he failed, Satan decides to go after a bigger prize, and that’s taking over the earth.

Both series feature characters from supernatural worlds adjusting themselves to a world unknown to them. The same goofy shenanigans and surprisingly dramatic bits found in Miss Kobayashi’s Dragon Maid are apparent in The Devil Is A Part-Timer.

Though the fantastical realms they cover are different, The Devil Is A Part-Timer’s characters and world may feel closer to home than Miss Kobayashi’s Dragon Maid.

Imagine having a sole purpose in the world and throwing it all away to live a life you feel is better. Gabriel Dropout is an anime that touches upon this concept. With its endless hilarity, adorable characters, and random shenanigans, many will find Gabriel Dropout’s world to their liking.

Despite this, Gabriel Dropout likes to stay safe and avoid emotionally dramatic dialog and themes. While it doesn’t contain any emotional story beats, it has plenty of comedy and quirky characters that’ll spark interest.

Gabriel Dropout follows a fallen angel named Gabriel, whose purpose is to study humankind in hopes of becoming a true angel. Although Gabriel’s pumped to fulfill her mission, she later becomes a lazy, apathetic angel whose interest leans toward playing video games. Thus the anime features Gabriel and her friend’s various antics that stray from their ultimate goal.

Like Miss Kobayashi’s Dragon Maid, Gabriel Dropout presents an opposite take on fantastical beasts. In this case, some angels are shown as slackers, while some demons are more profound and responsible.

Furthermore, both series have a similar cutesy art style that differentiates many’s horrific depictions of dragons and demons. If you’re searching for a demon series featuring wacky characters and a pleasant story, Gabriel Dropout is a great choice.

Blend S was a seasonal anime that generated much fanfare for its opening theme song meme involving the letter S. While the memes played a role in its popularity, the series delivers excessive humor, colorful characters, and a small drop of realism.

Blend S doesn’t contain fantastical elements like Miss Kobayashi’s Dragon Maid, though. Also, the anime doesn’t have an overarching plot and sometimes leans on repetitive gags. Nonetheless, its characters and comedy may eliminate those issues.

The story follows a girl named Maika whose looking for a place that will hire her. Furthermore, she lands a job at a cafe as a sadistic waitress since roleplaying is a part of the job. The anime observes Maika’s time as a waitress and the many shenanigans that she endures.

Blend S is a wholesome and comedic blend that turned out well for many fans. The cast is lovable, as each waitress manages to stand out amongst each other, despite having a similar occupation. While the anime’s recurrent gags can become stale, it’s a series that’s best watched whenever someone requires a cheery atmospheric anime.

Hinamatsuri’s an anime that can take ordinary circumstances and transform them into cleverly humorous scenes. With its blend of supernatural humor and depressing story arcs, Hinamatsuri promises viewers will leave away enthused.

Unlike Miss Kobayashi’s Dragon Maid, Hinamatsuri doesn’t contain any fantastical elements, and its soundtrack is a bit bland. Yet, the anime manages to tackle similar themes regarding acceptance, loneliness, and family.

The comedy implemented into Hinamatsuri is well-written and executed. Even when a joke doesn’t land well in an episode, it manages to pick itself back up with a better one. The series’s characters develop well and never have their earned growth reset at the start of a new episode. The dramatic and emotional moments never feel forced too.

What sets it apart from Miss Kobayashi’s Dragon Maid is its varied cast of multiple different species. Despite that, viewers can expect similar humor and emotionally-driven story beats in Interview with Monster Girls.

On that note, the Interview with Monster Girls follows the life of Tetsuo Takahashi, a teacher who wants to know everything about his half-human and monster students and staff. Takahashi will find out there is much more to these hybrid beings than he first thought.

Interview with Monster Girls features a similar premise of a human having their lives change because of their interaction with the supernatural. It also does a remarkable job displaying the hybrid humans’ concerns regarding societal differences, worries, and desires.

Fans of Miss Kobayashi’s Dragon Maid’s outlandish comedy and characters will gain a similar experience with Konosuba. Featuring distinct and colorful characters in a world of fantasy galore, Konosuba delivers a lot.

Keep in mind that Konosuba is set in a fantasy setting and doesn’t maintain the best pacing as Miss Kobayashi’s Dragon Maid. Where it’s different in those aspects, it compares in its action, themes, and offering of well-written characters.

Konosuba follows Kazuma Satou, who meets an offensive and belittling goddess named Aqua after dying. She offers Kazuma two options regarding living in heaven or a fantasy game world. He chooses the latter and takes Aqua along with him. Little does Kazuma know, he won’t be living an easy life in this new world.

Konosuba lives up to the wackiness of its premise and features its characters undergoing tasks that’ll humiliate and challenge them to adapt. As with Miss Kobayashi’s Dragon Maid, the series also utilizes fan service to enhance the hilarity of situations.

The action sequences in Konosuba will leave viewers in awe and excitement. If you’re looking for an anime with more comedy and fantasy, Konasuba’s worth a watch.

Life can be unexpected at times, for the bad and the good. Nichijou, like Miss Kobayashi’s Dragon Maid, presents five female characters undergoing unpredictable situations while going about their everyday activities.

While Nichijou’s plot isn’t fancy, its slapstick humor and comedy make up for the lackluster storyline. The main characters are all given attention and traits that help them stand out.

The series’s episodic nature adds to the superb characterization of the cast since most episodes are garnered toward each girl individually. Like Miss Kobayashi’s Dragon Maid, the anime’s art style enhances the lighthearted slice of life tropes seen in the show.

Nevertheless, Nichijou’s outstanding mixture of comedy and cuteness, Nichijou is a perfect anime to watch with loved ones and friends. 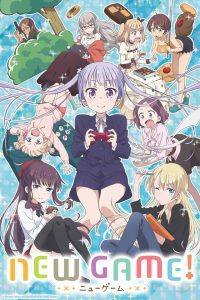 However, New Game does not contain action and fantasy elements despite the conflict centering around that genre. Despite that, the humor and shenanigans New Game’s characters undergo will give off similar vibes to Miss Kobayashi’s Dragon Maid’s cast.

The story follows Aoba Suzukaze, a girl who lands her dream job as a character designer for a gaming company she adores. Although she achieved her dream position, Aoba will realize the complications and trials she must face when working for a well-acclaimed gaming company.

In Comparison, New Game tackles themes regarding loneliness and acceptance by placing its characters in uncomfortable scenarios. Also, every character in New Game feels vital to the team and has a chance for character growth alongside Aoba.

Additionally, the series is very well animated, with the characters’ color palette giving it an air of lightheartedness. If you’re looking for an anime that delivers pretty visuals and emotional segments, New Game’s got you covered.

So there we have it, our 10 anime/TV show alternatives to watch when you’ve caught up with Miss Kobayashi’s Dragon Maid!