The Western Shores Beyond Westeros

With Game Of Thrones ending on one of the more questionable and lacklustre finales in recent memory, you may be itching for another show to plaster over the wounds left behind.

Well, we’ve combed through the archives and saved you the hassle of having to try and find something with our top 10 picks for similar shows.

So without further ado, we present 10 TV shows that should whet the appetite when you’ve finished streaming Game Of Thrones.

Following the journey of Ragnar Lothbrok, Vikings is a fascinating and often violent look into the lives of the first Norsemen in history.  Full of dramatic tension and leaning (mostly) toward historical accuracy, Vikings does a great job blending fact and fiction. In doing so, it produces a methodically paced, interesting journey through the lives of the infamous warriors of the North.

The Witcher is not without its flaws but it’s hard to discredit what a satisfying and well written slice of high-fantasy this is. There’s certainly enough magic, monsters and sword-fighting to keep things rooted in danger and tension throughout.

For those unaware, the story revolves around a monster hunter named Geralt. Vilified by human-kind, these white-haired, emotionless Witchers spend their time hunting creatures and getting paid to do so. He’s joined by Ciri, a princess in a neighbouring city, and a mage-in-training named Yennefer. Across this first season, the show balances investigative work with monster slaying really well which should please fans of high fantasy.

Set during the time of the Viking Invasions of Britain, The Last Kingdom is a well written, brutally realistic series relying on the charisma of its many characters to drive the story of Uhtred Ragnarson forward. The time period is perfectly captured in both atmosphere and set design too. If that wasn’t enough, the story draws from the rich history of Britain across 4 epic seasons of entertainment.

With a fifth season already green-lit, this is one of the better choices to fill that Game Of Thrones void.

If you swap out the fantasy setting of Game Of Thrones for pirates and high sea shenanigans, it wouldn’t be far removed from what Black Sails achieves. Split across four seasons, this sea-faring venture captures the essence of piracy beautifully and does so with some impressive visuals and an expansive story.

What could a modern day crime thriller set in the UK possibly have to do with Game Of Thrones? Yes, there’s not much similarity on the surface but the violence and action sequences in this show are easily some of the best captured on the small screen. Much like Game Of Thrones, Gangs Of London catches you off-guard and delivers some gritty action alongside its intriguing story.

That narrative revolves around warring gangs fighting for dominance of London following the death of Sean Wallace’s Father. Out for blood, powerful forces move in the shadows to try and usurp Sean’s position and take control of the city for themselves.

While Gangs Of London does falter a little in the third act, if you’re looking for a modern-day alternative to Game Of Thrones, this may just whet the appetite.

The Expanse is another choice on this list that’s bound to raise some eyebrows. However, much like Game Of Thrones this sci-fi epic thrives on its complexity and abundance of characters.

When it comes to world-building, The Expanse is one that easily goes toe to toe with the best Westeros has to offer. This sci-fi epic offers up a glimpse of a possible future where mankind has extended its reach beyond Earth to inhabit Mars and the surrounding asteroid belt.

With the story jumping between Earth, Mars and the Belt, some clever editing and a good attention to detail keeps the tension ticking away between the different characters until late in the game. When that tension spills over, it brings with one heck of a seismic shift in this show.

The Tudors is essentially a dramatic story revolving around the reign and marriages of King Henry VIII. Serving up a glorious dose of period drama, The Tudors is not always historically accurate but it is consistently entertaining. That’s before even mentioning the costume and production design which are both fantastic. 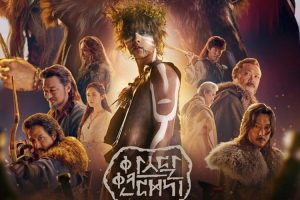 Dubbed as the Korean Game Of Thrones, Arthdal Chronicles leans much heavier into its high fantasy concepts. The story is admittedly pretty convoluted and this show will punish you if you’re not paying attention during every minute of its 70+ minute episodes.

Set in the fictional land of Arthdal during Ancient times, the story sees a military force led by Tagon rise up and seize control of the land. Prophesied to bring balance back to the world, Eunseom and Tanya front the Wahan Tribe, a peaceful colony that find themselves on the brink of extinction.

As the episodes progress, the series does become more political and with a second season already green-lit, this isn’t the last we’ll see of this Korean drama.

So there we have it, our 10 TV show picks to check out when you’re done watching Game Of Thrones.