Diving Down The Supernatural Rabbit Hole

Feria: The Darkest Light is the latest mystery box drama on Netflix, blending ideas of a cult with the supernatural and horror vibes.

So without further ado, we present 10 TV shows that should whet the appetite when you’ve finished streaming Feria: The Darkest Light!

From its stunning opening scene to the suitably bombastic climax, 30 Coins delivers a creepy, suspenseful and atmospheric show that’s sure to please horror aficionados.

The story here blends elements of alt-history akin to that seen in Dan Brown novels with a creepy underbelly of supernatural phenomena. The opening scene to 30 Coins is arguably one of the best in recent memory. Within this, a mysterious figure walks into a bank and steals a coin from a safety deposit box.

Shrugging off bullets from incredulous guards and hitting them with a barrage of his own, he steps inside a black car and hands over the coin to a shadowy priest. From here, the story only grows weirder and more frantic as the episodes progress.

To give much more away would be a disservice to this story but suffice to say, 30 Coins is well worth your time.

You can read our thoughts on 30 Coins in our full season review here!

From the onset, its obvious that there’s something unsettling lurking in the shadows of The Sinner. The first season starts just like a standard mystery thriller; a short build up leads to Cora Tannetti stabbing a man on a beach for seemingly no reason.

With the crime already committed, two key questions drives the show forward – why did she kill him and what drove her to commit this crime?

The question hangs over the show like a black cloud and when Investigator Harry Ambrose begins digging deeper, a slowly opening puzzle box of clues sheds more light on the motive.

When it comes to atmospheric mysteries, the first season is very similar to Feria: The Darkest Light.

Save Me is a pretty chilling drama with a very gripping premise. The main storyline here revolves around a religious cult known as Goseonwon which has much of the country in its grasp, boasting a large number of followers. Although they present themselves as a peaceful church, there are certainly some dark secrets lurking under this pleasant façade.

Following their son’s suicide, Sang-Mi’s family is torn apart as the cult leader Baek Jung-ki, lures them to the dark side. With her Father fully brainwashed and her Mother mentally unstable, Sang-Mi is trapped in this nightmarish hell.

There are some really tense moments here and a lot of that is thanks to the Spiritual Leader, who plays up the role of the cult leader perfectly.

With half the town submerged in water and lots of shadowy figures, Curon combines elements of The Shining and mystery dramas like Dark together with a distinct teen-drama vibe.

The story begins with a brief glimpse of the past as a violent incident involving Anna’s Mother sees her killed by a figure that looks strangely like Anna herself.

This image haunts her for years and now, 17 years later, Anna returns to the town of Curon with her two children, Daria and Mauro. As they stay in that very same hotel Anna’s childhood nightmares emanate from, thumping in the locked door upstairs, coupled with Anna’s disappearance, prove to be the catalysts for what follows.

The story and atmosphere is pretty similar to Feria: The Darkest Light, and much like that show, this one also ends on a cliffhanger too!

You can read our thoughts on Curon in our full season review here! 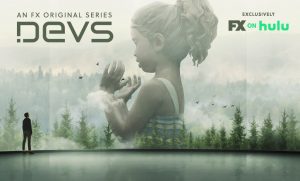 Archive 81 is a patchwork of different influences that check off all the usual horror tropes along the way. This is then thrown together around a dual timeline story that plays out as part found-footage flick and part puzzle box thriller.

The plot itself is undeniably gripping and revolves around a guy called Dan. Working as an archivist, one day he takes a job restoring a collection of damaged videotapes from 1994 for a man named Virgil Davenport.

These tapes happen to relate to a woman called Melody, who was in the midst of investigating a dangerous cult within a strange apartment complex. As Dan begins to get drawn into Melody’s story, we learn what happened to this young woman – and how Dan and Melody’s fate appear to be inexplicably entwined.

It’s not perfect, and perhaps at times it’s a little too long-winded but it’s undeniably a decent watch.

You can read our thoughts on Archive 81 in our full season review here!

So there we have it, our 10 TV show picks to check out when you’re finished with Feria: The Darkest Light.