Edge Of Tomorrow is a well written and engrossing time loop movie, one that takes a very simple concept and absolutely runs with it.

So without further ado, we present 10 movies to check out when you’ve finished watching Edge Of Tomorrow.

Alongside the excellent quality of its small screen cousin, the original big screen movie of Twelve Monkeys is just as endearing.

This sci-fi movie plays on the idea of rewriting history and revolves around a man sent back through time to stop a viral outbreak from dooming humanity.

It’s a simple idea in truth and one that works well to produce a decent 90’s thriller you’re unlikely to forget in a hurry. Bruce Willis puts on a great performance too and the movie lends itself to some decent twists and turns along the way.

Looper is another of those films that warrants repeat watches and delivers some pretty neat tricks with time. Set in 2074, the rules of the world revolve around the mob sending their target to the past to get rid of them.

When the protagonist of this tale is sent back to kill himself however, it brings with it a twisty-turny, unpredictable picture that keeps you guessing right to the very end.

This is one of those movies that plays better with its themes and tone than it does the sci-fi elements, but it’s one heck of an experience nonetheless. This one should definitely be on your radar.

Pacific Rim is a movie about giant robots beating up giant monsters. This is about as basic a structure as you could get here, but the movie does pepper in a lot of humanization to really get behind our main characters.

The story picks up right in the heart of this conflict, as the battling forces of humanity find themselves on the verge of defeat. The forces defending mankind eventually turn to two unlikely heroes to try and turn the tide of battle.

Former pilot Raleigh Becket and his untested trainee Mako Mori are teamed together to drive an obsolete Jaeger into victory. Together, they try and drive back the evil forces facing humanity.

Although much less action-driven than one may expect, Pacific Rim’s original idea and serviceable plot makes it a solid choice. 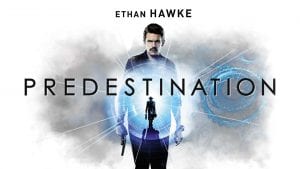 Boss Level has absolutely no right to be as good and entertaining as it is. The premise is simple but don’t be fooled by the glossy façade and wise-cracking gags; this film plays on several different layers, each more interesting and clever than the last.

Roy Pulver is our time-loop victim this time, a retired special forces officer who finds himself trapped in a never ending death loop with an array of colourful assassins lusting for blood. Despite 140+ attempts to navigate this violent labyrinth of death, Roy has never managed to progress past 12:47pm.

Slowly, Roy begins to piece together fragments of the time before his infinite-day. It’s here where Boss Level starts to move beyond its quirky opener, shifting its central plot-driven question from ‘what’ to ‘why’.

This Hulu Original is definitely one of the best films to come out of 2021.

You can read our thoughts on Boss Level in our movie review here!

If you’re looking for something with a similar sci-fi vibe to Edge Of Tomorrow, Minority Report is well worth a watch. Set in the year 2054, Minority Report revolves around a special police unit called “Precrime” who jump back through time to arrest criminals before they break the law.

The result of this is a utopian world where crime is non-existent. All seems well until Anderson (our protagonist) is predicted to commit a murder in the next 36 hours.

With Anderson unaware of who his victim is, he sets out to try and uncover what’s happening and prove himself innocent. Expect plenty of action set pieces, crazy twists and a brilliant third act that ties everything together.

Triangle is a clever film. It’s a movie that takes a simple mystery and folds it into an origami-shaped brain-twisting puzzle. The story works on several levels, and definitely benefits from repeat watches too.

The story revolves around Jess, a young girl who heads off on a yacht with a group of friends. The whole time though she feels like something is wrong, crescendoing into a storm that forces them to seek shelter and refuge on a passing ocean liner. Only, Jess begins to feel a sense of Deja vu, like she’s been on this ship before.

With someone seemingly hunting them down, it’s up to Jess and the others to figure out what’s happening before it’s too late.

Cleverly written, full of some great reveals and incredibly tense, Triangle is certainly a time loop movie you should check out.

This movie is dripping in tension and really puts the thrill in the word thriller. Much like Edge Of Tomorrow, this movie isn’t trying to be anything but an entertaining flick, and that really helps Source Code stand out.

What begins as a simple idea of catching bullets and stealing paintings, soon progresses to a concept so horrific and mind-bending that – if completed – could cause the end of everything, everywhere, forever. A total collapse of time itself.

Nolan’s latest time-bending feature is as convoluted as it is technically impressive. Our story here revolves around a man known simply as ‘The Protagonist’.

Alongside his trusty partner Neil and armed with only one word “Tenet”, our protagonist finds himself fighting for the survival of the entire world. This espionage heist brings the Protagonist into a world unlike any other through the concept of inversion.

It’s definitely recommend to watch this one with subtitles, given the sound mixing and muffled dialogue, but it’s certainly an enjoyable and enthralling watch nonetheless.

You can read our thoughts on Tenet in our movie review here!

So there we have it, our 10 Movie picks to keep you busy after watching Edge Of Tomorrow.