Youth of May Plot Synopsis

Youth of May is a well written romantic drama set during the middle of the 1980’s during the Gwangju uprising. A romance blossoms between Hee-Tae and Myung-Hee but their love is pushed to the limits as a much larger threat sees the future of Korea hang in the balance. 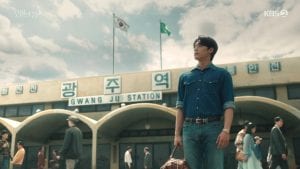 Who is the man at the train station?

During the very first episode we see a man wearing a hat standing at the train station. As news breaks about the Uprising, he begins sobbing while holding a locket in his hand. During the finale we learn that this man is Kim Kyung-Soo, the soldier who let Myung-Soo go in the woods. He was part of the squad responsible for killing Myung-Hee while she tried to protect her brother.

Kyung-Soo has been wracked with guilt since then, holding onto the watch locket as memorabilia to remind him of what happened that fateful night. During the end of the last episode he hands over the locket to Hee-Tae as he struggles to hold back tears.

She does, unfortunately. One of the tragic victims of the Uprising is Myung-Hee, who dies protecting her brother from a fatal bullet. Her selfless act serves as one final act of bravery from a woman who has done everything to protect others throughout the season. Her tragic death serves as a reminder of the needless loss of life during these uprising.

What happens to Myung-Soo and the others in the future?

During the flash-forward sequences we catch glimpses of some characters but not everyone. Myung-Soo is now working as a priest, having seemingly found solace in God after the death of his sister and father. There’s no word of where Jung-Tae and Ki-Nam are though, although it’s safe to assume that he and Hae-Ryung did get divorced.

Soo-Ryeon meanwhile, is now working as a lawyer while Hee-Tae is at the university as a professor.

How does Youth of May end?

As mentioned above, Myung-Hee is shot out in the woods while Hee-Tae survives courtesy of a soldier claiming to know who he is. He manages to get away, as does Myung-Soo.

During the flash forward sequences, Hee-Tae is handed the locket and a letter that Kyung-Soo has kept on him all this time. Within the letter it asks Hee-Tae to have strength and swim through life with clarity. It’s been 41 years since Hee-Tae has lost Myung-Hee and the pain is still as raw now as it was way back then. Hee-Tae narrates the final scenes, telling us that he’s doing his best to live. As he walks from the graveyard, we fade to black.

What is the Gwangju Uprising?

For those unaware, the Gwanju Uprising marks a pivotal moment in South Korean history. Between May 18th and May 27th in 1980, it’s estimated that around 600 people lost their lives. During this period of time, Gwangju citizens took up arms after the shock of seeing local Cjhonnam University students fired upon, beaten and killed by Government troops.

If you’re interested in finding out more, there’s a great article detailing everything in meticulous detail. You can find that by clicking here

Thanks for reading our Ending Explained article! What did you think of Youth of May’s ending? Did you cry too during the emotional moments involving Myung-Hee’s death? Let us know your thoughts in the comments below!

Click Here To Go Back To Our TV Show Reviews!

5 thoughts on “Youth Of May Ending Explained – Do Myung-Hee and Hee-Tae survive?”