As we reach the end of this decade, 2019 reinforces what a fabulous time it is to be a gamer. Between record-setting games pushing the technical limitations of home consoles and PCs, through to stand-out Indie gems that manage to hold themselves up as a meaningful piece of art in their own right, 2019 has been a celebratory year of heavy hitters and Indie sweethearts.

Taking feedback onboard from the community, Frontier developed a spiritual successor to Zoo Tycoon last month, one that managed to tighten up the management sim aspects that were sorely lacking in Planet Coaster whilst delivering a gorgeous, sprawling game chock full of realistically depicted creatures and challenging scenarios.

While it doesn’t quite knock Zoo Tycoon from the podium as best zoo simulator, it certainly comes close to achieving this feat.

Days Gone is a chore to play at times. Between the motorcycle maintenance, fetch quests partway through the adventure and a lack of hordes until late on in the game, you’re probably wondering why this game made the list of best titles from 2019. Much like HBO’s series Watchmen, Days Gone is a slow burn but if you can persevere through the early hours, Sony’s exclusive delivers in a big way, with an emotional climax and some wonderful gameplay late on.

Seeing all these elements come together and reflecting back on your journey at the end was one of the more rewarding experiences this year but it’s one that’s certainly not for everyone.

Sekiro: Shadows Die Twice is the perfect challenging gift for Souls players. The difficult, brutal gameplay combined with the gorgeous aesthetic of feudal Japan combines nicely to create one of the more unique experiences this year. Unfortunately the lack of combat variety and an alienation for newcomers to this style of game make it much more of an acquired taste than it perhaps should be.

Still, there’s no denying the positive acclaim this game has had and fans of the genre have certainly taken to this one, making it one of the better, and more polarizing, games of the year.

While Bethesda continue to shoot themselves in the foot with every Fallout 76 blunder, Obsidian rose up from the ashes of the open world roleplaying genre to deliver a real sci-fi gem in The Outer Worlds. Combining the best elements of their previous effort, Fallout: New Vegas, and crafting a return to the actual roleplaying elements of old, The Outer Worlds felt both overly familiar and a refreshing change to a genre that felt on the verge of stagnating.

Arise is a wonderful little Indie gem. It’s a perfect example of how to take a simple gameplay mechanic and craft a beautiful and engaging story around that idea. Across 10 levels, the wonderful soundtrack and gorgeous visuals combine to make this journey an absolute pleasure from start to finish. Taking the best parts from Journey, Flower and Braid, Arise delivers its story with flair, wrapped up with some important themes around loss, joy and life at its core.

Another little AA gem this year, Concrete Genie is a beautiful and innovative journey that tackled important subjects like bullying and depression in an imaginative way. With some engaging and clever painting mechanics at the helm and a nicely worked story across its run-time, Concrete Genie may not be a 30+ hour sprawling adventure, but it is a profoundly interesting game that has a lot of thought provoking themes at its core.

When it comes to satisfying combat, simple but effective combos and great replayability, Devil May Cry 5 certainly fits the bill for all this. While its story is hardly that innovative, the tightly refined combat made this one of the best hack’n’slash games and a perfect illustration for how to implement replayability in a challenging and fun action hack’n’slash. It’s an easy game to recommend and even for fans that are new to this game series. DMC5’s fun and challenging combat make this well worth checking out.

When The Division 2 was first announced, it was met with scepticism around whether Ubisoft would be able to make good on its premise and deliver a consistent and well-paced multiplayer adventure. One that also doubles up as an enjoyable single player title too.

Thankfully, Ubisoft knocked it out the park when The Division 2 released and despite a pretty generic storyline for its campaign, the much-improved gunplay, interesting world design and some impressive multiplayer action makes this a worthy sequel boasting hundreds of hours of content.The steady stream of DLC and added post-launch content helped too, keeping this one fresh long after its initial March release. 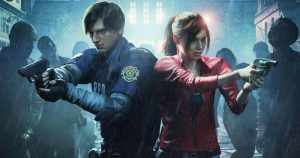 Resident Evil 2 is the perfect example of how to do a remake properly. With tightly refined controls, a faithful story and some great bursts of nostalgia throughout, Resi 2 managed to capture the essence of what made the PS1 title so good and polished that formula up to make it one of best games of 2019. It effectively raised the bar for all remakes to follow and set a new benchmark for how these titles should be handled.

A Plague Tale: Innocence is not a particularly long game. Nor is it particularly innovative when it comes to its combat or stealth mechanics. What it does do, however, is stand as a refreshing example of how to take a simple mechanic and expand that out to create something original, interesting and unique in a time period few games venture into. The character journeys for our two leads are perfectly paced, with a realistic relationship between the siblings, culminating in an emotional and exciting finale.

A Plague Tale: Innocence makes a conscious effort to prevent the game ever feeling repetitive or mundane and with a combination of stealth and action, the game certainly achieves this. The rat swarms are genuinely terrifying and creepy to look at and throughout the game the way these are manipulated constantly evolves and grows the deeper you progress through the game.

So there we have it, out top 10 games of the year. There were casualties, some omissions and some games we really wanted to play but just ran out of time to get through sadly. Death Stranding and Disco Elysium were noticeably absent here, specifically the latter which we didn’t manage to play through while the former felt far too polarizing to place on the list.

With 2019 drawing to a close, 2020 promises to be a big year for gamers and with next-gen consoles on the horizon, we truly are in the golden age of gaming.