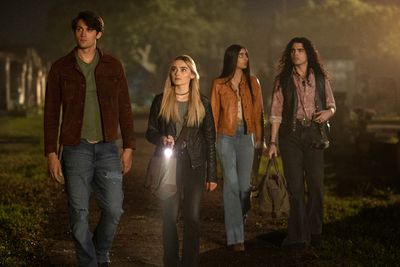 Two years after the extremely successful and popular CW show, Supernatural came to an end, the network is now coming back with a new spin-off around the Winchester Family that hunts demons and monsters for a living.

Going way back in time before Season 1 of Supernatural, The Winchesters takes a look at Sam and Dean Winchester’s parents John and Mary. The Winchesters is a love story that takes fans back to the time when Dean was looking for Dad (John Winchester) and his infamous line, “Dad’s on a hunting trip and he hasn’t been home in a few days.”

The new spin-off series shows Dean finding out how his dad became a hunter and how he met Mary. With a retro and comedic take to the 15-year-long emotional and fun show like Supernatural, CW has now come up with a backstory that will show fans the insane adventures that made John fall in love with Mary and how he too started hunting for demons after meeting her.

If you’ve been following Supernatural, you may be curious to find out when the new CW Original is releasing. Well, wonder no more!

Here is everything you need to know about The Winchesters Episode 2, including its release date, time and where you can watch this.

Episode 2 of The Winchesters will release on Tuesday 25th October at 8pm ET/PT.

Expect Season 1 to have 13 episodes with each episode being roughly 1 hour long. Also, expect episodes to drop with subtitles too.

In Episode 2 we saw John, Mary, Carlos, Lata and Ada team up to find Samuel. After fighting zombies, Mary finds bullet casings with her father’s initials. She is sure where she will find her father and leads the group on to a hunt. The group fights a new kind of creature that feeds off of disobedient children. After having John’s life, almost on the line, the group is able to kill the creature and find more hints that lead them to Samuel.

The next episode will focus on Mary and how she puts herself as bait to kill a monster that resembles a boogeyman.

Is There A Trailer For The Winchesters Season 1 Episode 3?

There is indeed! You can find a trailer for CW’s The Winchesters Episode 3 below:

We’ve got the whole episode covered with handy (and lengthy) recaps, detailing all the big plot points and discussing the chapter with an accompanying review. You can find that below:

What do you hope to see as the series progresses? What’s been your favorite moment of The Winchesters so far? Let us know in the comments below!