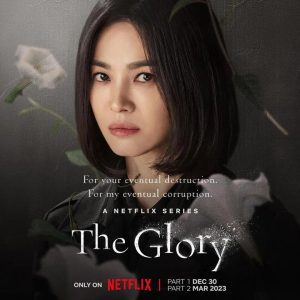 There Will Be No Glory

Episode 4 of The Glory starts with a flashback to 2012, Dong-eun remembers the gang bullying her in the gym and all the people who knew but did nothing.

Yeon-jin loses her cool after the award ceremony and slaps Dong-eun in a confrontation. Dong-eun remains calm and Jae-joon tries to calm Yeon-jin down. Dong-eun leaves the gym after congratulating  Yeon-jin and promises to watch her broadcast.

Meanwhile, Myeong Oh finally reports to work and Jae-joon asks him to find out what Dong-eun has been up to. Myeong Oh asks him if he slept with Dong-eun in the past and that annoys Jae-joon.

Elsewhere, Yeo-jung leaves the hospital to attend his late father’s death anniversary. We learn that his dad was killed by a patient he saved.

On the other hand, the bully gang is reeling from their last meeting with Dong-eun. Sa Ra suggests that Myeong Oh should investigate Dong-eun but he is not particularly inclined to do that job. He wants to be paid first.

Ha Ye Sol calls her mom to tell her she spilt milk all over her shoes at school and she is barefoot. She informs her mom that she has a new homeroom teacher and Yeon-jin is shocked to learn that Dong-eun is the new teacher.

Chairman Kim Shin Tae personally introduces Dong-eun to the school faculty and one of the teachers assumes that Dong-eun is the chairman’s mistress. Dong-eun introduces herself to her class and sets a few rules.  She tells her students that she will not allow bullying and their parents’ wealth will not be factored into her class.

Yeon-jin rushes to the school to confront Dong-eun. Dong-eun tells her that it is no coincidence that they are meeting again. She reminds her that she once told her that she is her dream. Yeon-jin tells her that a nobody like her doesn’t stand a chance to ruin her and asks her to do her best.

As she leaves the classroom, she receives a message informing her that Teacher Kim Jong Moon is dead. In a flashback, we learn what happened when Dong-eun visited him. His son Su-han had come home excited that he passed the first part of the School Inspector Exams.

Teacher Kim Jong Moon remembers who she is and starts attacking her with the flowers she brought. His son holds him back and asks Dong-eun what the problem is. Dong-eun tells him that she decided to tell him before he posted on the official forum about what his dad did to her when she was 17 years old.

His son decides to use his father’s asthma condition to kill him and make it look accidental. He tells his father that if the rumours start spreading, their reputation will be tarnished. He is so close to achieving his dreams and he can’t let his dad’s past get in the way. In order to avoid a shameful life, he needs to die.

In the meantime, Hyun -nam follows Hye -jeong and Dong-eun meets her old school nurse. The nurse sent over the photos she took of the burns Dong-eun suffered at the hands of the gang. The nurse assures her that she is rooting for her in her quest for revenge.

Dong-eun later meets Myeong Oh and he tells her that he is all in with her plan. He gives her Sa Ra’s drug account book and information on the guy Hye -jeong is currently obsessed with. He asks about the results of Jae-joon’s DNA test. Dong-eun tells him that it matched and that Jae-joon has a child but that is her card to play.

She sends him to a mortuary and Myeong Oh believes that the information from the morgue will make him some money. He goes to the morgue and the attendant informs him that they are still holding So-hee’s body. Her parents have refused to bury her as they believe she didn’t commit suicide. The attendant asks him to talk with the family and get consent to take the body.

After learning that Dong-eun is teaching her daughter, Yeon-jin becomes nervous that her daughter will undergo the same torture she put Dong-eun through.

Meanwhile, Dong-eun returns to the place she plays Go and meets Ha Do-young (Yeon-jin’s husband.) He has been visiting the place hoping to see  Dong-eun again. They play a game of Go together and Do-young tries to learn more about Dong-eun.

She keeps her answers short and mysterious while focusing on the game. She wins the first round and he asks her to play a second round for fifty thousand Won. Dong-eun takes him up on his offer

It is interesting to see how different Ha Ye Sol is from her mom. She is kind and sweet compared to her evil mom. I hope Dong-eun is not planning to get her revenge on Yeon-jin by stealing her husband, that is so cliche and definitely not befitting this drama, which has been excellent so far.

Karma really came for Teacher Kim Jong Moon though, he died at the hands of his own son. Tragic, am i right?

Lastly, when will we start seeing more of Yeo-jung, we need to know where exactly he fits in this grand revenge plan. Don’t you agree?