Four years on from its release in 2017, Horizon Zero Dawn remains one of Playstation 4’s brightest exclusives. Produced by the talented team over at Guerrilla Games (responsible for producing the excellent Killzone series too), Horizon Zero Dawn is an epic, highly imaginative game bursting with charm and tight mechanics.

Many games boast hundreds of hours playtime with a world as big as an ocean but as deep as a puddle (hello Assassin’s Creed: Valhalla.) These expansive titles feel more of a grind than they should. Exploration is no longer enjoyable and instead devolves into following a decreasing counter on the map while pushing forward.

When it comes to open world games that stave off this laborious ordeal, Horizon Zero Dawn is absolutely pitch-perfect. The balance between exploration and gameplay is fantastic and the only other title that comes close to this in recent years happens to be last year’s Ghost of Tsushima.

For those who have never played Horizon Zero Dawn, the story takes place during the 31st Century in our future. Post apocalyptic United States is choked in greenery, with nature having reclaimed large swathes of the “old world”. The remnants of humans remaining here live in scattered tribal-like populations with limited access to technology.

The echoes of our near-future world is largely reserved to ruinous skyscrapers or deep bunkers holding numerous secrets to the past – and what happened to lead humanity down this disastrous path.

At the center of uncovering this shocking truth is Aloy, a curious young outsider who’s shunned by the Nora tribe and forced to live on the outskirts with her protector and father figure, Rost. Through Rost, Aloy learns more about this world before a big event turns her entire world upside down. You see, this world isn’t ruled by humans anymore. Some time in the future, robots slowly gained sentience and claimed the world for themselves.

Playing as Aloy, it’s your job to stop this machine threat whilst simultaneously learning more about your ancestral past. These two plot-lines interweave beautifully together, dancing through 20-25 hours worth of story. If you’re looking to explore everything this world has to offer, expect to spend another 10-15 hours on top of that for the coveted 100% completion mark.

I mentioned before about the world-building and Horizon Zero Dawn paints a very bleak but beautiful portrait of the future. Numerous text logs and audio recordings shed a lot more light over what happened in the past, and how the world has come to be in this state. However, if you don’t fancy reading through these logs, Horizon Zero Dawn goes a lot deeper than that to flesh out its world.

Each of the tribes have unique songs performed at different times of the day. The capital city of Meridian is located high up away from machines, with farmland outside full of crops ready to harvest to bring inside. Each of the different tribesmen speak in specific colloquial language, with a lot of sun-praising and even armour and clothes made from bits of machines differing between parts of the world. These are subtle inclusions but they go a long way to make this world feel alive.

Of course, storytelling and world-building can only go so far. The Killzone series is synonymous with tight controls and fun gunplay, which is something that extends across to Horizon Zero Dawn too. This is obviously not a shooter, and Horizon’s changed third-person perspective serves up a vastly different proposition from what Guerrilla Games have tackled before. But boy do they make it look easy.

There’s no stamina for sprinting (hooray!) and a simple but effective set of controls that maximize your effectiveness in battle. Most of the action stems from bow and arrow firing (although there is also melee strikes too), with L2 working to draw the bow back and R2 firing said arrow. It’s a simple system, one that’s fleshed out further by pressing O to roll, square to duck and a few different weapons including bombs and tripwires. Each of these have their own tutorials so I won’ go into detail here but the variety helps make action rewarding and highly enjoyable.

Each machine killed, quest completed and tutorial checked off all grant experience points, which in turn goes toward leveling up. These level gains add an extra +10 to your health bar and grant a skill point. These skill points effectively enhance your scavenging or combat skills, which in turn make you more effective in combat. Early on you’ll find yourself weighing up the pros and cons of each ability but to be honest, by the end of the game you will have unlocked almost everything here.

There’s a whole swathe of different machines and humans to face off against, although the latter are pretty easy to dismantle with a well-placed headshot or two. Machines however, are a lot more tricky. While the simple “Searchers” can be dispatched with a few arrow bolts to the glowing red eye, larger machines need to be handled a little differently.

Each of these aforementioned machines can be scanned through the use of Aloy’s handy “Focus”, a gadget found down in the bunkers of  the “Old Ones” very early in the game – which highlights different weaknesses.  These can then be removed by multiple arrow shots to that area, making fights easier to swing in your favour.

Scrappers are quick and come armed with an energy cannon on their backs. Destroying this gun allows you to take your time with picking off well-placed arrows to the face. By comparison, Longlegs have a weak point just under their neck, with numerous shots to the same point causing the part to explode into a flurry of icy-cold particles.

This simple but effective inclusion helps to make fighting a lot more interesting. In fact, the same can be said for some of the busywork around the world.

The usual “towers magically destroy fog” trope crops up here too but in a much more imaginative way. Tallnecks are essentially gigantic giraffes, wandering about with a large head that can be “hacked.” In doing so, more information about the region is unlocked, including machine areas, unlockables and points of interest. Of course, vendors also hold some valuables, so do be sure to unlock the special spots for vantage points, banuk figures and metal flowers if you’re looking to 100% complete this one.

The side quests themselves are more of a mixed bag. Most of the missions in the game fall into fetch quests, destroying monsters or investigative work which can become cumbersome and annoying.

The Witcher 3, Batman, Assassin’s Creed and more all include this same breadcrumb trial of following footsteps, examining crime scenes and finding the set piece at the end. The same is true here and while it is engaging enough to stick with, there’s really not a lot of depth to this and these moments are easily the worst of the entire game. It’s also pretty surprising just how much longevity Horizon Zero Dawn gets out of this. 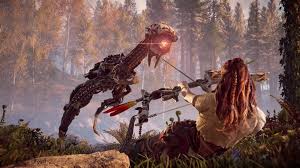 Aesthetically though, Horizon Zero Dawn more than makes up for these shortfalls. The graphics are incredible, with the latest PS5 patch helping performance tremendously. The world is incredibly detailed, with a varied colour palette and some truly memorable locations. That’s to say nothing of the character models either.

Aloy – both as a child and adult – is easily one of the most detailed protagonists seen in quite some time. The facial features are realistically rendered while the smooth transition from cutscene to gameplay is another highlight.

This spills over to the sound design too which is fantastic. Composed by Jonathan Williams, Joris de Man, and The Flight, the soundtrack mixes upbeat, urgent battle music with a lot more tranquil, mysterious tracks – all of which fitting seamlessly into this world.

Thankfully the voice acting is also very good, with Ashly Burch bringing Aloy to life in the best possible way. The real stand-out here though is the ever-talented Lance Reddick, who bring the mysterious Sylens to life with the perfect amount of intrigue and unnerving suspicion.

This is a bold, striking vision of the future brought to life by a studio that absolutely bring their A-game from start to finish. The quality of the world-building, storytelling and gameplay combine to create a cocktail of heady brilliance; Horizon Zero Dawn is the gold standard for how open world games should be made.

Click Here To Go Back To Our Game Reviews