You’re In For A Scare

With Halloween upon us, what better time than now to curl up with a terrifying, spooky or spine-tingling series. Out of all the horrors available, there’s a few that stand out for all the right reasons.

Whether it be outright frights and well-placed jump scares or nostalgic, timeless classics, we’ve compiled our 18 favourites for you to watch.

Even with a few wobbles late on, the excellent work done prior to this makes it easy to forgive any blemishes the show may have.

Word of mouth helped this show grow a lot and it quickly became the series everyone was talking about in 2018. It deserves recognition for managing to keep up suspense and tension over 10 hours, which is certainly no easy feat. Haunting Of Hill House is quite simply a benchmark for all TV horror to aspire to.

With four delightfully sinister tales to choose from, Channel Zero’s four-season run makes for really compelling viewing. However, our top pick remains season 1 which is arguably the creepiest of the bunch.

With a new spin on The Tooth Fairy (pictured above) and some seriously creepy dolls, this one is worth its weight in gold.

The rest of the seasons are good though and tackle a variety of different ideas that should get your bones shivering.

Interwoven around Mulder’s sister being abducted are numerous stand-alone slices of horror and hidden gems across the 12 seasons. Above, we’ve selected our 8 favourites if you want a quick dose of horror. However, the whole show offers up some real gems.

Do be aware though that the rebooted seasons are nowhere near as good as the originals.

Split across 10 episodes, Strangers From Hell is certainly a shorter offering than the usual 16 chapter Korean dramas. The story revolves around a boy called Jong-Woo who moves to Seoul and finds himself abandoned and alone inside a creepy apartment block.

Strangers From Hell isn’t particularly scary but it does hold up as a compelling psychological thriller. There’s some pretty gruesome scenes midway through and a couple of genuinely shocking segments. This one is not for the squeamish but should be enough to reach those looking for a dose of anxiety and paranoia from their horror.

You can read our thoughts on Strangers From Hell in our full season review here!

Shut Up and Dance

Black Mirror is still the go-to for most people looking for a dark slice of sci-fi. While the later episodes do wane in quality, there’s no denying that some of the early episodes are absolutely fantastic and certainly touch on horror.

With an uneasy dread clinging to this one, Black Mirror makes for a really easy recommendation and one you should absolutely check out if you haven’t already.

The TV adaptation of The Exorcist has absolutely no right to be as good as it is. It’s also one cancellation that remains a bitter pill to swallow to this day. The series adaptation of the critically acclaimed film follows pretty much the same story but dives a lot deeper into the various characters and lore.

There’s some really creepy scenes here, including one infamous Jenga game during season 1. With two seasons to get through, The Exorcist serves up enough bang for your buck but sadly resides as another casualty to add to the chopping block.

While The Terror is much more geared toward out-and-out horror (at least in season 1), the supernatural elements are definitely a mainstay of this series and should please horror enthusiasts.

The characters within The Terror are all well written too – across both seasons. Despite its anthological format, The Terror manages to put a new spin on old horror tales but season 1 is ultimately our go-to recommendation. The dread, paranoia and claustrophobia are perfect.

Probably the most dubious one on the list. Yes, American Horror Story is not scary. However, many fans agree that the second season is the best of the bunch and does feature some surprisingly good episodes.

The creepy asylum is just the right amount of unnerving and although the other seasons have their moments, season 2 is by far the most effective. 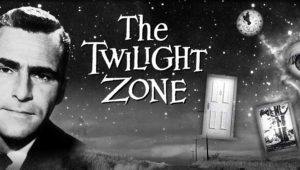 And When The Sky Was Opened

The Monsters Are Due On Maple Street

The Crème de la crème of anthology series; The Twilight Zone is a classic in every sense of the word and a mainstay for any sci-fi or horror fan.

Not to be confused for the lacklustre 2020 reboot or the forgettable re-reboot in the 80’s, the original’s combination of horror, thought provoking ideas and sci-fi make this a wonderful show to watch.

Even all these years later, The Twilight Zone holds its own and if anthological bites of horror are your jam, this one will most certainly be worth checking out.

Doctor Who is one of the longest running sci-fi series of all time. Since the 60’s, this show has constantly thrown a number of different lead actors into the role while utilizing the brilliance of its writing team to deliver compelling and unforgettable stories.

On a rare occasion or two, Doctor Who dabbles into horror territory. Whether it be a gas-mask wearing child, the Weeping Angels or a copycat killer, the show is not afraid to deliver a showstopper or two from time to time. There’s only a few across the 12 season run but these three are great choices.

You can read our thoughts on Doctor Who in our full season reviews here!

Buffy The Vampire Slayer is one of the most iconic shows in terms of paving the way for strong female characters. Its forward thinking ideas of relationships, storytelling and timeless comedy makes it a show that holds up to this day.

Alongside Once More With Feeling, Hush is a stand-alone episode that effectively switches tone for a single monster-of-the-week masterpiece.

When The Gentleman arrive in town, Buffy and the Scooby gang find themselves without a voice and stalked by these murderous demons. It’s creepy, surprisingly funny and certainly worth a watch.

Mads Mikkelsen does an incredible job portraying the cold, ruthless Hannibal Lector and the characters are well written and certainly grow across the seasons. The show puts a good spin on the crime genre and does well to blend that in with some pretty creepy and gruesome scenes.

Are You Afraid Of The Dark?

Tale of the Dead Man’s Float

Tale of the Dollmaker

Tale of the Midnight Madness

Tale of Laughing in the Dark

While Are You Afraid Of The Dark is tailored toward kids, there’s no denying that some of the stories are pretty creepy. There’s an array of different tales to choose from and while some have aged poorly, others certainly have not.

Unlike Goosebumps, there’s some genuinely unnerving stories and creatures lurking in the depths of this anthology. If you fancy something a little spooky but less outright horror, this one is a solid blast from the past

It’s one of the few shows that balances the action with drama nicely. This one is full of tension and suspense too, leading to the welcome prospect of a possible third season on the horizon.

You can read our thoughts on Kingdom in our full season reviews here!

For those unaware of the original show from the late 80’s/early 90’s, Unsolved Mysteries is essentially the real-life version of The X-Files combining true crime cases and mysteries with an edge of paranormal and weirdness for good measure.

The result is something that immediately feels right at home on Netflix given the platform’s dominance of the genre and the changes made to update this to a brand new audience are certainly welcome.

You can read our thoughts on Unsolved Mysteries in our full season review here!

With decent pacing, some nicely worked scares and an unsettling atmosphere, Marianne takes the best elements from a number of different horrors and blends them together to deliver a frightfully good horror series.

With elements of Haunting Of Hill House, Scary Stories To Tell In The Dark and Stephen King, Marianne is a deliciously dark cocktail of horror that continues to impress right through to its finale.

You can read our thoughts on Marianne in our full season review here!

Armed with a gnarly, grim aesthetic, Swamp Thing is a surprisingly faithful, well written horror series. With roots firmly hooked to the comic books of the same name, the story follows researcher Abby Arcane who returns home after an extended leave working with the CDC.

Despite an initially frosty reception, she quickly gets pulled into a strange, horrific tale that sees local scientist Alec Holland transformed into the monstrous swamp creature.

While the ending is disappointing, there’s some good moments dotted throughout this one that make it well worth a watch.

Twin Peaks is one of those classic, quintessential shows from the 90’s that sticks with you long after the final credits have rolled. The simple story about a peculiar FBI agent investigating the murder of a young woman in the even more peculiar town of Twin Peaks is simple but surprisingly effective.

It’s one of those rare gems that completely changed the landscape of the small screen and what could be achieved with horror through this medium. There’s some genuinely creepy moments along the way, typified by the stunningly horrific nightmare montage in the episode “Lonely Soul.”

If you haven’t watched this already, you absolutely should. It’s certainly one of the better series out there.

So there we have it, our 18 TV show picks to check out this Halloween.