Goodnight Mommy is a remake of an Austrian movie of the same name. It focuses on twin brothers Elias and Lukas who visit their famous mother at her country home. On arrival, they discover something strange about their mother. Not only is she wearing a medical mask but she is very different to the person she used to be. Gone are her warm and caring motherly tendencies. Instead, she is cold and distant and sometimes quite aggressive towards the boys.

Let’s have a closer look at the movie.

Why is the ‘mother’ wearing a mask?

On arrival at their mother’s home, they are surprised to see her wearing a medical mask. This is clearly a surprise to them but she explains that she has had cosmetic surgery and she is wearing the mask until her face heals.

As their mother is an acclaimed actress, it’s not surprising that she might want to retain her beauty. However, there are clues to suggest the woman isn’t their mother after all. As such, it could be that cosmetic surgery is just a convenient way to hide the potential imposter’s identity. Why do the boys think their mother is an imposter?

Shortly after arrival, their mother gives them some rules. She tells them not to go in the barn, not to make noise, and not to enter her bedroom or office.

It’s not like their mother to make rules like these so this causes Elias and Lukas to be suspicious.

Their suspicions are further aroused when she refuses to sing them the bedtime lullaby that she sang to them when they were younger. She tells them they are too old for goodnight songs but the boys doubt her explanation as they suspect she is an imposter who doesn’t know the words to the lullaby.

The masked woman also throws away a picture Elias gives to her of the family standing together. This is further evidence that she might not be who she claims to be as their mother used to keep their pictures.

Then there are the woman’s eyes. The boys remember her having blue eyes and they find a picture to confirm this. But the woman they are living with has green eyes!

When they later go against the woman’s rules and investigate the barn, they notice blood on the wall. At this point, the woman enters the barn and acts aggressively toward them. Again, this behaviour is quite unlike that of their mother.

The boys run away and find shelter in a neighbour’s barn. But when the owner alerts the police, the boys are taken back to their mother’s home. They tell the police the woman living there is an imposter but when the police see the woman, she is without her mask and looks exactly like the boys’ mother.

Elias is sent to his room by the woman but he listens in on the conversation between her and the police. She hears the woman say “He was playing by the pool and must have slipped on some water. It’s terrifying, that line between reality and fantasy—it’s vanished.”

What do these words mean? We find out later in the movie.

Is the woman the boys’ mother?

The boys are still unconvinced about the woman’s claims to be their mother and they think she is a stranger that has had facial reconstructive surgery to look like her.

When she is asleep, they duct-tape her to her bed. When she wakes up, Elias douses her with cold water and demands to know where their real mother is. She tells them she is their mother and when asked about the change in her eye colour, she tells them that she sometimes uses coloured contact lenses.

They are interrupted by the police who have called to check on them. They ask where their mother is and Elias tells them she has gone out somewhere. One of the police is a little unbelieving of this story but when they are called to another job, they leave the boys at home.

Elias and Lukas then run away. But before they get far, Elias tells Lukas he has forgotten his toothbrush. On his return to the house, he finds his mother’s coloured contact lenses.

Now realising that the woman is his mother, he unties her. However, there is another mystery still to be solved. While she isn’t an imposter after all, there is somebody else in Elias’s life that isn’t who they claim to be. The clue to this is in the barn where Elias’ mother takes him to make him face up to the truth.

What does Elias find in the barn?

Elias’ mother tells him to look at the blood-stained wall in the barn. It’s here that he and we notice a bullet hole on the wall.

We learn from Elias’ mother that when he and Lukas were younger, the two of them played with a loaded gun. This resulted in a tragic accident when Elias shot Lukas by mistake.

Lukas was killed but when the mother tries to make Elias face up to this reality, he lashes out at her. She falls from the barn attic and hits the ground below. The lantern she was carrying breaks and it causes the hay to burst into flames.

Elias runs from the barn while behind him the building burns with his mother still inside it. While struggling to comprehend what has happened, Elias looks up and sees both his mother and Lukas coming toward him.  They embrace and his mother tells him that he has done nothing wrong. 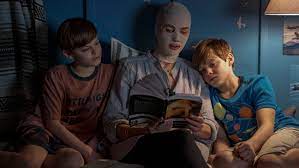 Are Elias’ mother and brother alive?

No. It’s clear that Elias is having trouble separating reality from fantasy, which is something his mother talked about earlier in her conversation with the police.

When Elias sees them at the end of the movie, they are hallucinations. This points to the fact that the Lukas we see throughout the movie was also a figment of Elias’ imagination. If you rewatch the movie, you will notice that the mother only talks to Elias and not Lukas, which is a sign that Lukas was never really there. You will also notice that Lukas sometimes appears as Elias’ reflection rather than a living, breathing human being.

Elias’ delusion is a result of the guilt and grief he felt after his brother died. As a way of dealing with the trauma that happened and the loneliness that he felt, he built a world where his brother still existed.

His mother’s behaviour earlier in the movie was also a result of the trauma. She was distant towards her son because of her own grief, which likely resulted in anger toward Elias for accidentally killing his brother. She probably threw away the picture that Elias drew for her because she didn’t want to be reminded of her now-broken family.

The movie is less a horror movie and more a study of grief and how it can affect us. The original 2014 movie had the same themes but be warned, if you do watch the Austrian original, you will discover a move that is far more grim and violent than this one!