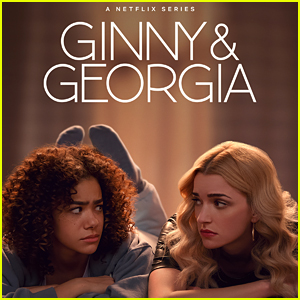 Episode 1 of Ginny & Georgia season 2 starts with Ginny remembering growing up and idolizing her mom. She has a nightmare of Georgia suffocating her with a pillow. She wakes up alarmed, and her dad checks in on her.

Elsewhere, Maxine is happy welcoming her grandparents for Thanksgiving but Marcus is not in a thankful mood. His mom tries to threaten him to attend the dinner but he couldn’t care less.  He is more concerned about  Ginny and asks Maxine if they have talked lately. Maxine is still angry with Ginny and doesn’t care what happened to her.

However, Georgia is feeling the absence of her two kids. Paul asks her if she misses the kids, she has not spoken to them in two weeks.  Georgia denies it and says she is giving them space since they ran off without a word. Paul thinks they are rebelling because their mother is getting remarried. Georgia changes the topic and says she is nervous to meet Paul’s parents. Paul assures her that his parents will love her.

In a flashback, Ginny remembers her conversation with Jesse about her mom being a possible murderer. Austin disrupts her thinking and asks when they are going back home.  He also wants to know why their mom doesn’t care they ran away. Georgia hasn’t called them since they left.

Ginny tells him that their mom cares and that if he misses home he can go back. Ginny regrets saying that to him and apologizes. Zion thinks Ginny is angry about her mom marrying Paul. He is hoping the Thanksgiving dinner with his parents will cheer her up. Zion’s family are shocked to hear the latest news about Georgia.

After dinner, Zion tries to explain to his family what happened. His mom and sister start gossiping about Georgia and how he should have dated another woman. They also want Zion to expose Ginny to her community. They tell Zion that Georgia is too self-involved to know what Ginny needs. Ginny overhears the whole conversation

In the meantime, Georgia visits Paul’s parents for Thanksgiving dinner and it goes pretty smoothly until Paul’s mom brings up Georgia’s past lovers. At the end of the dinner, Paul‘s parents try to talk to him about Georgia. They point out that she comes from a different background, moves around a lot, has two kids with different fathers and comes with a lot of baggage.

His dad tells him Georgia is a woman a man has fun with but not marry. His mother wonders why Georgia doesn’t have her kids for Thanksgiving. Paul asks them to stop berating Georgia and says he has thought about all the concerns they have mentioned. He is set on marrying her because he loves her.  Georgia overhears the conversation but acts as if nothing is wrong when they leave.

Once they get home, Georgia calls Zion and tries to pick a fight. Zion tells her she is only acting like this because she misses the kids. She asks him not to tell the kids she called. He asks her to be a bigger person and he says he will drop the kids off the next day.

Back at her father’s house, Ginny can’t stop thinking about what Jesse told her. She starts self-harming again. Ginny hears her dad talking on the phone and asks if it is her mom. Zion tells her that he will be taking them back the next day. Ginny gets angry and says she knows her mom will try to act as if nothing happened.

She tells Paul she doesn’t want to go and they are not fighting about Paul. She says she is not okay and starts having a panic attack. Paul tries to get her to calm down and talk to him. He promises her that he won’t get mad if she tells him what is wrong.

She confides in him about her self-harming and asks if she can live with him. Zion tells her that he will get her the help she needs. He wants to talk to Georgia about this but Ginny tells him she can’t trust Georgia. She blames him for not being there enough and failing her when she really needed him.

The next day, Ginny returns Marcus’s bike and apologizes to him. Ginny is happy to see the kids but the fri-yay is not a hit. Zion tries to tell Georgia that Ginny wants to live with him. Georgia denies that request, she feels betrayed by Ginny choosing her dad. Zion tries to tell Georgia about the self-harm but Ginny stops him and says she will move back to live with Georgia.

In a flashback, we see what happened the night Georgia discovered Ginny and Austin left. She realized Ginny learnt secrets about her past that she wanted to keep hidden.

As thing unravels in Georgia’s home, Jesse continues to investigate Georgia’s past and Ginny confides in Marcus that she doesn’t know what to do. She thinks her family is broken and Marcus says he understands her. Ginny asks him to stay the night and he agrees.

In another flashback, Georgia remembers when the kids were young and a man was threatening to kill her while trying to break into their apartment.

Ginny is certainly right and it’s clear that her dad is failing her. He should have picked up that she has a bigger issue with her mom and tried to protect her until he finds out more. Signing her up for therapy but still letting her live in the toxic environment created by her mom is incompetence. He needed to do more.

Marcus and Ginny are not in a healthy relationship either and they both need help. Their co-dependency on each other won’t end well.

I understand Maxine is angry but she needs to give Abby a break given she is going through a lot. She has sincerely apologized and she could use her friends with everything going on with her.

I don’t know what role Cynthia will play this season but it was sad seeing her that down. Hopefully the fortunes will improve for our protagonists moving forward.