For our ongoing series of articles depicting the best video games, our attention this time turns to the best visual novel games of all time. From thrilling mysteries to intriguing dramas, there’s a good choice to whet your appetite.

Before it became the horrific mystery anime fans know it today, Higurashi No Naku Koro Ni started off as a visual and sound novel. Like most visual novels, the gameplay is simple, you’ll click and read your way through the story as it unfolds before your eyes.

Higurashi’s earlier visual novels didn’t have the best artwork. All the characters had exaggerated bodies and facial compositions that made them look like they were Pillsbury Doughboy’s anime cousins. Fortunately, the visual novels have been remastered with better character artwork and background designs.

Fans of the anime will appreciate the new art style as it captures the intense facial expressions and chilling moments better than the original. The soundtrack in this novel is also jam-packed with enough spooks and thrills to keep anyone up at night.

When it was released, many gaming streamers and content creators frolicked to their computers to film themselves playing through its narrative. This allowed the game to reach a wider audience as these influencers’ sparked more fan interest in the game.

The game itself doesn’t feature any complex button presses or mechanics. It follows your traditional visual novel formula with its simplified “point and click” gameplay format. What makes Doki Doki Literature Club an intriguing visual novel to many is its characters and tonal shifts.

It’s a game that banks on its fourth-wall-breaking moment, chilling and lighthearted atmosphere, and well-written main cast. Going into this game with no knowledge is the best way to experience it.

The story is relatively the same as the anime. It centers around the delinquent turned father-figure Tomoya Okazaki and his relationship with the show’s main female cast and his male friend Sunohara.

The main takeaway of the visual novel is that the events that transpire in After Story flow better and some characters are given more time to shine. The slow pacing of After Story’s events allows fans to gain more attachment with the main cast, including those who were side-lined in the anime.

It explores Tomoya’s relationship with Nagisa’s parents better and makes them feel more rounded. You’ll see Tomoya and his friends undergo harsher struggles in their adult lives. Unlike anime, you also get the chance to steer the story in the direction you want it to go. This is thanks to the game’s inclusion of alternate routes.

Digimon Survive is a game that was built up with a lot of fanfare and excitement. However, when fans got their hands on the game, they were met with confusion and disgust. Many praised its dark visual novel storytelling while others felt it was a snooze fest.

However, it managed to please a majority of Digimon fans with its murder-mystery plot and insertion of tactical gameplay elements. While the story starts off slow, it gradually spirals into an intense and chilling thrill ride. This game explores dark themes revolving around murder and death. This clashes nicely with the colorful and childlike design of the Digimon.

The human characters in this game are fleshed-out and well-developed. You’ll find a character that you’ll adore immensely and some that you’re hoping a Digimon will take out in a heartbeat. Although it had a slightly controversial launch, Digimon Survive delivers a wonderfully dark and depressing narrative many long-term Digimon fans will appreciate and cherish. 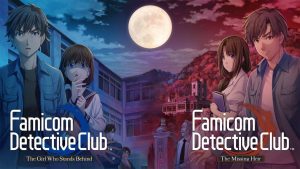 Famicom Detective Club was ahead of its time and paved the way for incredible games like Phoenix Wright, Professor Layton, and others. While those franchises improve upon the mechanics found in Famicom Detective Club, it’s important to highlight what these games did for the genre.

The Famicom Detective Club series has always intrigued western Nintendo fans since its female mascot, Ayumi Tachibana’s inclusion as a trophy in Super Smash Bros. Melee. It took about two to three decades for Nintendo to remake and release this title in the west. It’s an interesting piece of Nintendo history as visual novels aren’t associated with the brand as much as adventure and platform games are.

History aside, Famicom Detective Club is split into three separate games. Each game revolves around a different mystery that slowly unravels as you progress. The gameplay follows the format of traditional visual novels where you read the text box provided to attain testimonies and insight from nearby civilians. In typical detective fashion, you will use a magnifying glass to hover over specific areas to attain additional clues and evidence.

The puzzles in this game can feel repetitive, but the tension it builds over time is phenomenal. The remakes for The Missing Heir and The Girl Who Stands Behind contain better animation, sprite artwork, and soothing vocals, and OST. This is the ideal way to experience both games. The House in Fata Morgana

Fata Morgana takes place inside a mansion where an amnesiac spirit lives with a housemaid. This game will take these two across several time periods. In each period, they’ll learn what happened to the mansion’s list of residents while searching for a way to retrieve our spirit protagonist’s lost memories.

This visual novel’s gameplay follows suit with others. You simply need to follow along with the text presented on the screen and press a singular button to progress through it. The game’s visuals, storyline, and soundtrack are where it shines most. The character sprites are wonderfully designed. They mesh well with this world’s various environments.

The story itself is gravitating. The visuals that accompany its story beats are mesmerizing and impactful. You may shed a few tears along the way. There are over sixty soundtracks featured in this game. Many feel unique and wonderful to listen to. This is a fantastic visual novel to play if you’re looking for a deep and mesmerizing tale. 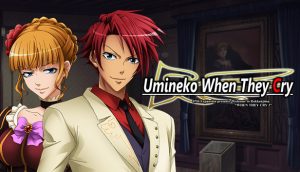 Umineko No Naku Koro Ni is another great work by Higurashi When They Cry creator Ryukishi07. The gameplay is similar to Higurashi in that you must read and follow along with the narrative being presented. However, fans of his work regard this as Ryukishi07’s greatest work for its astounding narrative and memorable characters.

Umineko No Naku Koro Ni tells a tale of murder, magic, and mystery involving the rich Ushiromiya family and the world of witches. After seeing his family members die before him, one of our protagonists Battler Ushiromiya challenges the evil Golden Witch Beatrice to a variety of mind-games that will leave you speculating and pondering.

Every character in this visual novel has a unique personality and motive. Each character serves a unique purpose in this tale, allowing them to leave a lasting impact on readers. The concepts and themes this visual novel tackles are highly intellectual and supernatural. There’s a more magical aspect at play here than in Higurashi No Naku Koro Ni, too.

VA-11 HALL-A: Cyberpunk Bartender Action is a thought-provoking visual novel with a cozy atmosphere. With its beautiful pixel graphics, intriguing dialogue, and memorable characters, there’s much to explore with this visual novel.

This game takes place in a futuristic dystopia. This area is home to many hackers and criminals. In this game, players follow the life of Jill, who is a bartender at a dive bar called Valhalla. Your task is to simply keep up with Jill’s daily routines as she greets and attends to the needs of her various clients that enter the bar.

This game offers a different storytelling approach compared to most visual novels. If you want to hear about a client’s past life, you can’t access this information by clicking through a line of dialogue. The only way to squeeze this information from them is by mixing their drinks in specific ways. Essentially, the way you tackle these individuals’ orders determines what information you receive from them.

This allows the visual novel to stand out from others and gives it its charm and strong replay value. If you’re looking for an intriguing visual novel that offers a new method of story progression, check out VA-11 HALL-A: Cyberpunk Bartender Action.

Phoenix Wright: Ace Attorney is an astounding visual novel adventure game. This franchise features visually stunning character animations, intense trials and interrogation scenes, and a slew of puzzles for you to solve. While it may not reflect the livelihood of real lawyers, its thought-provoking atmosphere is worth experiencing.

This franchise has spanned quite a few protagonists. Each character came with a unique personality and strives for justice. However, the protagonist many associates with the franchise is Phoenix Wright. Phoenix Wright doesn’t start off as a grand attorney, though. You must help him reach his profound status by helping him solve and investigate numerous crimes and cases.

The witnesses, culprits, and attorneys you’ll come across the range in professionalism. Some will appear calm and well-organized while others will have this vicious persona about them. You’ll get a kick out of the over-the-top performances displayed by the game’s various criminals. It feels satisfying to see these individuals break down, as it allows players to soak in the humorous energy emulating from them. The Danganronpa franchise has gained a massive following for itself. This game contains many battle royale tropes and mixes it with the brutal nature of the Saw franchise. With its large ensemble cast, thought-provoking story elements, and superb visuals, this franchise offers some of the best murder mystery shenanigans.

Each game follows a similar premise. The plot revolves around a group of high school students who must murder each other based on a robotic teddy bear named Monokuma’s demands. The gameplay mixes elements from multiple genres, like adventure and detective-oriented games. Dating simulation and visual novel aspects are also at play here.

A total of six chapters are divided into three sections: Daily Life, Deadly Life, and Class Trial. The former involves you exploring the school and conversing with your classmates. You must collect clues surrounding a murder case in Deadly Life in order to present them at the Class Trial. The Class Trial is where you’ll determine the culprit and serves as the game’s prime section.

The Class Trial is where you’ll discuss your stance regarding murder cases and point out your fellow classmate’s contradictions in their statements. This section will have you compete in numerous minigames to deal damage to your adversary. These minigames vary in design. Some are rhythmic, while others are straightforward.

This is a game franchise that has spanned many successful follow-ups and spin-offs. If you’re looking for an incredible murder-mystery visual novel, give this franchise a try.

So, there we have it, our pick for the best visual novel games of all time!