For our ongoing series of articles depicting the best video games, our attention this time turns to games that are free to play. From iconic battle royales to adventurous role-playing games, there are a lot of games worth spending time on.

Fortnite has set the world by storm with its numerous collaborations, addictive and fun gameplay, and intriguing storyline. It also offers a wonderful Battle Pass system with enough interesting material to satisfy any casual or hardcore gamer.

The collaborations it has attained over the year are surprising. Some of these include characters from the DC universe, like Superman, crossing over with beloved icons like Iron Man from Marvel.

Fortnite’s battle royale formula allows its world to give off feelings of vastness and creativity. It’s highly immersive, especially when you’re traversing the game’s world with friends. Fortnite also offers other forms of play thanks to its creative hub.

These forms of play consist of things like role-playing or racing in cars with friends. This allows players to cool down after intense encounters with others in its usual battle royale mode.

If you’re looking for a free-to-play title that offers easy-to-attain awards, a marvellous open world, alongside addictive and compelling gameplay, play a round of Fortnite.

Team Fortress 2 is a game that sought popularity among PC gamers, who love it for its wacky style, characters, and addictive gameplay. This game is an online first-person shooter title with an incredible emphasis on teamwork and cooperative play.

The game’s characters also have different traits and imperfections, allowing for newer and fresher experiences each time you boot up the title. It also offers a wonderful training mode where you can practice before you hop into a battle with friends or others online. This mode offers detailed and concise instructions and explanations to help you improve.

The game also features classic modes like Capture the Flag and King of the Hill. Most importantly, this game doesn’t include any pay-to-win items. This means you can play on equal footing, and not need to worry about another player having better perks.

Halo Infinite is the first game in the franchise to enable its multiplayer as a free-to-play option for fans. Although fans will miss out on Master Chief’s journey in this new world, they’ll at least get the chance to re-live their memories playing the franchise’s beloved multiplayer modes.

As it stands, Halo Infinite’s free-to-play multiplayer mode doesn’t feature any pay-to-win aspects. This means players can wipe away their fears about losing to people who utilize financially bought weapons or abilities. The multiplayer game does feature a well-designer character customizer. You can also earn more cosmetics by playing the game or picking up its Battle Pass.

Graphically, the game runs and looks gorgeous. The team did a fine job at making the character designs pop this time around. Unfortunately, its game modes do lack in quantity in comparison to previous entries. However, the modes it offers, like Big Team Battle and Arena should provide you with enough things to do.

While it doesn’t offer too much as of now, the game’s developers promise to add more engaging content via numerous updates. If you’re looking to get back into Halo, Halo Infinite’s free-to-play multiplayer is your best place to start.

Roblox feels like Minecraft’s long-lost brother (to some degree). It’s another franchise whose target audience is preferably children, but can be enjoyed by anyone willing to give it a chance. It doesn’t feature a story or main character of any kind.

Yet it does feature a wide ecosystem of player-generated content that’s both creative and fun. They range from common role-play to competitive activities like racing friends or challenging them to one vs one combat. This game is a pool of endless possibilities that continues to grow by the number.

The game also features an enticing character customization system. However, there are some consumable and cosmetic items that are locked behind the game’s microtransactions. But these generally range from minuscule things that only seek to enhance your overall experience with the game.

If you’re looking for a game that’s fun for everyone, check out Roblox.

Fall Guys is another title that saw a massive boom in popularity like Among Us. It has finally adopted the free-to-play model to reel in new and old players alike. So far, it has found its success by doing so, meaning that it will remain a free-to-play title from here on out.

Fall Guys offers a wide range of activities from mini-games. These mini-games range from players competing in sports-like activities to ones where they need to memorize pictures. However, the main attention-grabber is its approach to obstacle course challenges.

Like the TV show Wipeout, players will need to traverse through an obstacle and reach its end goal within a specific duration of time. However, the characters you control are light as a feather. This gives the game some difficulty as the courses contain many traps and gimmicks that’ll send your character off platforms.

It’s an adorably-designed game that will leave you laughing and raging.

Genshin Impact received a lot of flack and criticism during its debut. This was because its first trailer was released around the same time as The Legend of Zelda: Breath of the Wild. Zelda fans didn’t like how it was marketing itself as a grand adventure with unique ideas since most of those concepts already occurred in Link’s latest adventure.

Over time, the controversy surrounding the game dwindled and now it’s become a grand title in the eyes of those who didn’t approve of it. As you can tell, Genshin Impact is a free-to-play adventure game where you must complete side quests, explore a magical world, and save your sibling from their kidnapper.

The content in the game ranges from exploring mystical dungeons to cooking meals and potions to attain strength and health. The game also features a decent Gacha system that allows you to pull powerful characters that you can play as.

Multiversus is a crossover platform fighting game that aims to fill the void that Super Smash Bros. Ultimate left behind. This game offers incredible characters from Warner Bros. hit franchises from Super Man to Fin and Jake from Adventure Time. It also tackles things differently enough to help it stand on its own.

The game’s focus is on two vs two combat. Like Super Smash Bros., your goal is to deal enough damage to your opponent and send them flying off the stage. The game also features different modes like one vs one and free for all matchups, and chances for players to fight bots alone or with friends. The stages in the title are full of life and resemble hit scenarios or landscapes from specific shows.

The game’s progression system follows suit with Fortnite regarding Battle Passes and tiers. As you progress, you’ll be able to receive currency you can use to purchase more characters, costumes, ring-out effects, and other goodies. You’ll also earn points that go toward leveling up your characters and battle pass.

If they play their cards right, Multiversus can become a worldwide hit like Super Smash Bros.

Rocket League is an incredible and unique sports game. This game offers a wonderful battle pass system that allows you to earn customizable trinkets for your vehicles. The game has also collaborated with big companies like Nintendo and Netflix. It also has a strong competitive scene for those aiming to be the best.

In Rocket League, you’ll gain access to numerous vehicles. You can customize these vehicles’ engines, spark effects, and hats. Your mission is to drive and knock a large ball into your opponent’s goal. Think soccer, but instead of using your feet to kick the ball, you’re using your car.

The game also offers different modes that resemble sports like hockey and basketball. While the game leans toward doubles (two vs two) as the competitive standard, gamers can battle others in matchups that range from one vs one to four vs four.

It’s a game that’ll keep you coming back for more and one that’s definitely worth a long and relaxing gaming session.

VR Chat is one of the most hilariously comfortable gaming experiences you’ll ever receive. There’s no purpose, story, or complex gameplay built into it. It’s a title where you can explore multiple different worlds, many of which are created and monitored by gamers just like yourself.

VR Chat places you in control of your personal avatar. The point of the game is to explore different user-created environments and do whatever you want. You can chat and make friends. You can act like the game’s biggest villain. The choice is entirely up to you.

The gameplay itself is simple unless you own a VR headset and have a VR controller nearby. If you do, you’ll be able to move your character’s arms and witness the game’s worlds in a more immersive light. The game is always receiving updates that add things for players to do. 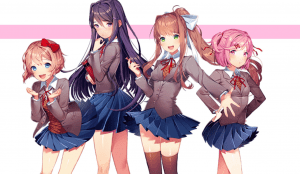 Doki Doki Literature Club is an eye-catching visual novel game wrapped in deceit. It has a storyline that’s simple and wholesome on the surface. However, it spirals into something more terrifying and horrifying as you continue playing the game.

It’s a game full of personality and appeal. It made a huge splash during its release, thanks to YouTube content creators posting videos and hosting live streams of themselves playing the game. The main cast each offer something fresh and complex to the narrative.

The gameplay itself follows the standard for visual novels. You’ll be met with many dialogues and prompts that you’ll have to read and click. Some of the game’s dialogue will leave you pondering your next moves and will challenge your morals. The game also breaks the fourth wall in ways that are both creepy and hilarious.

If you’ve never played a visual novel game before, Doki Doki Literature Club is a great introduction. However, if you’re sensitive to dark topics like depression and loss, you may want to stay away from this game.

So, there we have it, our picks for the best free-to-play video games of all time.