For our ongoing series of articles depicting the best anime, our attention this time turns to vampires. From shocking dramas to action and gore-oriented series, there’s a good choice to whet your appetite. 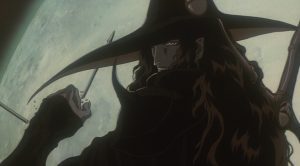 Although humanity and vampires may not see eye to eye realistically, humans will favor anyone who can triumph over the mythical creature. Vampire Hunter D follows a protagonist with much respect and honor that he’s ideally the best hybrid warrior of his universe.

Vampire Hunter D follows D, a half-human and half-vampire hybrid warrior that accepts a mission to bring back a father’s daughter from a monstrous vampire to claim a reward. However, he learns that other bounty hunters are after the same prize, making his task more difficult than expected.

Although there are multiple characters in the film, Vampire Hunter D gives all the characters time in the spotlight. Everyone feels distinct from their weapons to their personalities. The animation and art style are beautiful and gloomy, and the ost intensifies the chilling and short dramatic moments wonderfully.

If you’re a fan of romantic vampire tales, but wish they contained more depth, action, thrills, and more, Vampire Hunter D is what you’ve been searching for.

Whenever a high-ranked organization is involved in a horror show or film, they tend to house a powerful and deadly creature. With Hellsing Ultimate, not only do they harbor a formidable vampire warrior, but he’s an excellent gun-wielding specialist with many abilities.

The story follows Alucard, a vampire that works with the well-acclaimed Hellsing organization. He later recruits a police officer named Seras Victoria, and the two must take down anyone that poses a threat to Hellsing.

The action scenes are well-executed, and the background music adds to the thrills felt in most fights. Essentially, Hellsing Ultimate, though lacking an intricate narrative, promises enough carnage, quirkiness, and exhilarating emotions that it’d be hard to pass up a quick watch.

Imagine living a life where you have no memory of your life from a year ago? Saya Otanashi, the main protagonist of Blood +, tackles this issue but discovers she’s was a hybrid warrior with vampire strength and abilities.

She finds out her abilities after a strange man helps her fend off against a blood-craving monster and reawakens her powers. Then Saya learns about Red Shield and decides to aid the agency by taking Red Shield’s enemies down.

While not the most complex story, Blood +’s tale is well-written as each monster; she fights impacts, Saya. The setting is often depressing and dark, fitting with the tone and mood of the show’s premise. The character art style and animation hold up and keep visual enthusiasts engaged.

Mixing school life with mythical vampires leads to series like Vampire Knight. Vampire Knight features the typical soap opera storyline. Despite this, the anime hits home with its many dramatic dialog, emotional struggles, and tragic pasts.

The story follows Yuuki Cross, a member of her academy’s committee that features two different classes. One of these classes consists of vampires. She then meets a pure vampire named Kaname Kuran, who saved her years ago from a vampire attack.

Furthermore, he despises vampires: and some vampires’ romantic relationships had with humans. The main focus then turns to Yuki’s troubling feelings for Kaname and Kaname’s hidden secret that’ll cause controversy for the whole academy.

As the story progresses, the dark tension seems to rise alongside it. The anime also has an intriguing mystery that’ll leave viewers engaged and wondering what will happen near the anime’s end.

While many may prefer the source material’s art style, Vampire Knight’s art style and animation aren’t too bad on the eyes. The soundtrack fits the romantic and dark tension felt in the show and never overpowered the dialog between the characters.

Dance In The Vampire Bund

If vampires acknowledged their existence in the world today, humans would react in awe and bewilderment. Combine that idea with a romantic storyline, and you’ll end up with Dance In The Vampire Bund.

The story follows Mina, the vampire queen who reveals vampires’ existence to the world, aims for peace, and wants a section of Japan where her vampire citizens can inhabit. While controversy does befall Mina, she meets a man named Akira, who wants nothing to do with vampires.

Despite his quarrels with the species, Akira oddly wishes to do anything for Mina. Akira later learns a secret to why he’s feeling this way, and the story follows the deeper connection between him and Mina.

As for scenes, they’re highly cinematic and engaging. The music incorporated in these scenes also hit home, ridding them of feeling bland or empty. If you’re looking for an intriguing plot with some cinematic scenes, Vampire In The Bund is the anime for you.

Seraph of the End

Seraph of the End doesn’t contain the most original storyline compared to most anime, but it’s filled with themes like revenge, sacrifice, and friendship.

The story takes place in a post-apocalyptic setting where vampires protect humans from a virus while taking their blood as payment. It also follows Yuuichirou Hyakuya, an orphan boy who joins a military unit to take down these vampires. While out for vengeance for a fallen family member, Yuuichirou realizes something he’d least expect.

While the story is simple in form, viewers will learn about the secrets and mysteries of this world through Yuuichirou’s eyes. The fights he endures and gets wrapped up in are also spectacles to watch. The biggest takeaway lies in its art style, animation, and soundtrack.

The character designs are vivid and help viewers distinguish each character from one another. The animation during the fight scenes feels cinematic and fascinating to the eyes. The soundtracks add more emotion to various character scenes that’d feel less impactful without them.

While most narratives depict vampires as evil and menacing, some choose to flip that concept around. Shiki is a well-written anime that’ll make viewers feel bittersweet with the scenes and actions displayed by all the characters.

The story is very captivating as there are many twists and mysteries that viewers will enjoy. While the character design may turn people away from the anime, it helps diversify the characters. The dreary and dark colors in the series also help to highlight the supernatural and mystical tension of the anime.

If you’re looking for a vampire series that’ll leave you feeling speechless, Shiki’s worth watching.

Envision yourself surviving an animal’s attack and gaining the abilities of said monster that attacked you. While it may sound fascinating to many people, others will fear how the public views them. Bakemonogatari provides various mysteries revolving around a character with the mentioned issues above.

The story follows Koyomi Araragi, who gains supernatural healing and vision powers after encountering a vampire. While trying to live an average lifestyle with his new powers, he meets a girl with unique abilities and decides to help her out. After assisting her, Araragi discovers his new purpose, to help those suffering from supernatural illnesses.

The story is intriguing as it depends on its characters’ back and forth dialog to progress the narrative. The characters in question are Araragi and the first girl he meets, whose personalities and morals clash well.

Furthermore, some side character arcs have overwhelming fanservice and don’t feel integral to the plot. While this may be a bummer to some, fear not, as most of the people he helps develop Araragi’s character.

The anime’s animation is breathtaking and is even more beautiful to engage with on a larger television screen. If viewers are looking for an anime with unique characters and stylized animation, watch Bakemonogatari.

JoJo’s Bizarre Adventure may have started as a niche franchise, but it later became an iconic hit for a new generation of fans. From its hysterical memes, interesting character dynamics, and intense action, many still love sharing their love for Jojo.

While the other story arcs that follow don’t focus on vampires like JoJo’s Bizarre Adventure: Phantom Blood, it’s what kickstarted the rivalry between the Joestars and Brando lineage.

The story follows Jonathan Joestar, whose father adopts Dio Brando to repay Dio’s father for saving them from tragedy. While it all sounds dandy, Dio plans to outperform Jonathan to gain praise from his father, thereby stealing their fortune under the Joestar family’s nose. The story follows Jonathan’s attempts to foil Dio’s plans while also becoming a stronger person in the process.

JoJo’s Bizarre Adventure contains immense gore and scenery that may be too sensitive for the warmest of hearts. The characters also feel static and undergo minimal development as a result.

Nonetheless, it’s those qualities that emphasize the beauty behind JoJo’s Bizarre Adventure: Phantom Blood and never drive the narrative down a sour path. The story arcs that follow never feel out of place, and only add to the overarching adventurous feeling behind the anime’s title.

JoJo’s Bizarre Adventure is a popular anime amongst fans because of its characters, action, and overarching plot. It’s a series that will remain in fans’ minds for years.

To most horror fans, vampires are known for being fearsome creatures that aim to cause humans harm. However, Vampire Princess Miyu is a tale that depicts a vampire-fighting for humanity as opposed to murdering them.

The story follows a vampire girl named Miyu, whose life goal is to send every demonic creature back to their original home called the Dark. Meanwhile, a spiritualist believes she’s responsible for hurting humans and seeks to study Miyu and end her.

For the most part, the storyline lacks depth, and most of the characters introduced receive minimal development. However, the tension within each episode never misses the mark, and the mysteries presented add icing to the cake.

The dated animation may be unappealing to some, but the art style blends well with the dark and gritty nature of the anime. Despite having fights that end quickly, Vampire Princess Miyu chooses to up its animation quality for thrilling and chilling scenes.

It’s a vampire anime best watched for its animation techniques, mystery, and tension.

So, there we have it, our picks for the best anime through the years about vampires!