For our ongoing series of articles depicting the best anime, our attention this time turns to sci-fi. From mesmerizing outer space adventures to tactical space battles, there’s a good choice to whet your appetite.

Neon Genesis Evangelion is a well-written and complex series featuring large robots fighting an alien threat. This series tackles themes concerning obligation, self-affirmation, and tenacity. The show does a wonderful job of developing its cast and showcasing them struggling to survive in this post-apocalyptic setting.

Fans will adore seeing everyone’s differing personalities clash, as it makes their outcome feel more authentic than it appears. That’s one thing about Neon Genesis Evangelion that has fans calling it a deconstruction of the mecha genre. Instead of highlighting the show’s mechanical robots fights, it chooses to hone in on its character’s mentality.

Outlaw Star focuses on a space traveler named Gene, who wants to pilot a high-class vehicle that will help him visit multiple planets and soar through the galaxy. Despite having wild dreams, Gene finds himself completing mundane tasks with his friend James.

James and Gene’s lives take a dramatic turn when they receive an opportunity to travel through outer space via the Outlaw Star spacecraft. Alongside a treasure hunter named Rachel, these two must protect a mysterious girl named Melfina. With this task, Gene will realize that outer space travel has its own dangers and issues, despite fulfilling a lifelong dream.

Outlaw Star is a wonderful outer-space comedy and adventure anime. While Gene doesn’t start off as a likable protagonist, the series spends some time developing him into a more favorable one. This episode features beautiful action scenes that will keep you on the edge of your seat. From the distinct and fun worlds Gene explores to the goofy antics he gets involved in, Outlaw Star is a bundle of fun that never gets old.

Cowboy Bebop is a jazzy sci-fi classic. Although its storyline feels slightly episodic at times, the series crafts an astounding tale full of action and genuinely favorable reveals. The story does a fantastic job at revealing our characters’ past lives gradually, making each episode feel integral to watch.

Despite being an older series, the fights in Cowboy Bebop aren’t a laughing matter. As you see our character’s combat foes, you’ll notice the excruciating detail that went into their stances, movements, and attack patterns. While the series features some gun fights, fans will adore its physical approaches toward combat.

Animation aside, Cowboy Bebop delivers in its soundtrack. The songs that accompany its relaxing and action-centric scenes will elevate fans’ immersion in the world. The voice acting in this show is phenomenal and will have fans wanting to experience the show in multiple languages.

If you’re looking for a fun sci-fi anime with intriguing characters and excellent visuals, check out Cowboy Bebop.

Serial Experiments Lain is a sci-fi show that you’d want to experience more than once rake in all the alluring and important details its narrative holds. This show won’t appeal to everyone as it aims to please audiences who adore theory-crafting and speculation.

On that note, Serial Experiments Lain is a slow-burner. It doesn’t rush into its intense scenes swiftly and requires its audience to have a little patience. If you can sit through its slow storytelling approach, you’re in for a satisfying treat full of mind-numbing and unimaginable plot twists and turns.

Our tale revolves around a girl named Lain, who gets a strange email from a dead classmate. Out of curiosity, she opens the email and ends up in a virtual world called The Wired. In this world, Lain comes across numerous mysteries and meets bizarre men called The Men In Black.

These beings know more about Lain than she knows about herself. Therefore, the anime revolves around Lain’s adventure through this bizarre virtual world where mysteries and spooky shenanigans are the norm. This is a series that’ll leave you pondering after every episode, meaning you’ll want to pay attention to every detail it throws at you.

Don’t let this anime’s Disney-looking aesthetic fool you. Underneath its cartoon-like exterior is a show wreaking in mature themes and storytelling. Like the previous entry, Kaiba is a show with a complex narrative, and one viewer will need to watch it more than once to make sense of it.

With its phenomenal world-building, distinct art style, and amazing OST, Kaiba promises to deliver fans an experience that will leave a lasting impression. Our tale follows our protagonist, Kaiba, who awakens with a gaping hole in his stomach and no memory of his past life.

Eventually, Kaiba discovers a locket and a photo of a mysterious girl. He decides to traverse the solar system to find her and get some answers about his past. This is an anime seeping into themes of self-discovery and exploration. Kaiba’s journey will lead him toward numerous locations, each housing misery, and suspense around every corner.

If you’re a fan of anime with unique art styles and complex plots, then Kaiba is the series for you.

The Legend of the Galactic Heroes

The Legend of the Galactic Heroes is regarded as the best sci-fi anime of all time. While its pacing is slow and dialogue-heavy, this show features one of the grandest narratives, characters, and worlds in all of anime. This space opera follows two masterminds named Reinhard and Yang.

Each runs a specific superpower that’s at war with the other. In this war, both factions want their side to come out on top. Not only will these formidable forces be required to watch over their specific fleets, but they’ll need to contend with personal issues that’ll challenge them further.

This anime offers many well-rounded characters who serve an integral role in the story. These characters engage in various physical and mental disputes concerning their rise to status. It delves into mature topics concerning politics, rebellion, and morality. If you’re looking for an anime with a deep narrative, complex characters, and awesome space fights, check out The Legend of the Galactic Heroes.

The 1995 Ghost In The Shell film was an instant hit for many anime fans. With its glorious world and awesome protagonist Major Kusanagi, it delivered the excitement and nuance fans were looking for in a sci-fi-themed show. That said, Stand Alone Complex is as amazing as the 1995 feature film.

This anime tackled its story differently from other anime. There are episodes tailored made for its Stand Alone arc and some that coincide with its Complex half. The former revolves around Section 9’s work as they investigate different cases while the latter focuses on the series’s plot involving the Laughing Man.

Each part offers a well-written story to follow and has stand-out elements. For example, Stand Alone allows viewers to get an idea of how the Section 9 members work as a unit and delve into their lives from a societal perspective. The script for Complex is equally as good but can be somewhat confusing for some. Either way, SAC is a great sci-fi anime that deserves its praise. 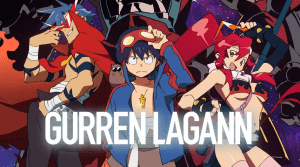 Tengen Toppa Gurren Lagann is one of the more stylish sci-fi anime with adrenalline-pumping robot fights and likable characters. While it boasts clever humor and stellar action, its characters serve as one of its finest elements.

Our tale centers around two boys named Kamina and Simon. While exploring their underground home, they stumble upon a robot called Lagann. After fixing him up, they set sail for the surface world and are amazed by what they discover. Despite their endless dreams, the surface world isn’t all that pleasant.

It’s being ruled by an evil ruler named Lord Genome who sends his minions out to terrorize the people who inhabit the land. With the help of a spunky girl named Yoko, Kamina and Simon aim to defeat Lord Genome and bring peace to the surface world’s people.

This anime contains highly stylized artwork and epic robot battles. The soundtrack elevates the tension of each bout, making every fight feel like a spectacle on screen. While this show likes to drench its viewers with funny and heartwarming moments, it’s not afraid to tamper with fans’ hearts. Expect many dramatic and emotional segments in this show that’ll make you flustered or upset.

In Psycho-Pass, technology determines a person’s likelihood to commit crimes and assesses his or her ideal career. With its gloomy atmosphere, futuristic setting, and adoring characters, Psycho-Pass delivers an experience any fan of crime would love.

The story takes place in futuristic Japan, where the Sibyl System determines a person’s threat level by analyzing their mindset. Our protagonist Akane discovers the system’s fallacies and wants to inform the world of her discovery. Akane’s journey will take her on multiple thrill rides with exhilarating and terrifying outcomes.

This anime features a nice blend of gore and action and tackles psychological themes. This anime offers a wonderful depiction of the human psyche and contains numerous thought-provoking mysteries and crimes for Akane to solve. With its fun gun fights and multiple cases, this crime anime’s sure to please you.

Ergo Proxy takes place in the futuristic, isolated city of Romdo. The remaining humans take refuge here and can’t go past its walls. Aiming to counter this problem, Romdo’s scientists create robots (AutoReivs) that assist humanity with their daily needs. However, like other robot-themed works, this situation doesn’t bode well for these humanoids.

The AutoReivs become self-aware after conducting a virus. Iggy and Re-1 Mayer, the granddaughter of Romdo’s ruler, are assigned to investigate the anomaly. As Re-1 uncovers the hidden conspiracy surrounding her world’s status, her simple investigation takes a turn for the worse.

Ergo Proxy is a well-written anime with realistic characters, a well-developed storyline, and an enthralling technological world. This anime gives its world just enough characteristics to make it feel like a character itself. This anime’s setting plays a vital role in its mysteries and plot twists.

Furthermore, it paints a darker picture of what a future run by machines would look like and tackles that concept with full integrity. This is one of those shows like Serial Experiments Lain where you’ll want to rewatch specific episodes to attain answers for the story’s questionable aspects. If you enjoy series that force you to ponder and speculate, check out Ergo Proxy.

So, there we have it, our picks for the best sci-fi anime through the years!