2022 saw a lot of growth for the Thai Bl industry. Fans got to enjoy many shows that kept them entertained and at the edge of their seats throughout the year. Whether it was an intense love story between a mafia and his bodyguard or two cuties who fell madly in love with each other, the stories were compelling. Here is our list (in no particular order!) for the best Thai BLs of 2022.

Love in The Air

This show was a welcomed surprise and shot its way to the top because of the amazing chemistry between the characters. The show follows two young couples namely PhayuRain and PrapaiSky as they fall in love. There is nothing cuter than young love and this show is proof of it.

You can read our extensive full-season review and episode recaps HERE!

What is not to love in this amazing work? We have hot talented men, a great storyline, action and spicy scenes. At the core of it, Kinnporsche is just a story about a hard-hearted mafia heir falling in love with his bodyguard and doing his best to protect the business and the family. What elevated this show is the cinematography and the cast’s attention to detail.

You can read our favourite moments from the show HERE!

Zee and Nunew showcased their boundless chemistry by playing the roles of Lian and Kuea respectively. The series follows Kuea who decides to call off his planned engagement with Lian. In an effort to win back Kuea, Lian asks him to move in with him. They start developing deeper feelings for one another as they spend more time together. The cinematography, the visuals and even Nunew’s amazing vocals really brought this whole project together.

The show follows the students of a leading all-boys school, Suppalo that is believed to be cursed. Here we meet Akk and Ayan who are on opposing sides and thus begins their hate relationship that slowly blossoms into love. The storyline is different from what we have seen in most Thai BLs and First and Khao outdid themselves with their performances in this series.

Fans of Until We Meet Again have been patiently waiting for this series to drop for what felt like an eternity. The show finally premiered this year and it has quickly become one of the best BLs of the year. The wise men were right, good things take time!  The show focuses on the love story between Team and Win who meet and fall in love through the university Swim Club.

You can read our extensive full-season review and episode recaps HERE!

A drunken one-night stand between Vee and Mark led to them developing feelings for one another. There are, however, a few complications that they need to handle before they can officially become a couple. Yin and War have great chemistry and it is easy to root for their characters in this show even though they were a little bit toxic.

Yai’s plan to get revenge on his long-time nemesis Mangkorn takes a turn and they end up sharing a steamy night together. The rest, as they say, is history but something threatens the prosperity of their relationship. This is perhaps the best MosBank show yet and fans can’t wait to see them in new projects. The only problem with the show was that it was too short making the ending feel rushed. 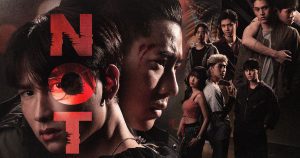 Not Me is arguably one of the best OffGun works. The series follows the lives of two twins who were separated after their parent’s divorce. Black remained in Thailand and joined an activist gang while White went abroad with their dad.

Black life is threatened and he ends up in a coma. To get the truth about his brother’s accident, White pretends to be him and infiltrates the gang. He ends up falling in love with Sean, one of the gang members.

I understand that many felt disappointed by the first few episodes of this show but it does get better as it moves along. The show follows Kamol, a mafia leader who falls in love with Kim. Kamol sees in Kim, a  partner who can keep up with his special needs in the bedroom and decides to win his heart. This show gave us all the feels and even the hard-hearted ones among us couldn’t help but shed a few tears. The series follows the story of Cake and Seeiw who have been friends for a long time. Seeiw is an introvert while Cake is outgoing. As they grow, things between them start to change and they start developing deeper feelings for each other. Santa and Cooheart did an amazing job portraying these characters.

180 Degrees Longitude Passes Through Us

Any mother will be shocked to learn that their young son has fallen in love with her close friend. This show portrayed the relationship between Wang and Inthawut who have a big age gap. Their relationship threatens to interfere with the tight relationship Wang has with his mother.

If you could save the person you love, would you travel through time over and over again? That was the case for Tin, a 3rd-year emergency medicine resident. In this series, Tin travels through a time loop to save Tol. In order to stop the continuous time loop, Tin needs to alter Tol’s fate and save him.

And there we have it, our list of the 11 best Thailand BL dramas that were released in 2022!