8 Best K-drama Kisses Of All Time

Kisses are getting bolder and bolder in K-dramas, but that does not mean that older shows released over the past decade didn’t show some intense make-out sessions that fans loved. Older Korean shows hold a special place in the hearts of fans and there have been some fan favourite kisses have been imprinted into the minds of fans.

If you are a fan who wants to take a look back at the good old kisses from K-dramas, here are our picks for the best kissing scenes from K-dramas over the last half-decade.

If there is one kissing scene from a K-drama that had fans in splits it is seeing CEO Lee Young-joon finally giving up on all his restraints and not holding back when he learned that his girlfriend, Kim Mi-so, was going to stay the night with him. The entire make-out scene from Episode 13 has to this day been called one of the most legendary kissing scenes from a K-drama.

The intense make-out scene soon turns into a lovemaking session which turns the heat up for everyone watching. The chemistry between Min-young and Seo-joon was so palpable that now, years after the release of the show, fans still want to see the two actors dating in real life.

Yes, this list has another Park Min-young kissing scene namely because she is quite good at what she does. Her Private Life is the 2019 office romance drama starring Park Min-young and Kim Jae-wook in the lead roles. While the entire drama has a lot of beautiful kissing scenes, Ryan (Jae-wook) and Deok-mi’s (Min-young) first kiss from Episode 9 gave viewers butterflies when they watched it.

The intensity of the two characters really being infatuated with each other is heightened by Deok-mi’s emotional turmoil of wanting to date Ryan and him finally giving in to her. As they start a full-blown relationship following the kiss, this is a pivotal and unforgettable moment in the drama. 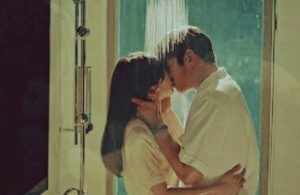 Ji Chang-wook is known for his kissing scenes and this will not be the only mention from the actor on this list! The 2019 drama, Melting Me Softly, starring Won Jin-ah and Ji Chang-wook had one kissing scene from Episode 10 that can be called one of the most romantic kisses from K-dramas.

The kiss was extremely passionate with Dong-chan (Chang-wook) and Mi-ran (Jin-ah) kissing each other right by the door across to inside the shower, all the whole passionately making out.

It’s Okay To Not Be Okay

While there is nothing like a deer interrupting your make-out scenes, the ‘1, 2, 3’ kiss from the 2020 K-drama It’s Okay To Not Be Okay had fans swooning. When Gang-tae (Kim Soo-hyun) tries to calm Mun-young (Seo Yea-ji), he asks her to take deep breaths and count to three.

The suddenness with which Gang-tae grabs Mun-young’s face and kisses her surely gave butterflies to all fans watching episode 11 of the show. While the show deals with intense topics, the romance between Gang-tae and Moon-young stands out.

Another Ji Chang-wook kiss comes from the 2017 law drama, Suspicious Partner. In Episode 16, Ji-wook (Chang-wook) finally lets himself give in to Bong-hee’s (Nam Ji-hyun) feelings for him.

The couple decide to go back to their respective rooms after one peck but their passion brings them right back to each other as Ji-wook grabs Bong-hee by her face and showers her with hungry kisses. The scene starts mellow but soon gets intense due to the hunger with which both characters are making out for the first time.

2021’s Nevertheless is one K-drama that had fans rooting for the hot bad boy who was a walking red flag. Song Kang and Han So-hee’s chemistry was off the charts, as they played Jae-eon and Na-bi respectively.

The show was full of passionate kisses but one scene that started the romantic journey for fans of the show was when Na-bi had a dream that Jae-eon was at her door during Episode 2. The kiss was so intense and borderline NSFW, which proves that K-dramas have come a long way over the years!

To many viewers who saw this 2017 drama, it was hard to believe that a shy and introverted CEO Eun Hwan-ki (Yeon Woo-jin) would be someone who’d initiate a kiss with his jolly and extroverted employee, Chae Ro-woon (Park Hye-soo).

The scene is intense, as Ro-woon is trying to get Hwan-ki to face a crowd which is something he gets easily anxious about. The turning on of the shower by accident sets the tone for the kiss that gives fans butterflies because it was Hwan-ki who initiated it.

Coming from one of the more recent shows on this list, the 2022 K-drama, Business Proposal shows an office romance between a CEO and his employee. The show had all elements of a typical K-drama and it stuck well with fans because of the chaotic energy between Kang Tae-moo (Ahn Hyo-seop) and Shin Ha-ri (Kim Se-jeong).

The kiss scene from episode 11 hits all the right spots for K-drama fans because it was not basic at all and was extremely sensual, showing how well the two actors worked together. We reckon that Samantha and Rachel probably had a lot of fun too!

So there we have it, our picks for the 8 best K-drama Kisses of all time!