From the extended 16+ episode long stories to unforgettable characters, there really is nothing quite like a good Korean drama.

Among the good, the bad and the ugly are some Korean dramas that stand the test of time and can be regarded as some of the best ever created. Here, we’ll be showcasing and celebrating our favourite historical dramas!

Of course, do feel free to comment below if we’ve missed any noteworthy entries and we’ll be sure to review it and see if it makes the list!

So without further ado, TheReviewGeek team present our picks (in no particular order!) for the best historical Korean dramas of all time.

Mr Sunshine is an epic period piece that combines impressive visuals with a really well written story. Coupled with some brilliant casting, this is one Korean drama not to be missed.

Set during the Joseon period in 1871, Mr Sunshine begins with a brief glimpse of the past as a Korean boy boards an American warship and grows up in the US as an American.

When he returns to his hometown again, it’s as an American soldier causing plenty of inner turmoil and conflict. To spoil much more would be a disservice to this drama.

The story is brilliantly paced, even across the extended 24 episode run, and the show backs up its solid writing with some excellent production design and set pieces.

The Crowned Clown is a dramatic, politically charged series awash with tension, twists and turns. With a satisfying conclusion and impressive cinematography throughout, this Korean drama delivers on all levels.

Set in Joseon, the Royal family are in a state of disorder following a number of uprisings among the unhappy populous. A power struggle for the throne soon ensues, with the maniacal Lee Hun ruling with an iron fist. The Queen Dowager, along with close advisor Sin Chi-Soo, plot to overthrow the King.

When an entertainer arrives in town bearing the same face as the King, Lee Hun switches places with the pretender. Unprepared and in over his head, with the help of both Eunuch Jo and the Royal Secretary Ha Sun takes the throne.

Mr Queen is a hilarious, well-written body swap comedy, set deep in the heart of the Joseon Era.

Despite a polarizing ending and a couple of misfires along the way, this historical drama is undoubtedly a really solid and enjoyable watch.

For those unaware, this drama is a remake of the popular Chinese costume drama Go Princess Go. However, this remake does have its own quirks and unique elements.

The story revolves around Bong-Hwan, an arrogant chef who finds himself suffering from a head injury which tumbles him back through time. When he awakens, he’s trapped inside the body of the new Queen, So-Yong. With political powers conspiring to thwart her at any moment, Bong-Hwan does his best to play up his role while desperately searching for a way back to the present.

Shin Hye-Sun and Kim Jung-Hyun absolutely carry this show, with some absolutely electric scenes when they share the spotlight. This one is certainly worth a watch.

Set during the end of the Goryeo period and entering the early Joseon dynasty, My Country: New Age backdrops a changing wave of Korean traditions with two friends caught in an epic conflict.

On the one hand you have Seo Hwi, a warrior whose father is a famous commander. By comparison, Seon-Ho is a smart and talented figure. Unfortunately a corruption scandal involving Seon-Ho’s Father destroys his dreams of passing the military service examination. As things progress, he and Seo-Hwi form an intense rivalry as they disagree over the direction of the country.

Armed with some excellent fight sequences (and some miraculous recoveries from stab wounds!), My Country: New Age is a decent series and one armed with a bittersweet ending. Most Korean dramas take place over the course of 16 episodes. The Empress Ki? A whopping 51! Don’t let that put you off though, The Empress Ki is a really compelling historical epic that centers on (unsurprisingly) Empress Ki.

With all the usual courtroom shenanigans, double-crossings and lofty bites of drama you’d expect, the cast and crew really help elevate this story and make it an epic watch.

While there are a few historical inaccuracies, The Empress Ki makes it very easy to look past that with such a dramatic flurry of episodes.

The Moon Embracing The Sun is a historical drama centering on the timeless forbidden love angle. With good acting and some really cute child actors during the first half, this K-drama certainly boasts a lot of positives.

The story here revolves around King Lee Hwon and a female shaman named Wol. Wol was born from a noble family but became a crown princess. Unfortunately she faced execution but managed to survive, going on to live as a shaman. It’s here where our story really takes off, as Lee Hwon and Wol start to grow closer.

There are a lot of melodramatic moments here, and a pretty good mystery woven throughout too.

Six Flying Dragons is another 50 episode epic and that’s probably the most apt word for this one.

This historical Korean drama centers on the success stories for six people living life right on the cusp of the Joseon Dynasty. In particular, the story centers on Lee Bang-Won who was the third King in the Joseon period. This man was instrumental in helping his father, King Taejo, establish the foundations for this dynasty.

Now, the series isn’t wholly accurate on the historical front but it does have a lot of compelling drama and some really memorable moments.

The Great Queen Seondeok is the longest drama on this list and for good reason too. Although it was originally scheduled to have 50 episodes, the unbelievably high ratings forced the producers’ hands and they expanded the drama to 62.

The story here centers on Queen Seondeok who was born a twin but abandoned as a baby. Later, she was brought back to the Silla palace, joining forces with her sister, Princess Chonmyong. Together, they oppose Mi-Shil who wants to seize power for herself.

This sets up the crux of drama to follow, as the show begins at the end of King Jinheung’s reign and progresses through until the end of Queen Seondeok’s reign.

While there are some historical inaccuracies, this Korean drama is well written and certainly one heck of a rollercoaster ride!

100 Days My Prince is an intriguing Korean drama. While it doesn’t necessarily do anything outstanding, it does tick all the usual boxes one would expect from a period drama.

The story here begins with crown prince Lee Yool falling off a cliff and nearly dying in an attempted assassination. Amnesia-stricken, Lee Yool wanders around for 100 days under a new name and personality. During this period, he meets Hong Sim, head of the first detective agency in Joseon.

What ensues is a period drama that blends comedy, romance and history together into a bubbling pot of goodness. The mystery is engaging and the chemistry between actors helps to elevate this one.

Dong Yi is another long-running historical drama that released 11 years ago. However, it’s still as enjoyable and exciting now as it was back then.

The story is set during the reign of King Sukjong in the Joseon dynasty. The series itself is based on the real-life historical figure of Choi Suk-Bin.

Dong-Yi’s father and brother are members of the Sword Fraternity, which is wrongfully accused of murdering noblemen. Dong Yi then hides her identity and enters the palace as a servant for the Bureau of Music, determined to reveal her family’s innocence and find the true orchestrators of the noblemen’s deaths.

Based on the webcomic “Nokdujeon” by Hye Jin Yang, The Tale Of Nokdu is a bit of a love/hate affair for many drama watchers. If you fall on the love side however, there’s a lot to like.

The story centers on Jeon Nok-Du, a man who lives on an island with his father and older brother. When they’re attacked by a group of female assassins, Nok-Du chases them down.

The girl disappears into a widow village, prompting Nok-Du to disguise himself as a woman and enter. There, he meets Dong-Ju, a woman he earlier helped while adopting his male disguise. As it turns out, she’s actually an apprentice to become a gisaeng.

This romantic comedy certainly has some good laughs along the way, backed up by some compelling acting too.

Not to be confused with the 2001 movie of the same name, the serialized version of My Sassy Girl is arguably better than its movie counterpart. There’s a lot more characterization here too, and the show delivers hearty laughs throughout.

The story centers on a romance between cold city scholar Gyeon Woo and sassy princess Hye-Myung. Taking place deep in the Joseon Dynasty, it’s fair to say she doesn’t have the best reputation among the people.

In fact, Hye-Myung often sneaks out the palace in search of her Mother, the dethroned Queen. One night she meets Gyeon Woo and while they initially start as enemies, that façade soon breaks and they fall in love. 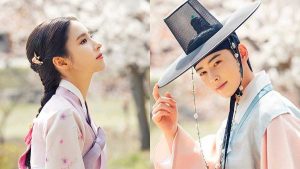 Beginning as a quirky comedy, the story follows hopeful female Goo Hae-Ryung during the early 19th century. She’s recruited to work as the first ever female historian inside the Royal palace.

With a strict hierarchy and traditions to adhere to, the series explores a growing romance between Goo and Prince Lee. Shunned by his Father and hidden away from political affairs, Lee spends his days writing and longing to be rid of his title.

As the episodes progress, Lee finds himself thrust back into royal affairs. In doing so, he and Goo Hae-Ryung become entwined together and start to fall in love.

Moon Lovers: Scarlet Heart Ryeo is a classic time travel story but it’s much less a fantasy and more a historical drama. It’s also another remake, this time the 2011 Chinese drama Scarlet Heart

The story begins with a total solar eclipse, which sends a 25-year-old 21st century woman called Ha-Jin back through time. She ends up in the Goryeo Dynasty and inside the body of Hae Soo, one of the many royal princes of the ruling Wang family. King Taejo is on the throne, but Ha-Jin falls in love with a gentle and warm-hearted Prince Wang Wook.

As the story progresses, Ha-Jin finds herself caught up in palace politics as a rivalry ensues among the princes over the successor for the royal throne.

The ending is suitably bittersweet and the show does an excellent job throughout blending drama and romance together.

And there we have it, our list of best historical Korean dramas of all time! We’ll periodically update this page as we watch more Korean dramas.

4 thoughts on “Best Historical Korean Dramas Of All Time”