Berserk is an ongoing dark fantasy manga written by the late Kentarou Miura. This manga’s jam-packed with mature storytelling, themes, and characters that will impress many readers. The manga’s currently being published in the semi-monthly seinen manga magazine Young Animal. Miura’s childhood friend Kouji Mori and his former assistants at Studio Gaga have taken the mantle of producing more chapters for the manga due to Miura’s unfortunate passing.

If you’re in the mood for more action-centric and story-driven manga that offers a similar vibe, fear not! We’ve gathered together 8 books/manga to check out when you’ve finished reading Uzumaki. Of course, if you feel we’ve missed any of your favorites, do comment below and let us know!

If Berserk was a brother, its sister would be Claymore. Its protagonist Clare embarks on a journey fueled by vengeance akin to Guts’ quest. To seek her revenge, she must overcome various obstacles that’ll challenge her intellectually and physically. Clare and Guts have a no-nonsense mentality and will stop at nothing to make criminals pay for their misdeeds.

Along the way, Clare will encounter many formidable allies who’ll help her become a better warrior. Her enemies boast similar strength but won’t provide her with an easy victory. The fights in Claymore are well-drawn and highly detailed. You’ll find yourself immersed in the panels provided on each page.

Claymore isn’t afraid to spook its readers with disturbing imagery either. If you’re looking for another dark fantasy manga with beautiful artwork and an emotional narrative, check out Claymore. 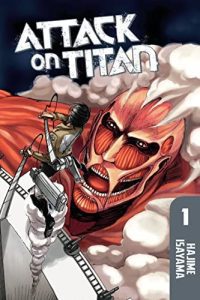 Attack On Titan is a worthwhile read for Berserk fans. It contains similar amounts of gore to keep you on edge and some impressive storytelling to keep you guessing. Although Berserk offers more species variety than Attack On Titan, fans will adore seeing Isayama’s creativity shine through with the Titans.

Besides artwork, Attack On Titan offers a deep and mature narrative. Fans will enjoy seeing the series’s protagonist develop into a more capable strategist and warrior by its conclusion. The series’ side characters offer equal enjoyment as Isayama spends time developing them alongside Eren.

If you’re in need of another series with fantastic action, stellar characters, and horrid beasts, give Attack On Titan a chance.

Where Claymore felt like the female iteration of Berserk, Blade of the Phantom Master feels like the Korean version of it. This manga starts off feeling episodic but it manages to steer toward a clear direction midway through its narrative. The story’s protagonist, Munsu, feels like an anti-hero as he displays questionable ways of achieving specific goals.

Although fans may have their gripes about his methods, Munsu is an intelligent individual and a highly skilled warrior. Depending on the circumstances, Munsu’s character can be enjoyable to follow, especially when readers see him in action. Munsu doesn’t tackle his journeys alone as he’ll be joined by other individuals who’ll make his quest feel more lively and entertaining.

Fans of Miura’s penmanship will adore the Blade of the Phantom Master’s breathtaking artwork. The story’s artist, Kyung-il Yang fabulously captures the tenacity of our characters’ reactions to intense situations. You’ll be blown away by his stellar work and find it challenging not to feel immersed in In-wan Yoon’s beautiful world.

Give this story a shot if you require more captivating stories to read.

Despite being a bit more comedic than Berserk, Chainsaw Man isn’t far from the pack. This series contains high amounts of gore and tackles mature themes involving its protagonist, Denji, and others. Tatsuki Sujimoto’s artwork is breathtaking and makes it easy for fans to immerse themselves in Chainsaw Man’s world.

Our story revolves around Denji, a boy who teams up with a Chainsaw Devil named Pochita. Their lives consist of performing mundane tasks and slaying devils to earn enough profit to pay off Denji’s deceased father’s debt. One day, Denji and Pochita arrive at a warehouse to aid the yakuza in slaying a devil. However, they find themselves betrayed by the yakuza and murdered by the devil’s goons.

Thankfully, Pochita gives his life to save Denji’s well-being. This grants Denji the ability to become a being called Chainsaw Man and lays waste to the yakuza and devil. Later, Denji meets an elite Devil Hunter named Makima, who gives Denji the opportunity to work for Public Safety and attain the life of his dreams. Denji accepts and we follow his life as a fully employed Devil Hunter.

Although Denji’s more of a goofball than Guts, both characters endure some trauma that eats at them occasionally. Denji doesn’t start off as a fierce warrior either. Fans will enjoy seeing Denji master his newfound abilities while fighting numerous devils. The devils have intriguing abilities and designs to keep things refreshing. If you’re looking for a fun action series with a hint of seriousness, check out Chainsaw Man.

You’d be a fool to think Dorohedoro is a childish story based on the cover art. This is a well-written narrative with a good sense of humor and a phenomenal world rich in entertaining characters. Dorohedoro is set in a fantasy world separated by two distinct class-based areas. The Hole is a run-down cesspool full of poorly mutated beings who magic users experimented on.

At the center of it all, is a reptile man named Caiman whose immune to magic and seeks answers. He feels encountering certain magic users could point him toward a possible cure for his illness. The obstacle that constantly stands in his way is his stomach. However, he receives aid from his restaurant-owning female companion Nikaidou.

Dorohedoro and Berserk revolve around fantastical settings where magic plays a vital role. Both stories are drawn in unique ways to keep the viewers’ attention. Where Berserk feels more realistically drawn, Dorohedoro leans into a punk-like aesthetic. The artwork in both mangas gets better over time and fans will adore seeing the artists’ growth. If you’re looking for a smartly-written action series with an engaging art style, check out Dorohedoro.

Although the Akame Ga Kill anime has its issues, many prefer the source materials’ interpretation of the characters, battles, and world. That said, Akame Ga Kill offers more lighthearted comedy than Berserk. Readers can expect the cast to indulge in fun-loving activities before participating in any epic bouts.

On the other hand, Akame Ga Kill can get brutal when it wants to be. Many characters endure brutal fights and wind up dying in the most mind-numbing manner possible. Like its anime, readers shouldn’t grow a strong attachment to its cast. Furthermore, the manga’s protagonist Tatsumi endures many similar situations are Guts does in Berserk.

From being recruited into an elite team to fighting countless monsters and warriors, fans will easily spot the similarities between their quests. The towns and terrain give off a similar fantasy setting as what you’d find in Berserk too. If you’re looking for a fun action-centric series to read after Berserk, consider giving the Akame Ga Kill manga a shot.

Battle Angel Alita is a classic sci-fi manga jam-packed with emotional dialogue, fun action, and well-rounded characters. The series’s female protagonist Gally (Alita) undergoes severe hardship and fans will adore seeing how she changes through the course of the narrative. Berserk and Battle Angel Alita don’t shy away from showcasing the darker sides of humanity.

The forms of cruelty and pain readers will endure during their readthrough of both manga will make their blood boil. These stories also contain large amounts of gore that’ll appeal to action enthusiasts. Despite having vastly different worlds, the entities that traverse each have similar morals and approach situations from a similar standpoint.

Although both protagonists seek sanctuary in their distorted environments, they must fight their way toward that outcome. If you’re looking for another story with a strong lead character and a gruesome world, check out Battle Angel Alita.

Vagabond and Berserk share similar components. Both mangas have impressive visuals and follow a traveling swordsman with a troubling past. Vagabond leans heavily into its historical and martial arts roots as opposed to having its protagonist traverse a fantastical landscape filled with demonic entities.

It’s Vagabond’s realistic aesthetic that drives people to continue reading its narrative. Many will find it astounding that this comes from the same author who showered readers with two manga themed around basketball. With the amount of violence, isolation, and emotional turmoil its protagonist goes through, you’ll appreciate the story Takehiko Inoue delivers with Vagabond. This manga takes place in 16th-century Japan and follows Shinmen Takezou.

He’s scolded by his fellow villagers for his aggressive attitude. This convinces him and his friend to flee their home in search of something grander. They enlist in the Toyotomi army but endure a brutal beatdown at the hands of the Tokugawa Clan. They barely make it out alive in the exchange.

Shinmen and his friend separate as he plans to return home and inform the Hon’iden family about his friend’s survival. Unfortunately, Shinmen gets framed for his friend’s supposed murder and gets tied up to a tree to die. A wandering monk notices Shinmen and helps him out. He brands him the new name, Musashi Miyamoto. Thus the manga follows Musashi’s new life as an outlaw.

So there we have it, our 8 books/manga to read after you finished Berserk.