Aku No Hana is a psychological romance written by Shuuzou Oshimi. This manga contains disturbingly relatable situations and cunning characters. It takes several suspenseful turns that’ll leave you unhinged. Aku No Hana was serialized for Kodansha’s Bessatsu Shonen Magazine between September 2009 to May 2014. The series compiles over 11 manga volumes and an anime adaptation that’s received mixed reception for its bizarre art style.

If you’re in the mood for more psychological romance manga that offers a similar vibe, fear not! We’ve gathered together 8 books/manga to check out when you’ve completed Aku No Hana. Of course, if you feel we’ve missed any of your favorites, do comment below and let us know!

Regarded as one of the most depressing experiences ever, Oyasumi Punpun has an emotionally gripping narrative coupled with well-written characters. Inio Asano’s art style will leave many readers starstruck by the level of detail put into his character and structure designs. Everything looks unimaginably realistic and will help any reader immerse themselves in the story.

Our tale follows a toddler named Punpun Onodera who lives in Japan. Punpun is idealistic and romantic but loves to keep to himself. This all changes when he meets a new female classmate named Aiko Tanaka. He gains feelings for her. However, he gets overcome by intrusive thoughts that plague his mind.

Unfortunately, Punpun witnesses his father abusing his mother, influencing him to head toward a spookier path. Like Aku No Hana, Oyasumi Punpun is grim, heartbreaking, and a saddening roller coast that never ends. You’ll be hoping for a happier result, but Asano never gives it to you. If you’re looking for another mentally-draining work that reflects the darkness that dwells in most humans, check this one out.

One day, Kurosawa notices popular girls bullying a girl named Aya Kitahara. Although he doesn’t mind seeing people squabble, he gets revenge for Kitahara by performing a sensual act on the bully’s clothes. Things don’t go accordingly as Kitahara confronts him about his actions the following day. She blackmails him into terrorizing the other girls in his class using similar methods.

With no choice, Kurosawa accepts and we follow his journey filled with personal growth and consequences. Kurosawa will endure similar trials that will overcome him with guilt and anxiety. Like Aku No Hana’s Kasuga, Kurosawa undergoes similar issues regarding alienation and becoming a better person. Check this one out if you’re looking for a disturbing manga with great assessments of human nature.

No Longer Human is another dark that has the reader following its events through the first-person perspective. It tackles themes concerning social exclusion, alienation, and depression. This story will drench readers in a large pool of sadness that gets more and more gloomy as the narrative continues.

This tale centers on Ooba Youzou, a cowardly individual who doesn’t have the courage to reveal his true feelings to others. With his low-class physicality and the relentless abuse he’s endured from a relative, Youzou hides his saddening past by acting like a shallow clown near others. This manga contains some satisfying psychological themes.

Usamaru Furuya & Osamu Dazai manage to make readers feel sympathy toward Youzou and his secretive situation. The manga’s artwork will leave readers entranced by its phenomenal shading and precise linework. This isn’t for the faint of heart as our authors don’t hold back in tackling sensitive topics. However, they handle these situations with care and seriousness. Give this manga a read if you’re looking for a series that excellently explores the human psyche.

We Did It – Muneyuki Kaneshiro

No one enjoys receiving karma. It’s a belief that serves as a double-edged sword on most occasions. Aku No Hana and We Did It are two manga that delves deeper into this concept by featuring a protagonist whose down on his luck. These stories harbor dark imagery and a chilling atmosphere. The situations are characters endure will haunt you and some may feel it hits close to home.

Despite being in dysfunctional relationships, these series do an excellent job of portraying how our male protagonists’ unpleasant circumstances impact their growth and adulthood. If you’re looking for an excellent manga with great tension and similar themes, give this one a read.

We Did It follows Tobio Masubuchi, who dreams of living a satisfying life. He and his friends live wonderful livelihoods until some delinquents overhear one of his friends named Maru saying they should perish. Maru gets kidnapped and beaten to a bloody pulp. Frustrated, Tobio proposes that they take revenge on the delinquents. Unfortunately, their plans lead to dire consequences, which will convert their peaceful lifestyles into something more horrific. 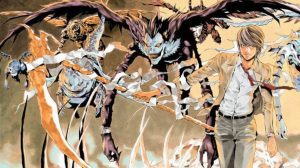 Death Note is a well-written story full of clever plot twists, suspense, and thought-provoking elements. Like Aku No Hana, this manga showcases its protagonist undergoing a downward spiral because of the external obstacles surrounding him. This manga contains a small romantic subplot but doesn’t delve into that territory too much.

This manga chooses to highlight the epic mind games between its generously psychotic protagonist and his calm and intelligent adversary. These games never get tiring or old. You’ll adore the way the protagonist’s adversary meddles in his affairs. With a touch of supernatural elements and violence, this is a must-read manga for anyone who adores crime-based narratives.

Our story follows Light Yagami, a high schooler who wants to rid his world of all crime. He stumbles upon a supernatural notebook called the Death Note. This allows its wielder to murder anyone they choose as long as their full name is written on its pages. As you expect, Light uses the book to murder several criminals. He becomes infamous for his deeds and dawns the alias Kitra.

Despite being monitored by the Death Note’s creator, Ryuk, Light runs into trouble. A talented young detective named L wishes to challenge Light and bring him to justice for his twisted actions. Several mind games and dark events await you in this gritty cat and mouse styled detective story.

Blood on the Tracks is an incredible manga filled with mature themes, dark imagery, and heartbreaking scenarios. This manga isn’t for the faint of heart as its female lead will do all that she can to get under your skin. From thwarting her son’s attempts at romance to trapping him in a room until he aligns with her ideals, there are many bone-chilling events that transpire in this work.

Shuuzou Oshimi’s art style is equally disturbing. From realistic facial expressions to clever use of manga panels, Blood on the Tracks will feel almost too realistic for some folks to handle. If you found the corrupted relationships Kasuga got forced into terrifying and heartbreaking, you’ll attain similar emotions from this manga.

Our story revolves around Seiichi Osabe, a lonely child who lives an ordinary life. He has friends, a middle school crush, and loving parents. That’s at least what others believe. Within his household lies his overprotective mother. Her influence over him makes people believe he’s a mama’s boy. After Seiichi realizes his mother’s manipulative tactics, he tries freeing himself from her grasp.

A Silent Voice was a wonderful film that touched upon bullying, friendship, and redemption. However, like most anime adaptations,. there were aspects from its source material that weren’t included. While some elements that were cut weren’t necessary, the manga sheds light on our protagonist’s life before enacting his bullying assault toward the story’s female lead.

These aspects help readers get more of an idea of the protagonist before his horrid actions. Furthermore, the side characters in the film played a larger role in the manga, allowing readers to understand how their friend group functioned beforehand. Nonetheless, both iterations offer enough drama and romantic elements to keep you hooked.

Like the anime, the story follows Shouya, an elementary school bully who picks on his deaf classmate Shouko. His crude remarks and actions cause Shouko to transfer schools. Everyone in his school starts ridiculing and shunning Shouya all the way to high school. He’s grown quite a lot but can’t get his past mistake out of his mind. However, when he spots Shouko again, he vows to shower her with friendly actions in hopes of removing the guilt that dwells in his mind.

The Climber is an autobiographical and atmospheric manga. It’s based on a mountain climber named Buntaro Kato and documents his travels over the world. While this manga offers a sports theme unlike Aku No Hana, how it delves into Kato’s mindset is similar to how Oshimi examines Kasuga’s inner thoughts in his work.

The Climber’s artwork can feel hit or miss to some folks. It has a more realistic touch than Aku No Hana regarding its character and landscape designs. On the other hand, its protagonist Mori Buntaro’s lack of socialization skills will remind people of Kasuga’s status in Aku No Hana. Mori has similar trouble forming strong relationships too.

Readers will enjoy seeing how Sakamoto develops Mori out of his shell though. With its intriguing protagonist, thought-provoking atmosphere, and distinct art style, fans should give The Climber a chance.

So there we have it, our 8 books/manga to read after you complete Aku No Hana.