Check Out These Historical & Brutal Anime!

Vinland Saga was one of those manga many fans dreamed of getting a solid anime adaptation. While many other anticipated anime works didn’t end up delivering upon fans’ expectations, Vinland Saga was a series that managed to capture the same excitement fans had for its source material.

Vinland Saga takes place during a non-stop war between England and the Danes. While people are losing their lives, a third party of Vikings is relishing every minute of it. All of them except for a boy named Thordfinn. Thorfinn isn’t a fan of the war, but he does seek bloodshed. His goal is to murder Askeladd, a menacing warrior who killed his father.

Vinland Saga takes place during a non-stop war between England and the Danes. While people are losing their lives, a third party of Vikings is relishing every minute of it. All of them except for a boy named Thordfinn. Thorfinn isn’t a fan of the war, but he does seek bloodshed. His goal is to murder Askeladd, a menacing warrior who killed his father.

Fear not if you’re having trouble finding anime similar to Vinland Saga! We’ve discovered 10 alternate shows that’ll give you a similar experience as Vinland Saga.

So without further ado, we present 10 TV shows that should whet your appetite when you’ve finished streaming Vinland Saga!

Before being animated by Studio MAPPA, Attack On Titan was one of Wit Studio’s most beloved works. From its iconic first opening to its fluid animation, it’s no wonder fans often miss Wit Studio being at the helm of its adaptive process. Visuals aside, Attack On Titan has a lot of things in common with Vinland Saga.

Both anime revolves around the main character seeking revenge toward those that wronged their family. Both anime demonstrates the struggles our protagonists go through to achieve said vengeance. The side characters in both anime assist the main character in achieving their goal while forging pathways toward their desires. 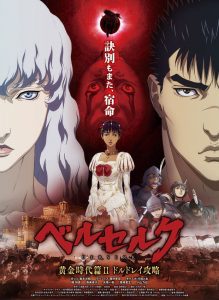 Berserk is an incredible trendsetter that went on to influence many media outside of anime and manga. From Dark Souls to Devil May Cry, Berserk is regarded as one of the most mature anime and manga to date. Like Vinland Saga, this series is rooted in violence, abuse, and psychological trauma.

Berserk follows Guts, a man who gets involved with a powerful syndicate led by a fierce warrior named Griffith. Some time passes, and Guts becomes the commander of this syndicate and helps Griffith escape victorious after every battle.

Despite all being well, Guts learns that there’s hidden darkness lurking within the shadows. This is a brutal anime with mind-numbing visuals and an impressive storyline. Vinland Saga fans who don’t mind bloodshed and menacing series should give Berserk a try.

Dororo follows Hyakkimaru, a boy aiming to survive in this cruel world with prosthetics and weapons. He embarks on a quest for growth and revenge as his goal is to wipe out every demon that stands in his way. Like Vinland Saga, this anime doesn’t shy away from violence.

You’ll witness many creatures and humans suffer at the hands of these demonic entities. While its characters appear childlike, the circumstances they endure are far from joyful. You’ll appreciate the anime’s narrative and historical setting a lot. The visuals are on par with what you’d find in Vinland Saga.

The best aspects of Dororo stem from Hyakkimaru’s internal journey. As the series progresses, you’ll notice him adopt more human-like qualities and mannerisms. This alone makes the adventure feel worthwhile as you’ll feel attracted by how Hyakkimaru reacts to his environment with each episode. If you’re looking for a worthwhile adventure anime with compelling characters, check out Dororo. Looking for a historical anime with a mafioso theme and revenge storyline? 91 Days has you covered. Like Vinland Saga, fans will find 91 Day’s characters and visuals fascinating. The story itself is reminiscent of Vinland Saga as its protagonist seeks vengeance on a specific group for murdering his family.

The prime difference is that 91 Days revolves around the mafia while Vinland Saga tackles vikings. Otherwise, fans can expect 91 Days to deliver plot twists, intense action, and satisfying emotional bits. 91 Days does a fine job of building tension with each episode.

You can expect the show to feature a wonderful blend of pleasant and brutal imagery to keep viewers on their toes.

Saga of Tanya the Evil

Saga of Tanya the Evil is an intriguing anime that follows a protagonist that fans will either enjoy or despise. Tanya Degurechaff is not a saint and will throw herself into the heat of battle at any chance she gets. While she may appear like a lustful maniac, the anime does a fine job of fleshing out her character by the story’s end.

This anime follows Tanya, an infamous soldier known for her predatory behavior and hunger for bloodlust and tactical combat. However, Tanya isn’t just any homicidal female toddler. She used to be a man in another life but that all came crashing down after she lost a challenge against a self-proclaimed god called Being X.

Upon losing to X, Tanya ended up being reincarnated into the war-centric female toddler people know her as today. Therefore, while climbing the ranks of her country’s military, Tanya hopes to find Being X again and make him pay for what he had done.

As one can tell, this anime goes all out in its bonkers storytelling and features Tanya enduring many harsh activities that will put her wits to the test. If you’re looking for an anime that follows an insanely captivating protagonist who adores warfare and destruction, check out Saga of Tanya the Evil.

The Mobile Suit Gundam series is one of the pioneers that got many fans in the early 80s into the Mecha genre. This franchise is loved for its fun robot fights and sci-fi atmosphere. The action in Mobile Suit Gundam: The Origin is on par with what you’d find in Vinland Saga.

Our tale takes place in the distant future and follows Casval, whose life turns upside down when he discovers his father has been assassinated by someone. As soldiers loyal to his father assist Casval and his sister Artesia, the siblings are taken from their home, separated, and forced to become soldiers.

As an intergalactic war molds Casval into a legendary pilot, he must confront a militarized version of his father’s ideology. As one can tell, this anime adopts a similar revenge plot to Vinland Saga’s. Both Thorfinn and Casval end up serving their father’s murderer and must claim fame if they want a chance to enact their vengeance.

If you’re looking for another great anime where our protagonist works his way toward revenge, check out Mobile Suit Gundam: The Origin.

Golden Kamuy is a fun adventure anime with historical themes and likable characters. The protagonists in this show get caught up in intriguing dilemmas that will require them to throw a few punches and kicks to proceed. Mind you, Golden Kamuy leans more into its comedy.

Where Vinland Saga feels serious the whole way through. Golden Kamuy doesn’t shy away from depicting its characters in a cheerful manner. That said, fans shouldn’t downplay this show for having a more joyous atmosphere. Our characters will come across scenarios that will make them upset, urging them to offer a helping hand.

At the same time, Golden Kamuy delivers stellar scenery, urging viewers to glare at its various landscapes, terrain, and structures. Furthermore, if Thorfinn’s motivation spoke to you then you’ll feel right at home with Golden Kamuy’s protagonist Saichi. Fans looking for an anime that offers a nice blend of comedy and action should give Golden Kamuy a shot. The world of Hunter X Hunter is incredible. With its numerous fleshed-out protagonists and antagonists, unique power system, and excellent utilization of shōnen tropes, this is a show that’ll have you hooked after its first major arc. That said, Hunter X Hunter offers more variety with its universe than Vinland Saga does.

While each arc offers something new for our characters to tangle with, the series’s creator Yoshihiro Togashi manages to tie everything together under a neat bow. However, fans shouldn’t downplay this show for following a child protagonist. Gon, the protagonist in question starts off flat but eventually becomes more dynamic throughout the run of the show.

The same can be said for the show’s side characters. Each character offers something fun and refreshing to the story to keep viewers hooked. For instance, Gon’s friend Kurapika follows a similar revenge-seeking character arc as Thorfinn. Instead of wanting to avenge a relative, Kurapika wants to murder the gang responsible for murdering his clansmen.

It’s things like this that make Hunter X Hunter fun to watch. If you’re looking for something that’ll keep you entertained, check this show out.

From one anime with a cutesy protagonist to another, we arrive at Ringing Bell. This film feels like a more gritter take on Bambi if he was a deranged psychopath. Ringing Bell is an extremely violent anime with a similar revenge storyline as Vinland Saga.

This anime follows Chirin, a newborn lamb who enjoys living with his mother in a meadow. Unfortunately, a wolf named Wor murders Chirin’s mother. To avenge his mother, Chirin becomes Wor’s apprentice in hopes of getting enough strength to make him pay.

While the premise is simple, Ringing Bell doesn’t hold back with its violent depictions. This isn’t an anime worth showing your children unless you want to traumatize them. This is a work full of mature themes and imagery.

Seeing Chirin go from a naive lamb to a cold-blooded killer is what drives the narrative forward and keeps people invested. If you ever wanted to see a darker take on Bambi, give Ringing Bell a shot.

Following the trend of murder and mentorship is Assassination Classroom. This show has two seasons full of fun action, character development, and school-life activities. This show follows a group of delinquent students tasked to murder their alien teacher Koro-sensei before he destroys the Earth.

The mission won’t be easy as Koro-sensei can travel at Mach 20 speeds and is a skilled assassin himself. This series focuses on Koro-sensei’s bond with his students and shows he’s not as bad as people claim he is.

Assassination Classroom will make you care about Koro-sensei and the students. Although some side characters don’t get much spotlight, the ones that do are fully fleshed out and developed throughout both seasons.

If you’re looking for an anime like Vinland Saga that offers similar concepts but contains more comedy, check out Assassination Classroom.

So there we have it, our 10 anime/TV show alternatives to watch when you’ve caught up with Vinland Saga!