Exploring More Of The After Life

Tomorrow is the latest supernatural drama on Netflix, revolving around Jun-Woong who joins the Reapers as they head out to try and stop people from committing suicide.

So without further ado, we present 10 TV shows that should whet the appetite when you’ve finished streaming Tomorrow.

The Uncanny Counter is an action-packed Korean drama revolving around a dysfunctional group who team up to take on high-powered demons. With a premise similar to Tomorrow, the drama here revolves around a boy called Mun who’s traumatized by the death of his parents as a child. Raised by his grandparents, Mun finds himself thrown into the world of demon-hunting as he’s made a member of the illustrious Counters.

Armed with super strength and an array of different abilities, the Counters get wrapped up in a wide-spanning political conspiracy involving the Mayor and a Director of a local company. Things are unfortunately made even more complicated by a level 4 demon called Cheong-Shin who kills one of the Counters and begins a murderous rampage. Drama, comedy and fantasy combine beautifully to make a really satisfying watch.

You can read our thoughts on The Uncanny Counter in our full season review here!

Terry Pratchett books have a very distinct humour that’s sometimes hard to translate onto the big or small screen. Thankfully Amazon Studios rolled up its sleeves and opened its chequebook back in 2019 to deliver a very funny, quirky drama in Good Omens.

With a tasteful amount of religious humour and a story that builds to a climactic showdown at the end, Good Omens blends a mythological story involving Gods and Christianity around some trademark Pratchett humour. Oh, and it also features a pretty stacked cast too!

While tonally different to other shows on this list, the compelling story should be enough to keep you sticking around for more.

You can read our thoughts on Good Omens in our full season reviews here!

With an original story and some great chemistry from its cast, this latest K-Drama hits all the right notes when it comes to humour, tension and world building. It tackles a lot of important themes about life and death too, along with the consequences of our actions, which serves up a nice layer of depth to this series.

The drama excels with its world building, showing us how people are judged after they pass away and what happens afterwards. There is a strong sense of karma running throughout, with emphasis on how our past actions will reflect our next life – or even our future.

Hotel Del Luna may not be the strongest drama on the list, nor does it do anything particularly outstanding with its story. However, it does pack one heck of an emotional punch and arguably trumps every other drama from 2018 for its soundtrack. It’s also another classic IU masterclass in acting.

Hotel Del Luna refers to a gateway hotel between the real world and the after life which this drama takes place in. Following a bright opening act, a lot of the middle episodes fall into an episodic format until the third act starts to ramp up the drama, light horror elements and emotion.

There are some truly emotional scenes peppered throughout and the finale is certainly one of the most gut-wrenching episodes of Korean TV in quite some time. The supernatural elements and world building are excellent throughout and the cinematography is really impressive too.

Black is a surprisingly popular and high rated OCN K-drama. It’s also one that’s garnered a fair amount of polarizing opinions from fans, who generally stay split between loving or loathing this one.

For those willing to take the dive, Black centers on a detective who ends up being possessed by the Grim Reaper. Interestingly, he’s counteracted by Ha-Ram, a woman who can see shadows of death. The pair struggle to save the lives of people across the season, breaking the rules of heaven in the process.

Another show that tackles the afterlife and supernatural events, Black is certainly worth checking out.

Unless you’re really stretching for something to watch, we ordinarily wouldn’t recommend Rugal, which has more plot holes than swiss cheese. However, if you can go into this and switch your brain off, there are actually some decent moments and a good deal of action to keep things moving at a rapid pace.

The story centers on Kang Ki-Beom, an elite police office who’s tasked with taking down the evil Argos, a criminal organization. When Ki-Beom is framed for murdering his own family, the NIS offers him the chance to become a member of Rugal, a special team organized by the NIS. Receiving two artificial eyes with biotechnology built into them, Rugal set out to destroy Argos.

For the action and comradeship between the main cast, this one does have some similarities to tomorrow. 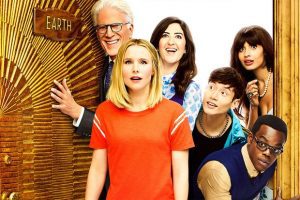 Thanks to an administrative error, selfish Eleanor Shellstrop (Kristen Bell) finds herself in The Good Place after her death. Helped by a well paced script and an enthralling plot boasting plenty of twists along the way, The Good Place is an excellent sitcom. The bold, bright colours help to accentuate the hypnotic beauty of the afterlife and the dry humour is well timed.

The story focuses on Eleanor for vast periods of the season and despite the focal point being her journey from selfish, self-absorbed disaster to a relatively good person, there’s enough attention given to the supporting cast to help flesh them out too.

The premise is crazy yet grounded in realism, the characters are stark contrasts to one another that just seem to gel and the script is decent throughout. With enough intrigue and mystery around future events and a satisfying plot arc throughout the episodes, The Good Place is well worth a watch.

The Devil Punisher is a 2020/2021 Taiwanese series, stretched out across 20 episodes. It’s called everything from a romance to a supernatural time-travel drama. It also introduces some of China’s historic and religious beliefs wrapped in a story about Gods and Humans, relationships and revenge.

The story here revolves around The Exorcism Lord, Chung Keui, who’s also known as the ‘Devil Punisher’. He comes to Earth to put malicious spirits back in their box before they affect humans.

He’s also on a mission to find Lady Meng 1087, who’s kidnapped and brought to Earth. As a result, she loses her memory of her work in the Underworld and Chung. With a sizeable, time-sensitive job, he’s also keen to win the heart of Hsin-Yu, as she’s known on Earth.

Although perhaps a tad overlong, the ideas around the afterlife and a hierarchy of angels working in the afterlife is certainly similar to Tomorrow!

Guardian: The Lonely and Great God

Guardian: The Lonely & Great God is quite simply one of the best Korean dramas ever made. Armed with excellent cinematography, crackling chemistry between its main cast and one of the best soundtracks in this medium, Guardian (often referred to as Goblin) is a wonderful journey from start to finish and a must-watch for fantasy fans.

At the heart of this one lies Dokkaebi (Kim Shin), a 939-year-old immortal who happens to be best friends with a Grim Reaper and a student called Eun-Tak with a tragic past.  As fate would have it, Eun-Tak happens to be his bride who’s destined to break Shin’s immortal curse.

The story takes many twists and turns along the way but manages to nail every single part of its production. When it comes to gold-standard K-Dramas, this one sets a very high bar.

You can read our thoughts on Goblin in our full season review here!

Tale Of The Nine Tailed

Tale Of The Nine Tailed is unashamedly similar to fellow Korean drama Goblin. In fact, along with Lee Dong-Wook and a fantasy setting adopting numerous Gods, both shows will undoubtedly draw a lot of similarities – much to the fault of this fantasy offering.

Although Tale Of The Nine Tailed is nowhere near as prolific as Goblin, it does win some brownie points for the way it integrates Korean folk tales and myths into its main storyline. There’s some great ideas showcased here despite the story taking a few disappointing turns late on.

The main premise revolves around a gumiho (nine-tailed fox) settling down in the city. Only, it’s mercilessly hunted by a strange entity, which is released unwittingly by an investigator known as Ji-A. As the two grow closer together, the story ramps up the fantasy elements.

Tale Of The Nine Tailed is an intriguing series and despite its flaws, captures the essence of Korean urban legends beautifully.

You can read our thoughts on Tale Of The Nine Tailed in our episode reviews here!

So there we have it, our 10 TV show alternatives to watch when you’re finished with Tomorrow on Netflix.