The King’s Affection is the latest historical K-drama on Netflix, featuring a nice blend of romance, comedy and drama.

So without further ado, we present 10 TV shows that should whet the appetite when you’ve finished streaming The King’s Affection.

Based on the webcomic “Nokdujeon” by Hye Jin Yang, The Tale Of Nokdu is a bit of a love/hate affair for many drama watchers. If you fall on the love side however, there’s a lot to like.

The story centers on Jeon Nok-Du, a man who lives on an island with his father and older brother. When they’re attacked by a group of female assassins, Nok-Du chases them down.

The girl disappears into a widow village, prompting Nok-Du to disguise himself as a woman and enter. There, he meets Dong-Ju, a woman he earlier helped while adopting his male disguise. As it turns out, she’s actually an apprentice to become a gisaeng.

This romantic comedy certainly has some good laughs along the way, backed up by some compelling acting too.

Mr Queen is a hilarious, well-written body swap comedy, set deep in the heart of the Joseon Era.

Despite a polarizing ending and a couple of misfires along the way, this historical drama is undoubtedly a really solid and enjoyable watch.

For those unaware, this drama is a remake of the popular Chinese costume drama Go Princess Go. However, this remake does have its own quirks and unique elements.

The story revolves around Bong-Hwan, an arrogant chef who finds himself suffering from a head injury which tumbles him back through time. When he awakens, he’s trapped inside the body of the new Queen, So-Yong. With political powers conspiring to thwart her at any moment, Bong-Hwan does his best to play up his role while desperately searching for a way back to the present.

Shin Hye-Sun and Kim Jung-Hyun absolutely carry this show, with some absolutely electric scenes when they share the spotlight. This one is certainly worth a watch.

Beginning as a quirky comedy, the story follows hopeful female Goo Hae-Ryung during the early 19th century. She’s recruited to work as the first ever female historian inside the Royal palace.

With a strict hierarchy and traditions to adhere to, the series explores a growing romance between Goo and Prince Lee. Shunned by his Father and hidden away from political affairs, Lee spends his days writing and longing to be rid of his title.

As the episodes progress, Lee finds himself thrust back into royal affairs. In doing so, he and Goo Hae-Ryung become entwined together and start to fall in love.

100 Days My Prince is an intriguing Korean drama. While it doesn’t necessarily do anything outstanding, it does tick all the usual boxes one would expect from a period drama.

The story here begins with crown prince Lee Yool falling off a cliff and nearly dying in an attempted assassination. Amnesia-stricken, Lee Yool wanders around for 100 days under a new name and personality. During this period, he meets Hong Sim, head of the first detective agency in Joseon.

What ensues is a period drama that blends comedy, romance and history together into a bubbling pot of goodness. The mystery is engaging and the chemistry between actors helps to elevate this one. 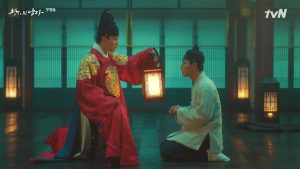 The Crowned Clown is a dramatic, politically charged series awash with tension, twists and turns. With a satisfying conclusion and impressive cinematography throughout, this Korean drama delivers on all levels.

Set in Joseon, the Royal family are in a state of disorder following a number of uprisings among the unhappy populous. A power struggle for the throne soon ensues, with the maniacal Lee Hun ruling with an iron fist. The Queen Dowager, along with close advisor Sin Chi-Soo, plot to overthrow the King.

When an entertainer arrives in town bearing the same face as the King, Lee Hun switches places with the pretender. Unprepared and in over his head, with the help of both Eunuch Jo and the Royal Secretary Ha Sun takes the throne.

Sungkyunkwan Scandal is a fun historical drama, set during the heart of the Joseon Dynasty. The show itself centers around 4 young handsome students who study at Sungkyunkwan University, telling the story of their love and friendships.

Kim Yun-Hee is a smart, responsible young woman. When her father passes away, she takes the place of her brother and disguises herself as a man to take the men’s national exam. On exam day, Yun-Hee meets Lee Seon-Joon and the pair become friends.

Yong-Ha meanwhile, is good with singing, drinking, and also popular with the ladies. So naturally, he discovers Yun-Hee is a woman. Rounding out this quartet is Jae-Sin, an impulsive guy who acts before thinking.

There’s a lot going on in this one but the drama and romance makes for a delightful historical romp.

Love in the Moonlight

Love in the Moonlight is another historical K-drama that centers on the idea of a female disguising herself as a male. Ra-On is our main protagonist and she dresses up as the opposite sex, setting to work counseling different men on dating.

Due to a love letter she wrote for a client, she ends up meeting Crown Prince Hyomyeong. With her unaware he’s the Crown Prince and he unaware that Ra-On is a woman, a fun little game of cat and mouse ensues.

This show is a fun, lighthearted romp for the most part, but don’t expect much in the way of twists and turns or crazy shocks as you’re unlikely to find that here!

Moon Embracing The Sun is a historical drama centering on the timeless forbidden love angle. With good acting and some really cute child actors during the first half, this K-drama certainly boasts a lot of positives.

The story here revolves around King Lee Hwon and a female shaman named Wol. Wol was born from a noble family but became a crown princess. Unfortunately she faced execution but managed to survive, going on to live as a shaman. It’s here where our story really takes off, as Lee Hwon and Wol start to grow closer.

There are a lot of melodramatic moments here, and a pretty good mystery woven throughout too.

Maybe cheating a little with this entry, Splash Splash Love is a TV movie split across two episodes. It originally aired back on MBC in 2015, but remains an endearing title to this day.

The story revolves around a senior high school student called Dan-Bi. She happens to have a special ability to transport anywhere on rainy days. For her university entrance exam, Dan-Bi crumbles under the pressure and runs away, straight into the rain and subsequently the Joseon period.

Unwittingly, she finds herself transported into the Joseon period. While there, she meets Lee Do. He’s a young King and as one would expect, romance and drama ensues.

This is a super sweet watch and there’s some good laughs in here as well.

If you’re after something that depicts strong females locked in an epic feud, look no further than Queen: Love and War. The premise is straight forward and it’s not too complicated either.

The story ultimately revolves around Eun-Bo’s twin sister being murdered. Off the back of this, Eun-Bo remains dead-set on finding exactly who’s responsible for this. For the time being, she decides to become the Queen but she also has to fool King Lee Kyung and compete against the other women in the selection process in order to do that.

So there we have it, our 10 TV show alternatives to watch when you’re finished watching The King’s Affection on Netflix.