So without further ado, we present 10 TV shows that should whet the appetite when you’ve finished streaming Stranger Things. 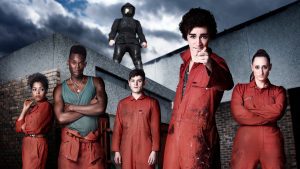 I Am Not Okay With This

Netflix’s latest teen drama I Am Not Okay With This is another unfortunate cancellation casualty. However, it’s undeniably similar to Stranger Things for its depiction of teen drama and supernatural elements.

The story here follows Sydney, a teenage girl with a lot of problems. Juggling her Father’s death, her estranged relationship with her Mother and her best friend finding love and drifting away, Sydney is overcome with emotions.

This spills over in the form of inexplicable supernatural powers that sporadically appear during stressful moments. What follows is a fast-paced journey that sees Syd grapple with the usual high school woes you’d expect while running a superhero origin story in the shadows.

In terms of tone, scope and ideas, I Am Not Okay With This is well worth a watch – cliffhanger ending and all.

Fringe feels like a modern day X-Files, taking what made that show so great and adding a scientific edge to proceedings. The later seasons are absolutely fantastic and add some really shocking twists to the fold too, breathing new life into this show.

Fronting these various cases is F.B.I. agent called Olivia Dunham, who’s forced to work with an institutionalized scientist named Walter Bishop. Together with Walter’s estranged son Peter, they start to uncover various strange phenomena. These episodic cases are mixed in with a larger conspiracy that engulfs the series.

Fringe expertly blends these two narrative arcs together and tops it off with an excellent dynamic between the characters, growing and evolving over time to produce a really gripping sci-fi series.

Wayward Pines is one of those shows you really need to suspend your belief and logic to enjoy fully. While the second season does tend to go off the rails a bit, the first season serves up a decent amount of drama across its run-time.

The story here revolves around secret service agent Ethan Burke, who arrives in the town of Wayward Pines with a big mission. Two federal agents have gone missing and it’s up to him to work out what’s happened. Only, instead of answers he finds himself consumed with even questions.

As he starts to dive head-first into the rabbit hole, Ethan realizes to his horror that he may never get out of Wayward Pines alive.

As far as compelling mysteries go, Wayward Pines has some nice ideas even if it does deliver answers a little too quickly. Despite that, there’s certainly enough here to enjoy.

The End of the F**king World

With a title like The End Of The F***king World, you’ll know very early on whether this dark comedic drama is for you. Split across two seasons and chock full of witty jokes, this British series certainly does a great job making the most of its limited run-time.

The show follows two damaged teenagers, James and Alyssa, as they embark on a road trip to escape their mundane lives. James is engulfed in murderous thoughts whilst angry teen Alyssa hates her Step Dad and pretty much everyone else in the world… except James.

The jokes are well timed, the clever switching narrative between the damaged characters helps to empathise with both teen and the short length makes this a very easy show to sit through. This one’s a must-watch.

You can read our thoughts on The End of the F**king World in our full season review here!

Split across 13 episodes, this familial drama blends elements of Stranger Things, Riverdale and Outer Banks to deliver a fun-filled treasure hunt. While the story does have some narrative inconsistencies and a bit of filler midway through, there’s enough in this to enjoy.

The basic premise revolves around brothers Joe and Frank Hardy, who act as amateur sleuths and become mixed up in large and dangerous mysteries. It’s a very simple hook and one that’s evolved and expanded beyond the books for this 2020 adaptation.

The Hardy Boys is a really fun ride and definitely worth watching if you like treasure hunt adventures.

Channeling those familiar small-town vibes and mixing that in with light touches of horror and suspense, Black Spot certainly shares some similarities to Stranger Things.

The story here revolves around the small, isolated town of Villefranche. Living within is Police-Major Laurène Weiss, who’s head of the police department. Surrounded by forestry and mountains, Prosecutor Franck Sirani arrives to find out just why the town’s murder rate is six times higher than the national average.

With whispers of the forest being a dangerous place and a steady string of fresh corpses showing up, this supernaturally charged crime drama certainly delivers the goods. There’s some nice twists along the way and 2 seasons of this psychologically charged series to enjoy.

So there we have it, our 10 TV show alternatives to watch when you’re finished with Stranger Things on Netflix.