Jumping Between The Folds

Shadow and Bone is the latest high fantasy series on Netflix. With impressive world-building and some nicely fleshed out characters, this could be another hit for the streaming platform.

So without further ado, we present 10 TV shows that should whet the appetite when you’ve finished streaming Shadow and Bone.

Geralt is joined on this hunt by Ciri, a princess in a neighboring city and a mage-in-training named Yennefer. Across this first season, the show balances investigative work with monster slaying really well, which should satisfy those looking to scratch that high fantasy itch. 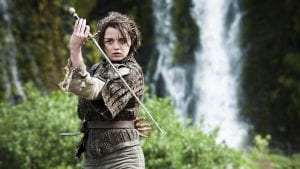 The story begins with castle guard Rian stumbling upon a dark secret held by the Skeksis and finds himself on the run. Meanwhile, intelligent Princess Brea is given a prophetic message, leading her to uncover secrets of her own in her home, Ha’Rar. The third character, Deet, teams up with the hilarious Podling Hup and sets out on a mission too.

Spread across 10 episodes and utilizing an abundance of practical effects, puppets and wondrous storytelling, Age Of Resistance is the perfect accompanying piece to the original film. Dark Crystal is a must-watch fantasy series.

Avatar is a fantastic animation that’s a must-watch for kids and adults alike.

The series itself revolves around a world divided into four elemental nations: The Northern and Southern Water Tribes, the Earth Kingdom, Fire Nation, and the Air Nomads. The Avatar uphold the balance between nations and up until the start of the first episode, everything seems to be peachy. That is, until the balance of power shifts.

Animated Netflix fantasy The Dragon Prince is a formulaic but hugely fun series. What it lacks in originality though it more than makes up for with bucket-loads of charm and an incredibly well-told and absorbing plot-line.

This world paints a fantastical picture of dragons, magic and sword fighting, all encapsulated in a bitter war between Elves and Humans.  The story picks up with the Kingdoms teetering on the edge of all-out war.

At the center of this are three key characters who form the backbone of this story. Callum and his pet Glowtoad are joined by his brother and heir to the throne, Prince Ezran. Outcast elf Rayla rounds out the trio, a character who was actually sent to kill them both originally. Together they set out to complete a dangerous mission.

With multiple seasons to get through, The Dragon Prince is and excellent fantasy series and well worth a watch.

You can read our thoughts on The Dragon Prince in our full season reviews here!

So there we have it, our 10 TV show alternatives to watch when you’re finished watching Shadow and Bone on Netflix.