One day, she receives a video game and plays it. Not only is this not the game she ordered, but it also allows a wizard called Riri to enter her world. Riri explains that Anzu is their company’s first test subject in their plan to fix Japan’s dwindling population.

To ensure Anzu’s success, Riri confiscates her three favorite items and plans to return them once she’s achieved romance. To spite Riri, Anzu intends to become a Romantic Killer who can defy romance. She hopes that her consistent lack of interest in romantic affairs will provoke Riri to quit and return her life to normal. Unfortunately, her plans are thwarted when she meets Tsukasa, a popular Ikemen in her school.

Fear not if you’re having trouble finding anime similar to Romantic Killer! We’ve discovered 10 alternate shows that’ll give you a similar experience as Romantic Killer.

So without further ado, we present 10 TV shows that should whet your appetite when you’ve finished streaming Romantic Killer! 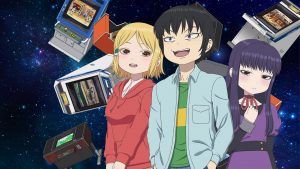 Are you looking for another romantic comedy gem from Netflix? Hi-Score Girl has you covered. This excellent show mixes retro gaming, romance, and comedy effectively. This Netflix gem is jam-packed with likable characters and a beautiful coming-of-age narrative.

Our tale takes place in 1991, when arcade games were the talk of the town. We follow a male protagonist Haruo, who is fond of video games. He dreams of becoming a successful gamer. Although a few local arcades praise him for his pride, his status crumbles when he’s defeated by a girl named Akira.

Despite Akira’s affluent lifestyle and intelligent brain power, Haruo loathes her for his loss. What starts as a playful rivalry transforms into something romantic and relatable. You’re mistaken if you thought it would simply focus on their childhood years.

While the protagonists in this show appear younger than Anzu and her friends, the series does dive into Akira and Haruo’s lifestyles as teenagers. Fans will enjoy seeing our child-like protagonists grow up and undergo emotional change. If you’re looking for another compelling romance anime with video-game elements, check out Hi-Score Girl.

You can read our thoughts on Hi-Score Girl in our full-season review here!

One day, Chiyo encounters Nozaki, who mistakes her romantic confession as an autograph request since he’s a famous manga author. Furthermore, Chiyo ends up in more misunderstood shenanigans with Nozaki, leading her to become one of his manga assistants. Therefore our tale delves into Nozaki and Chiyo’s partnership. As she helps the manga author with his studies, Chiyo hopes Nozaki will understand her true feelings.

Like Romantic Killer, Monthly Girls Nozaki-kun places our protagonist in multiple hilarious and embarrassing scenarios. Fans will adore seeing Chiyo struggle to live up to Nozaki’s expectations and her failed attempts at confessing her love to him. This show builds Nozaki and Chiyo’s bond well, and fans will love its natural progression. Gamers is one of those anime that doesn’t feature a unique premise. The plot can be predictable and bland. Where it fails to deliver an original narrative, it succeeds in creating a world full of chaos and hilarity. With a touch of romance, friendship, and gaming, this series offers fans an enjoyable outing.

In it, we follow Keita, a boy who lives a similar mundane gaming life to Anzu’s in Romantic Killer. Eventually, Keita meets his school’s popular female student, Karen. After discovering Keita’s adoration for gaming, she insists he joins their high school gamers club. Absurd shenanigans ensue as Keita explores a new side of gaming he’d never discover.

Although it offers some incredible gaming-themed scenes, this anime thrives from its characters. Gamers’ characters have vast gaming knowledge but don’t know anything about romance. Like Anzu, viewers can expect Keita and Karen to become puzzled whenever someone brings up love. From funny facial expressions to exaggerated reactions, this show promises to entertain.

If you’re someone who doesn’t mind anime that lacks complexity and thrives off endless hilarity, check out Gamers.

New Game is an anime where you can sit back and relax. This anime offers a semi-realistic view of video game design and programming. There aren’t any romantic quarrels in this show. However, some of its dramatic bits will keep fans on their toes.

This show centers around Aoba, a high school graduate hired by Eagle Jump, a gaming company that makes her favorite game series Fairies Story. On her first day, Aoba learns she will be working on a new installment of her favorite series and will be under the wing of Kou, the game’s lead character designer.

With the help of several others, Aoba vows to help Eagle Jump produce a worthwhile sequel in the Fairies Story series. Unbeknownst to Aoba, this task won’t be an easy feat. This anime offers an excellent portrayal of the ups and downs of game development.

Aoba will struggle with many tasks, from building the best character design to working long hours to meet deadlines. Romantic Killer and New Game touch upon subjects like perfectionism and friendship. However, both series tend to focus on the latter more than the former. If you’re looking for an anime that delves heavier into video games but has a good mix of comedy and slice-of-life elements, check out New Game.

Fruits Basket is one of those retro anime that have been remade with better visuals and sound design. It’s a series that introduced older viewers to anime and manga. It’s cherished for its beautiful characters, fun humor, and emphasis on romance and drama.

Our tale follows Tooru, who becomes a guest of the Souma residence because she doesn’t want to live with her grandparents. In time, Tooru will uncover dark secrets about the Souma family that will test her kindness. Like Anzu, Tooru evokes a healing aura that affects the people around her for the better. This anime offers some supernatural elements and touches upon similar concepts like friendship.

The characters in Fruits Basket endure an array of internal and external issues that some will find relatable or heartbreaking. Fruits Basket leans more into its drama than Romantic Killer but offers some funny bits that’ll make viewers laugh. While its 2001 adaptation is fine, viewers should consider watching the 2019 remake. It has better visuals and animation that feel on par with newly released shows like Romantic Killer.

Kyoto Animation has produced multiple hits like Clannad and Miss Kobayashi’s Dragon Maid. However, The Melancholy of Haruhi Suzumiya was another work that left quite an impact when it was released. This anime contains a colorful cast who get into all types of mischief.

Like Romantic Killer, this anime touches upon the struggles and positives of high school life. It addresses practical issues most tend to face at this time, like low self-esteem and bullying. Fans who’ve been a part of quirky clubs will identify with Haruhi Suzumiya and her friends’ activities.

If fans enjoy Anzu’s energetic personality, they’re in for a similar thrill ride with Haruhi’s character. Haruhi’s dynamic with Kyon also captures the same energy as Anzu and Tsukasa’s. Like Tsukasa, Kyon’s life will become more exhilarating and memorable once he meets Haruhi.

From high-school shenanigans to a series drenched in mystery and thrills, we arrive at Erased. This anime gives viewers a fun murder mystery plot to solve. While the series offers some romantic sub-plots, it leans more toward the mystery side and doesn’t provide much comedy.

However, Erased isn’t too far off from Romantic Killer. Despite being a comedic show, Romantic Killer wasn’t afraid to touch upon serious issues involving sexual assault and stalkers. Despite its cutesy art style, Erased is another show that isn’t afraid to feature mature topics. Some subjects include child abduction, abuse, and murder.

Erased offers some fun slice-of-life moments. Its cast does participate in outdoor and indoor activities sometimes. Furthermore, if you were touched by scenes where Anzu stood up for Junta and Tsukasa, then you’re in for a treat with the overabundance of emotional imagery found in Erased; if you’re looking for a tear-jerker show with a dash of mystery, check out Erased.

Regardless of your life’s path, realizing your worth is essential. Choosing people who will help you complete your goals is also crucial. Skip Beat’s an anime that tackles this notion head-first by placing its protagonist Kyouoko in a similar situation.

Our tale follows Kyouko, whose adoration for her friend Shoutarou vanishes after she overhears him speaking ill of her. Angry, Kyouko vows to get revenge on her former friend by entering the world of showbiz. Kyouko’s endeavors aren’t too far off from Anzu’s.

Both girls go against someone that ruined their lives. Kyouko will endure situations that will force her out of her comfort zone. These situations will transform her into a better person and lead her closer to accomplishing her goal. She displays a similar “never give up” attitude as Anzu too.

Like Anzu, fans can empathize with Kyouko’s character. Shoutarou’s mistreatment of her will spike a nerve from everyone who ever felt used by a friend. At the same time, viewers will laugh at Kyouko’s many failures as she endures many scenarios humorously depicting her. If you’re looking for a romantic comedy with an entertainment industry focus, check out Skip Beat.

If there is one thing people can take away from Romantic Killer, love can lead people down the most hilarious routes possible. The anime Toradora also uses these moments to create a captivating tale about two students named Ryuuji and Taiga.

These two come from different walks of life, like Anzu and Tsukasa. However, Ryuuji and Taiga vow to help each other attain a romantic relationship with each other’s friends. Despite sharing the same motive, these two students will discover that their genuine love interest was beside them all along.

This anime wreaks comedy, drama, and romance. Toradora gradually builds the romantic tension between Ryuuji and Taiga. However, the series isn’t afraid to place these characters in embarrassing and humorous circumstances to get a laugh out of its viewers. This is phenomenal anime that’ll keep fans on their toes, and one everyone should watch.

In Kaguya-sama Love is War, we follow Miyuki Shirogane and Kaguya Shinomiya, who are among their student body’s top representatives. Despite already having feelings for each other, Miyuki and Kaguya can’t agree to a relationship. In their minds, the other students would look down on them if they confessed their love for each other.

Like Anzu, Kaguya and Miyuki have a vendetta against romance despite their initial feelings. Romantic Killer fans will be intrigued by this similar sense of secrecy in Kaguya-sama Love is War. Furthermore, this series touches upon hard-hitting topics like grief.

Fans that enjoyed seeing Tsukasa and Anzu’s interactions with each other will adore the rivalry between Miyuki and Kaguya. These characters also get into mischievous scenarios inside and outside their school setting. If you’re looking for another funny and heartwarming show about romance with a bit more drama, check out Kaguya-sama Love is War.

So there we have it, our 10 anime/TV show alternatives to watch when you’ve completed Romantic Killer!