Chase Away Your Blues With These Picks

Our Blues is the latest melodramatic K-Drama on Netflix, revolving around a group of people living on Jeju Island. Through the 20 episodes, we see numerous different romances and drama.

So without further ado, we present 10 TV shows that should whet the appetite when you’ve finished streaming Our Blues!

Hometown Cha Cha Cha is a light, breezy k-drama; a show rife with romance, comedy and light bites of drama. It’s the perfect small town weekend treat and an undeniably fun watch from start to finish.

The main premise is pretty straightforward and revolves around a woman named Hye-Jin. She’s a dentist from Seoul, but a series of unfortunate events see her wind up in the small seaside town of Gongjin. Once there, she immediately finds herself an outsider and struggles to fit in. When she decides to open a dentistry, it only exacerbates issues. Step forward “Chief Hong” Du-Sik.

Du-Sik is a handsome and suave man who’s officially unemployed but undeniably a busy man. He helps out all the different residents and gives Hye-Jin some sound advice. As one may expect, the duo start to grow closer together and across the episodes each grow and evolve over time.

Like a warm cup of hot chocolate on a cold winter’s night, Hometown Cha Cha Cha will warm you right the way down to your core. This one’s a must-watch folks!

You can read our thoughts on Hometown Cha Cha Cha in our full season review here!

Written by the same man responsible for Prison Playbook and Hospital Playlist, Racket Boys is a light, breezy drama that combines slice of life shenanigans with sport drama. It’s a delightful 16 episode drama, with lots of characters and a positive, uplifting message at its core.

In its simplest form, this is a show about underdogs finding their place in this world and doing so through comradeship and playing badminton. Our tale revolves around a middle school in Haenam.

However, the badminton team there is on the verge of disbandment. Three players remain – Yoon-Dam, Woo-Chan and Yong-Tae. When Hyun-Jong’s son, Hae-Kang, joins their ranks, they work together to try and make it big.

With separate female badminton players trying to succeed too, Racket Boys’ large ensemble is helped by a long run-time and plenty of romance, drama and comedy to boot.

You can read our thoughts on Racket Boys in our episode recaps here!

Her Private Life is a fun and vibrant romcom, although it’s also riddled with clichés and tropes from the genre. Still, it makes for a really fun watch nonetheless.

The story centers on Sung Deok-Mi, who lives for her work as an art gallery curator. She’s exceptional and perfect…but for a dark secret. She’s the ultimate Cha Shi An fangirl. In fact, she’s even the manager of a Shi An fan-site!

With no other man standing a chance next to such a god-like specimen, in saunters Ryan Gold, the art gallery’s new director. A once famous painter, he uncovers Deok-Mi’s secret and everything changes.

Well written and packed full of great moments, Her Private Life perhaps should have ended after 14 episodes but it’s good value for its runtime nonetheless.

Because This is My First Life

Because This Is My First Life is another solid K-drama offering, one that perhaps will be polarizing for those expecting a straightforward ending.

The story revolves around a house-poor man, Nam Se-Hee, and a homeless woman, Yoon Ji-Ho, who become housemates to try and help ease their suffering. In doing so, the pair find themselves agreeing to a contract marriage. Of course, these two are pretty dysfunctional and all does not go to plan.

The series has some solid themes revolving around marriage and what it means to love someone, although it does so in rather controversial ways at times. Nevertheless, this one is certainly similar to Our Blues.

When the Weather Is Fine

When the Weather is Fine is a slow drama. And when we say slow, we absolutely mean slow. This one is almost borderline meandering at times as the drama tells its story.

Blending themes of forgiveness, healing and love, When the Weather Is Fine takes places in the middle of the countryside. Occupying this town happens to be a woman called Hae-Won, a former cello player who moves there after being disappointed and disheartened over events in her life.

When she moves back to Bookhyun Village, her hometown, she meets Eun Seob, who happens to be run a bookshop called “Goodnight Bookstore.” A simple man with a simple life; Eun-Seob soon becomes entangled with Hae-Won as the pair start an unlikely bond.

If you can go in with some patience with this one, you’re bound to find a lot to like with this!

Lovestruck in the City

Lovestruck In The City is an interesting experiment that doesn’t always work as well as it should. In its simplest form, this 17 episode long Korean drama takes numerous face to face interviews and attempts to blend this documentarian formant with a more conventional, messy set of love stories. The result is an uneven and turbulent rollercoaster, one that has as many high notes as lulls.

The story here is essentially split into three different relationships at various stages of their lifespan. This story does eventually crescendo into a decent pay-off, but the ride to get there is certainly a mixed bag of feelings.

You can read our thoughts on Lovestruck in the City in our full season review here!

Highly regarded as one of the best slice of life Korean dramas, Reply 1988 is a real trip down memory lane – and perfect to wash down the bitter trip that is Penthouse. Nestling itself in nicely alongside other dramas of its kind, Reply 1988 adopts a light, breezy tone but finds strength in its characters who are all well written and have lots of dramatic moments.

Split across four different families and praised as one of the more accurate depictions of Korean life, this 20 episode series is split into feature-length episodes as we follow a dozen or so characters from 1988 up to 1994. There’s a blend of romance, comedy and drama here too, meaning fans of slice of life dramas should love this one.

You can read our thoughts on Reply 1988 in our full season review here!

Do Do Sol Sol La La Sol is a romantic comedy with touches of slice of life and healing themes integrated. It’s often funny, full of heartwarming and heartbreaking segments and topped off with a lovable, memorable cast of characters.

Fronting the lines are Go Ara and Lee Jae-Wook who portray Ra-Ra and Joon respectively. The former is a rich princess with everything she could ever ask for. After her groom runs out at the altar and her Father suffers a tragedy, Ra-Ra descends down a slippery slope to bankruptcy with nothing but her lovable dog Mimi to her name.

Unsure where else to turn, Ra-Ra packs up her things – and Mimi – and heads off for Eunpo where her secret admirer happens to live. Unfortunately, on the way she hits a boy on a bike called Joon who topples over. That same boy happened to be a runner at Ra-Ra’s botched wedding who tried to help her.

Whether it be the various colourful residents of Eunpo or the different antagonists that crop up across the 16 episodes, Do Do Sol Sol is wonderfully written for the most part and does an exceptional job bringing to life some of the most memorable characters from any comedic Korean drama this year.

If you can go into this one with a bit of an open mind and expect a polarizing ending from the off, Do Do Sol Sol is well worth checking out.

You can read our thoughts on Do Do Sol Sol La La Sol in our full season review here! 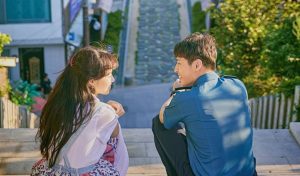 When the Camellia Blooms

After a bit of a shaky start, When the Camellia Blooms really grows from strength to strength over the chapters, with the story starting in Onsang as we see single mother Dongbaek arriving with her baby boy to open a bar, The Camellia.

Struggling to fit in, she faces many challenges over the years mostly revolving around raising her child and running a business. When local police officer Hwang-Yong-Sik falls deeply in love with her, he does everything in his power to win her over.

To complicate matters, Dongbaek’s ex-boyfriend, and famous baseball player, Kang Jung-Ryeol appears back on the scene, while a serial killer called the Joker threatens the peace of the community.

One of the strongest selling points of When the Camellia Blooms comes from its story and loveable characters. While the narrative is quite simple, the blending of different genres makes this one so enjoyable and easy to watch.

You can read our thoughts on When The Camellia Blooms in our full season review here!

Something In The Rain

Something In The Rain is going to be an acquired taste but for those after a simple but effective romance, this one’s definitely worth having a look at.

The story revolves around Yoon Jin-Ah, a woman in her mid-30’s who doesn’t know what it’s like to date a man. She’s been dumped numerous times because of her reckless and foolish behaviour. When her latest boyfriend dumps her for being bland, she’s out of luck – and options.

Step forward Joon-Hee, who shows up and changes her life. Now, Joon-Hee happens to be Jin-Ah’s childhood best friend’s younger brother, and he actually used to live next door to him. But will Jin-Ha fall in love? And if so, will she stay with him?

The show is certainly a slow-burn but it also takes its time building up the melodrama, with culturally complex and interesting families on both sides. If you’re after a simple but engrossing romance, Something In The Rain is definitely worth a watch.

So there we have it, our 10 TV show alternatives to watch when you’re finished with Our Blues on Netflix.