Another Dive Into Dark, Criminal Enterprises

Narcos: Mexico serves as the sister spin-off to Narcos. It was originally intended to be a tagged-on season to the main series but given its popularity, ended up as a brand new original IP for Netflix. It’s well written, full of memorable characters and armed with a really gripping main plot.

If you’ve finished watching this one and are looking for more of the same, fret not! We’ve combed through the archives and saved you the hassle of having to try and find something similar with our top 10 picks for alternate viewing.

So without further ado, we present 10 TV shows that should whet the appetite when you’ve finished streaming Narcos: Mexico.

Gripping, thrilling and soaked in dramatic tension, Ozark is a well-paced show that proves to be another home run for Netflix Originals.

The story here revolves around a family who find their lives turned upside down by their father, Marty, who happens to be a financial advisor. Only, he’s also one of the top money launderers to the second largest drug cartel in Mexico.

When things inevitably go awry, the family are forced to uproot from their cushy lifestyle and move to Missouri, Ozarks.

With three seasons already out and a fourth on the horizon, Ozark is definitely one of the better crime dramas out there and well worth watching.

Any fans of Narcos or Gomorrah will be right in their element with Amazon Prime’s original series. ZeroZeroZero revolves around a cocaine shipment making its way to Europe, beginning with a cartel of Italian criminals who decide to buy it. From here, the series expands and grows over time as this shipment hops across the Atlantic Ocean.

To give much more away would be a disservice to this one. Gritty, well-written and full of some really well choreographed action, this is another must-watch show and a surprisingly underrated one too.

Romanzo Criminale is a gritty look at the underbelly of a criminal enterprise in Italy – and a very good series in its own right.

At the centre of all this lies small criminal Lebanese, who comes armed with a big dream. He wants to conquer the underworld of Rome and in order to do that, he puts together a highly organized gang to take the streets by storm. What ensues is a blood-soaked mission to try and crown the throne for himself.

With an accurate depiction of the time period and a story spanning a total of 25 years (between the 70’s and the 90’s), this dark historical drama is certainly worth checking out.

Although there are snippets of empathy felt toward this notorious man, for the most part El Chapo’s narrative does a great job depicting this despicable, cunning drug kingpin as a criminal he is rather than a hero.

The show begins with Chapo’s rise to power and ends with his eventual downfall. Along the way though, this series blends elements of a political thriller with a more straight forward action-drama hybrid.

With a satisfying conclusion and plenty of drama along the way,  El Chapo is a solid option.

You can read our thoughts on El Chapo in our full season reviews here!

It’s perhaps unsurprising to find Narcos on this list. Much like Narcos: Mexico, Narcos dives deep into the drug trade and follows the infamous Colombian drug lord Pablo Escobar. This series plays out like a cat and mouse chase, with the DEA and federal agents working hard to try and track down and stop Escobar from growing his business.

As the seasons tick by, the attention does turn slightly away from Escobar toward other criminals, especially in season 3.

Still, for the most part this series bears a lot of similarities to Narcos: Mexico which is perhaps unsurprising. Still, this show is a must-watch.

The story essentially revolves around an Atlantic City politician who plays both sides of the law by conspiring with gangsters.

Set during the Prohibition era, this moody, gritty drama perfectly captures the 1920’s time period. With five seasons to get through and lots of twists and turns along the way, you’ll be hard-pressed to find a better depiction of mobsters than this gem of a show.

Raw, dramatic and surprisingly realistic, if you’re looking for some crime action set in 1920’s England, Peaky Blinders is just what the doctor ordered.

This BBC drama revolves around a family determined to make it to the top of the criminal underworld. At the heart of this is Tommy Shelby, who – along with brother Arthur and Aunt Polly, find themselves tackling an array of problems both internal and external.

Peaky Blinders really excels in its grimy, dark depiction of Birmingham. There’s plenty of twists and turns along the way too and with 5+ seasons to get through, there’s certainly a fair amount to get through.

You can read our thoughts on Peaky Blinders in our full season reviews here! 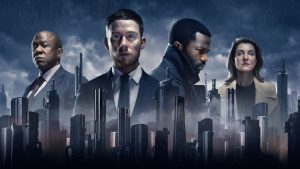 Gomorrah is an Italian crime drama revolving around the Mafia in Naples. Running for four seasons, Gomorrah has a lot of action set pieces, which are backed up by some amazing storytelling and tense segments along the way.

The story revolves around a man named Ciro who disregards tradition in his attempt to become the next boss of his crime syndicate. Of course, these internal problems cause a rift to open in the family, putting all of them at risk.

This series doesn’t look like running out of steam anytime soon, especially with a new season already green-lit, and is certainly worth indulging in.

Breaking Bad manages to transcend beyond excellent TV into something timelessly epic on the small screen. From the tight writing and memorable characters to the constant juxtapositions and changing character fortunes, this slow-burn thriller is a non-stop rollercoaster ride from start to finish.

There’s a reason this is regarded as one of the best shows ever produced, and if you haven’t seen it, do yourself a favour and check it out.

If you want an example of how to turn a character from a beloved icon to something very different indeed, this is a solid choice and its accurate depiction of the drug trade makes it a must-watch.

You can read our thoughts on Breaking Bad in our full season reviews here!

So there we have it, our 10 TV show alternatives to watch when you’re finished with Narcos: Mexico on Netflix.