Nana is an incredible anime that blends romance, fashion, and music well. It gives viewers a tale about two girls named Nana who desire a taste of the good life. One seeks romance while the other requires popularity in the music industry. Our two will eventually cross paths and form a beautiful friendship that’s worth your time. This is a great series that identifies challenges concerning maintaining healthy relationships and goals.

Fear not if you’re having trouble finding anime similar to Nana! We’ve discovered 10 alternate shows that’ll give you a similar experience as Nana.

So without further ado, we present 10 TV shows that should whet your appetite when you’ve finished streaming Nana! Beck: Mongolian Chop Squad features a likable cast, a gritting setting, and a compelling storyline. It follows Koyuki, a boy who seeks to find his life’s purpose. An answer comes rushing toward him when he saves a dog named Beck from a group of obnoxious bullies. He meets the dog’s owner Ray and learns that he’s an emerging guitarist of a well-acclaimed rock band.

They travel to Ray’s hideout and he dazzles Koyuki with his great guitar skills. This influences Koyuki to pick up the guitar and join Ray’s band in hopes of making it the best band ever. Along with his crew, the two plan to rock the world as the new band BECK. This anime fantastically leans into BECK’s struggles to achieve worldwide fame from failed cooperation to meeting quotas.

For those looking for an anime with great drama and musical emphasis, give this one a watch.

Paradise Kiss is a fabulous fashion anime with a neat aesthetic. Its dramatic elements will remind many folks of soap operas that they’d often encounter when flipping through television channels. With its unique art style and fun characters, you’re in for a refreshing experience with this anime.

In it, our protagonist Yukari Hayasaka is running away from a creepy man. She bumps into a beautiful purple-haired woman and faints. Upon waking up, Yukari discovers she’s in a strange place called Atelier and meets the same person from before. Yukari learns that the people in Atelier are fashion designers from nearby art schools.

She denies their offer to be their model. However, she returns to Atelier to retrieve her school ID and gets coerced by the head designer George Koizumi to become their model. Therefore, we follow Yukari’s endeavors with the Atelier students. Like Nana, Paradise Kiss seems heavily directed toward a young girl demographic.

However, both shows can be enjoyed by everyone because they delve into themes concerning rebellion, young love, and societal pressures. If you’re into dramatic series with gothic art styles, give Paradise Kiss a shot.

Kids On The Slope is a remarkable coming-of-age tale that emphasizes music and romance. It tackles common issues regarding friendship and love in wonderful ways. You’ll walk away from this show feeling satisfied and entertained. Our tale revolves around the friendship between a boy named Kaoru and a fabulous jazz musician named Sentarou.

The friendship transforms into a partnership and leads to Sentarou and Kaoru forming a band. We follow the two’s journey in making people smile with their fabulous music playing. It takes a few episodes for the ball to start rolling in this show. It chooses to flesh out its characters before diving into anything dramatic.

Kids On The Slope excellently builds upon Kaoru and Sentarou’s relationship well. Nothing feels forced as you enjoy the authentic journey these two men endure achieving a loving friendship. Music is at the heart of Kids On The Slope’s narrative like Nana and is used to help our characters’ bond grow.

Thankfully, the show does pick up near the middle and leads into something grander. Fans will enjoy the chemistry between Kaoru and his bandmates. Their love for playing music will feel semi-infectious and may inspire some to pick up and learn an instrument themselves. 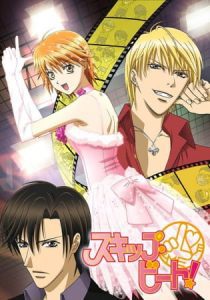 Self-worth plays an important factor in helping people move forward in life. Choosing the right person who’ll help you achieve your goals in the long term is equally crucial. Skip Beat’s a series that tackles that notion with full integrity. It follows Kyouko, a girl who doesn’t want anything to do with her friend Shoutarou after overhearing him gossip about her.

Frustrated, Kyouko plans to get revenge on Shoutarou for his crude behavior by entering the showbiz world. Skip Beat feels slightly more comical than Nana though. Fans will find Kyouko’s inability to adjust to the celebrity standards of living amusing but will grow fond of how much she’ll develop by the series’s conclusion.

Skip Beat also leans into acting than music. If you’re looking for something that’s less dramatic and more hilarious in scale, check out Skip Beat.

Carole & Tuesday is an impressive music-themed show delivered by the man who brought you Cowboy Bebop. This one revolves around music but maintains the same sci-like setting fans enjoyed in Bebop. Nonetheless, its characters’ love for music and their evergrowing bond will pique many Nana fans’ interest.

This anime is set in the future where humanity inhabits Mars and lives alongside AI companions. Our protagonist Carole lives deep within Alba City (a location on Mars). She’s a hard worker by day and an excellent keyboardist by night. On the other hand, the show’s secondary protagonist Tuesday has lived a rough life and aims to pursue music.

The girls meet and aim to perform together. Unfortunately, no one cares about human-made entertainment. Therefore, Carole and Tuesday vow to restore humanity’s love for old-fashioned music playing and challenge the technological advancements made in their homeland. This is another series where two girls seek freedom by getting involved with music.

Fans looking for a music-themed anime with strong character development and themes should look no further than this one. Honey & Clover is another anime that’ll make you laugh, cry, and reflect on your current lives. It delivers a gripping narrative that’ll speak to you on an emotional level. This is an incredible youth-centric tale about love, and self-discovery, and includes a deep dive into the complex relationship between five distinct individuals.

Viewers won’t enjoy seeing them struggle but will praise our cast when they overcome the barriers standing in their way. The animation is top-notch and the characters’ designs evoke a welcoming vibe that’s too hard to ignore. The story gives viewers a wonderful balance of romance, friendship, and drama. Neither aspect overtakes the other.

With its focus on art and bonding, you’ll find yourself walking away from Honey & Clover as joyful as can be.

Bakuman is an amusing romantic comedy anime with an emphasis on art and friendship. It offers a compelling story and follows a profound protagonist named Moritaka Mashiro. He’s dreamed of becoming a fabulous manga author like his uncle. However, when tragedy strikes, he abandons his dream and spends his life studying to become a salaryman.

One day, he meets Akito, his school’s top student and an aspiring writer. Akito notices Moritaka’s drawings in his notebook and tells him they should strive for a similar dream. Moritaka accepts, only because he wants to impress a girl he has a crush on named Miho Azuki and get her to become a voice actor for his work when it becomes an anime.

Therefore, we follow the pair as they create their manga under the pen name Muto Ashirogi. They hope to become the best manga authors the world has ever seen. This is a great series that touches upon hard work and perseverance. Many aspiring story writers will find Akito and Moritaka’s journey relatable and hilarious. With a couple of gags and lighthearted moments, you’re in for a fun treat with this anime.

Clannad: After Story is a dramatic viewing experience from beginning to end. It serves as the second season to the original Clannad and amplifies the tension, romance, and heartbreak to a high extent. In it, we follow our protagonists as they endure many real-world issues involving caretaking and adulthood.

The situations they endure are relatable and will hit home with specific audiences. No one is safe from the struggle. Whether it’s the loss of a loved one or alcohol addiction, Clannad’s not afraid to shower viewers in tragic circumstances. On that note, the series’s animation and art quality see a dramatic increase with After Story.

Environments look astonishing and grim when they need to be. The soundtrack helps evoke mixed emotions from the audience and there’s an overabundance of scenery that’ll get you teary-eyed. If you’re looking for a compelling narrative that’s not afraid to pull at your heartstrings multiple times, check out Clannad: After Story.

Golden Time features offer wonderful characters, a charming storyline, and beautiful visuals. In it, we follow Banrai who suffers from amnesia after getting into a tragic accident. He loses his memories of his hometown and his past. After meeting a boy named Mitsuo, Banrai begins a new life at law school in Tokyo.

While adjusting to college, a girl named Kouko catches his attention and their meeting leads to an unforgettable year for both. He discovers that a college is a new place and a new world where he can get into all sorts of mischief. The path he chooses leads him to a life that he’ll always remember.

Both anime delve into topics regarding trust and betrayal. Viewers will love seeing how our characters’ relationship blossoms into something truly heartwarming by the show’s conclusion. If you’re looking for another fun romance anime with more comedic antics, check out Golden Time. Chihayafuru isn’t your typical sports anime. This story is full of competitiveness, charm, and mischief. Despite having a sports focus, this anime isn’t afraid to delve into the deep companionships between its protagonists and other cast members. This story follows Chihaya, a girl who dreamed of seeing her sister Chitose become a successful model.

After defending her classmate Ara from his bully, Chihaya gets involved in the world of competitive Karuta play. Her new attachment to the sport encourages her to join the Shrianami Society. With the dream of becoming the next Queen of Karuta in her head, Chihaya must defeat many strong competitors who stand in her way.

Chihaya is a strong female protagonist with redeeming and lovable qualities. Despite the endless challenges that interfere with her dreams, she’s determined to tackle each situation with high confidence. She displays a similar never-give-up attitude as one of the Nana characters. Many will find Chihaya motivational to some extent as her journey will influence many people to pursue their wildest imaginations. If you’re looking for a fun sports anime with an incredible female protagonist, give Chihayafuru a shot.

So there we have it, our 10 anime/TV show alternatives to watch when you’ve caught up with Nana!