Love Alarm is the latest Netflix sci-fi drama and after a two year hiatus, the second season has just dropped! If you’ve finished that and are wondering what to watch next – fret not!

We’ve combed through the archives and saved you the hassle with our top 10 picks for alternate viewing.

So without further ado, we present 10 TV shows that should whet the appetite when you’ve finished streaming Love Alarm.

Boys Over Flowers is a pretty cliched K-drama but it follows up those clichés with a neat story about class and culture. Even the title of the drama, a play on the adage of valuing materialistic wealth over the beauty in life, feeds into the main premise of the story.

Regardless of its simplicity and tropes, there’s no denying the popularity and love many people have for this drama. Interestingly, this Korean remake of the Japanese series with the same name, catapulted a lot of its stars into the limelight.

Over the years, Boys Over Flowers has definitely picked up steam internationally and despite releasing in 2009, remains one of those “classic” dramas to check out. The real talking point here though comes from the way this drama tackles bullying and manages to hone in on each of the different characters and flesh them out in the process.

This is easily the strongest part of the drama and it makes Boys Over Flowers a memorable enough Korean drama to land a spot on this list.

Heartwarming, amusing and chock full of drama, My First First Love is everything you’d expect a Korean Drama to be. Despite getting off to a bit of a rocky start, the show soon eases into its romantic story, stacking up layers of drama and comedy with each passing episode. At the heart of this one are two lifelong friends, Song-I and Tae-O who are joined by a host of colourful characters as they embark on a journey into the world of romance and friendship.

The story itself begins with Tae-O inheriting his Grandfather’s house. After several years have passed, the 22 year old realizes living alone isn’t all it’s cracked up to be. After an opening episode used to establish the main characters of the show, the rest of the series see all the characters converging together at Tae-O’s house, slowly growing closer together whilst love triangles, secrets and close friendships blossom between them all. A

With two seasons and lots of ensuing drama across that time, My First First Love has some great moments well worth checking out.

You can read our thoughts on My First First Love in our full season review here!

Romance Is a Bonus Book

Romance Is A Bonus Book is armed with a great message – live your life to the fullest. In the wake of this important life lesson is a story full of sweet romance and some nice plot beats. Unfortunately it’s also a show that runs out of steam long before its 16 episode run-time, ending with a whimper rather than a roar.

At the heart of this is Cha Eun Ho, a successful and handsome writer who just so happens to be the youngest chief editor at a publishing company. He soon becomes involved in the life of his childhood friend, Kang Dan Yi, who was once a popular copywriter.

One thing leads to another and Dan-Yi eventually starts working at the same building as Eun-Ho. This inevitably leads to a love story unfolding. It’s not perfect but good acting and a sweet tone is enough to justify its inclusion on this list. 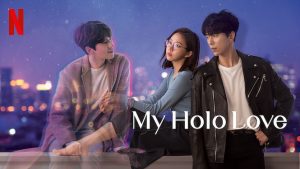 As we rely on computers more and more, giving them our information and details, the idea of an AI taking human form wielding this sort of power is certainly quite alarming.

Meshing this idea into a love triangle, My Holo Love is the latest Korean drama to blend sci-fi with a romance. Can robots ever have feelings and would they be able to experience pain and love? This is definitely an interesting subject, and one that’s explored in more detail during the 12 episodes of this series.

The story revolves around lonely So-Hyeon who suffers from face blindness; a condition that stops her from being able to recognize faces. She lives a sheltered life and as a result of her condition, is unable to make deep connections with the people around her.

One day, she accidentally becomes the owner or beta tester of a new AI called Holo, which she’s able to see thanks to smart glasses. Holo was created by the elusive Nan-Do who has also been through some traumatic events. This sets up the premise of the show and from here we follow both our protagonists as they learn more about themselves, thanks to Holo who claims to have developed human feelings.

While more of a romance than an outright sci-fi flick, this Netflix series should whet the appetite for anyone who enjoyed Love Alarm.

You can read our thoughts on My Holo Love in our full season review here!

Memories of the Alhambra 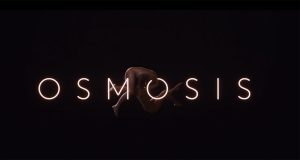 A revolutionary new technology is developed by a company called Osmosis. Through an implant and a handy AI assistant, this piece of tech takes the guesswork out of love and let’s you see your soul mate in your mind’s eye.

The main story sees brother and sister, Paul and Esther, fronting the company and taking on 12 candidates to test the implant before it’s released to the general public.

As the board work to remove Paul from his position and Esther conducts her own secret agenda with her Mum, the story branches in two, with an equal focus on the test candidates and the ones in charge.

In our ever-digitalised world, The Feed is a frightening concept and shares a lot of similarities with Black Mirror’s “The Entire History Of You”. Here, we arrive at a time in our future where everyone is connected to The Feed, a device that allows all thoughts, feelings, emotions and senses to be shared with one another, all through a handy implant which connects to a worldwide Cloud.

At the centre of this near-future world is the dysfunctional Hatfield family. When they learn of a hack within the infrastructure of The Feed, this family reluctantly team up together to try and get to the bottom of what’s happened.

The characters inhabiting this world may not be quite as endearing as one may expect, but the story is rife with tension and thought provoking questions surrounding the danger of our ever-digitalised world.

As we become more and more engrossed in social media and our online personas, The Feed is a humbling shockwave back to reality and a cautionary tale well worth checking out.

You can read our thoughts on The Feed in our full season review here!

True Beauty is a perfectly enjoyable Korean drama. It’s a cuddly, warmhearted k-drama romp, with enough laughs, romance and drama to keep you hooked until the end. Unfortunately, it’s also a show riddled with clichés and tropes, taking what worked so well in Extraordinary You (the Director’s previous work) and attempting to rekindle that here – but not quite as effectively.

Adapted from the web comic Yeoshingangrim, True Beauty centers on a high school girl called Ju-Kyung. Bullied for her ugly looks and forced out of school, Ju-Kyung eventually stumbles upon make-up tutorials online and manages to transform her looks overnight.

Armed with a prettier face and a confident attitude, Ju-Kyung enlists at a new school where she winds up involved in a love triangle with bad-boy Seo-Joon and kind-hearted but quiet Soo-Ho.

Despite a few wobbles along the way, True Beauty rounds things out with a perfectly enjoyable finale that wraps everything up with a neat little bow at the end. While the show certainly won’t win any awards, it does have a light, fuzzy tone and enough laughs along the way to recommend. This sweet Korean drama should appease fans looking for a light romcom.

You can read our thoughts on True Beauty in our full season review here!

Something in the Rain

Slow paced and incredibly romantic, Something in the Rain will undoubtedly have grown in popularity since Ye-Jin’s role in Crash Landing On You. Well, this drama sees Ye-Jin play the role of Yoon Jin-A, a single woman in her 30’s. She works as a supervisor at a coffee company and is generally an easy-going person. Only, she feels empty and incomplete inside.

Step forward Seo Joon-Hee. Serving as the younger brother of Jin-A’s best friend Kyung-Sun, Joon-Hee returns to South Korea after finishing work abroad. He’s very different from the guy she remembered all those years ago. Will romance blossom between the two?

The answer to that should, of course, be obvious to anyone who watches a lot of Korean drama. It is a little simplistic – perhaps to a fault – but undoubtedly has a really compelling romantic core to it.

Dream High is a clever and well written K-drama that plays on the idea of dreaming high and aspiring to be the best. Specifically, it’s a high school drama that follows the lives of different students as they try to become superstars.

The different characters all come from different walks of life, with lots of ensuing pockets of drama and little conflicts that rise up across the run-time. One look at the cast will tell you all you need to know about this ensemble, which is absolutely packed with talent. From IU and Bae Suzy through to Lee Hye-Sook and Kim Soo-Hyun, this show backs up its cast with a really well worked storyline.

If you’re in the mood for a good old fashioned high school drama, this one is definitely worth checking out.

So there we have it, our 10 TV show alternatives to watch when you’re finished with Love Alarm on Netflix.