Wind Down With Other Shows!

Cozy, heartwarming, and exciting are three emotions you’ll have while watching K-On. This slice of life and music-themed anime will warm anyone’s day. From its relatable characters and environment to its enjoyable humor, K-On is a bundle of joy that’s sure to make you smile. Our story takes place during a school club fair and follows a girl name Yu Hirasawa.

Yu signs up for her school’s Light Music Club, despite not knowing how to play an instrument. Realizing this harsh truth, Yu abandons her admission. It isn’t until Yu hears and sees the Light Music Club playing a catchy song that she decides to join the club. Therefore, the anime explores Yu’s daily activities and shenanigans with her new companions.

If you’re having trouble finding anime similar to K-On, fear not! We’ve discovered 10 alternate shows that’ll give you a similar experience as K-On.

So without further ado, we present 10 TV shows that should whet your appetite when you’ve finished streaming K-On!

K-On and Love-Live! School Idol Project (Love-Live) is a remarkable slice of anime with an emphasis on music and friendship. Love-Live’s cast is full of life and all have distinct attributes, mannerisms, and skills that help them stand out.

There’s also a wide variety of music shared in this show, to get fans more immersed in its world. As with any music-themed show, you can expect our girls to strut their stuff through dancing, singing, and playing instruments. These musical routines are accompanied by beautiful animation and visuals.

Fans will find themselves smiling during their performances and possibly tapping to the beat of the music. From the soothing sound of the protagonists’ voices to the catchy lyrics, you’ll find yourself wanting to attend a concert in real life.

Looking for something that leans more into drama and romance? Clannad has you covered. This show is jam-packed with incredible dialogue, likable characters who undergo relatable issues, and beautiful visuals. Like K-On, the friendship and relationships that form in this show are one of its highlights.

All the characters have distinct mannerisms, personalities, and goals to help them stand out. For instance, one of its characters is treated like a brute but wants to come across as feminine while another wants to become a famed musician but lacks the skills and experience.

Fans can expect more characters like these two to crop up as Clannad continues. At the same time, Clannad utilizes its high-school setting to its advantage as K-On does. Fans can anticipate our characters to partake in various activities around their town and school to develop their bond with each other.

Therefore, Clannad is a bundle of happiness and sorrow everyone needs to watch.

Similarities – Pioneers of the Moe Sub-genre

Opposite of Clannad but similar to K-On is Lucky Star. This is a show that kick-started the Moe sub-genre like K-On by containing a full-fledged cast of child characters doing adorable things. This series leans more into comedy, though. You can expect our cast to give off hilarious facial reactions and responses to each other.

At the same time, there’s this overarching theme of friendship sprinkled throughout Lucky Star. While its two protagonists Konata and Kagami give off this rival energy at first, they learn to appreciate the other’s company. On that note, Lucky Star and K-On’s characters have similar personalities and roles in the show.

For instance, Konata displays the same lethargic mannerisms as K-On’s Ritsu and Kagami gives off the same highly intellectual and goody-two-shoes energy as K-On’s Mio. Fans can expect other Lucky Star characters to adopt similar personality traits and habits from K-On’s other cast members.

If you’re looking for another cutesy anime that leans more into the comical sides of school life, than Lucky Star’s worth watching.

Yuri Yuri falls into the same spectrum as K-On as being another anime focusing on adorable-looking girls participating in mundane activities. Like K-On, the females in this anime are part of a school club and try to find ways to keep themselves entertained.

The series provides fans with non-stop humor from hilarious facial reactions and witty jokes. The characters in this show all have likable and distinct personalities that help them stand out. Despite looking like a child-friendly show, Yuri Yuri features a degree of ecchi material that some may find off-putting or bizarre.

However, if you can look past its raunchy comedy and enjoy the show for its characters and their hilarious antics, then you’re in for a treat with Yuri Yuri.

Angel Beats is an emotional train ride that will lead you down paths of heartbreak and tension. Its characters feel relatable as they have dark past lives which will make fans depressed and teary-eyed. The scenarios our characters endure will leave a lasting impression on you.

Our tale centers around a boy named Otonashi who winds up in a dimension between life and death. He meets a group of students who call their group the Afterlife Battlefront. Their mission is to wage war against their supernatural student council president, Angel.

After Otonashi encounters Angel, he learns that she isn’t as terrible as the Battlefront makes her out to be. Therefore, the series focuses on Otonashi’s journey to reunite the two different teams while trying to solve the mystery behind this world’s strange environment.

Angel Beats and K-On feature a great blend of comedy and drama. While Angel Beats places its characters in scenarios where the viewers will find themselves bawling their eyes out, it does offer some lighthearted humor and fun. 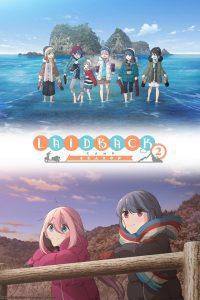 Are you searching for an anime where you can unwind and take in its atmosphere, Laid Back Camp might be what you’re after. This anime spends a great deal of time fleshing out its all-female cast during their charming camping adventure. It lacks complexity but makes up for it with wholesome activity.

Its characters like Rin make this anime a worthwhile experience. Her chemistry with the other characters is charming to see unfold on screen. You can expect her and her friends to indulge in many relatable activities from sharing tales to getting warmed up next to a bonfire.

This is the type of anime you’d want to put on when you need a break from exercising, working, and engaging in any action-centric or mind-numbing content. If you enjoyed following the silly antics Yu and the others in K-On experienced in that show, give Laid Back Camp a shot.

This is an anime that blends romance, friendship, and music well. Several people can empathize with and relate to the situations our cast is placed in. From intense arguments to struggling to meet peers’ expectations, this show may leave fans feeling stressed or somewhat attacked.

At the same time, Hibike! Euphonium offers an emotionally-driven storyline that’s sure to kick-start anyone’s waterworks. The story follows Kumiko, who wants a better high school experience and avoids anything that will remind her of middle school.

All that wishful thinking comes crashing down when she’s forced to become a euphonium player for her high school band. At the same time, she must deal with the complications that come from her former friend Reina. Faced with these dilemmas is a narrative about a girl who must reignite her passion for music to protect her school’s legacy.

K-On and Hibike! Euphonium spends time building upon characters’ relationships with one another. Kumiko’s character develops her social and musical skills gradually as the series progresses. This is a stellar series about bringing people together in fun ways. If you’re looking for a more dramatic and romantic take on K-On, Hibike! Euphonium’s worth a watch. Tamako Market centers around Tamako, the daughter of famous mochi bakers who own a shop called Tama-ya. She meets a talking bird who is on the hunt for a bride for his country’s prince. He visits Tamako’s home and gets addicted to her family’s mochi.

He later becomes the family’s mascot because of how much weight he packs on from the food. At the same time, one of Tamako’s friends, Ooji, spies on her from afar as he’s scared to share his true feeling for her. On top of that, their fathers are fierce mochi rivals.

This is a cozy anime about a boy having a tough time declaring his love for the female protagonist. Tamako Market and K-On deliver similar relaxing and joyful vibes. These shows utilize their cutesy character designs to convey their lighthearted angles and themes effectively.

Friendship and endless mishaps await you in Tamako Market.

A Place Further Than The Universe

In A Place Further Than The Universe, we follow Mari, who can’t stop thinking of what lies beyond the reaches of her world. Despite her curiosity, Mari’s anxiety holds her back from pursuing the said dream. It isn’t until she reaches her second year of high school, that Mari starts pursuing her goals.

Eventually, she’ll interact with Shirase, who is on a quest to Antarctica to discover her missing mother’s whereabouts. With the help of two other girls from different backgrounds, the four venture out into the frozen south, searching for Shirase’s mother.

The characters in A Place Further Than The Universe are more goal-centric than K-On’s cast. However, their chemistry is on par with Yu’s group. This show places multiple hurdles for the cast to overcome. After defeating these challenges, our characters walk away stronger as individuals and as a team.

From a goal-centric cast to a group of individuals who just want to have fun, we arrive at Azumanga Daioh: The Animation. This is an anime where fans can relax and turn their brains off. This anime doesn’t provide any complex storytelling or exposition-heavy dialogue.

Instead, viewers will be bombarded by numerous jokes and gags that will make them laugh. Everything from its slapstick humor to one-off jokes is well-timed. The types of humor you can anticipate from this show range from terrible drivers to characters’ faces turning red when they’re embarrassed or spooked.

It’s these silly touches that make Azumanga Daioh an underappreciated but worthwhile gem. Hilarity aside, Azumanga Daioh’s cast indulges in many school-like activities similar to Yu’s group in K-On. From participating in events to chatting about mundane occurrences in their lives, this show offers a relatable group of likable female characters.

If you’re in desperate need of a show that will make you feel warm and happy inside, give Azumanga Daioh a chance.

So there we have it, our 10 anime/TV show alternatives to watch when you’ve caught up with K-On!