Aspiring Businesses To Check Out

Have you finished streaming Itaewon Class? Wondering what to watch next?

So without further ado, we present 10 TV shows that should whet the appetite when you’ve finished streaming Itaewon Class.

With lots of flawed characters throughout, Extracurricular offers a slightly different flavour of spice to this teen drama genre, one that increases in pacing and tension across the episodes.

The story itself revolves around Ji-Soo, a model student in the eyes of teachers and other students. He keeps his head down, has no friends and spends most of his days acing exams and staying invisible.

Under this façade however is a darker side to Ji-Soo’s persona which is revealed in the first episode and continues to snowball as his tight-knit operation goes horribly wrong.

Well written and engrossing, this one’s definitely worth watching – and also on Netflix too.

You can read our thoughts on Extracurricular in our full season review here!

Much like the American film Moneyball, Stove League is a show that hones in on what makes the business-side of baseball so fascinating, delivering a really clever, character-driven drama in the process.

At the heart of this story lies a team called ‘Dreams’ who are in complete disarray. Power struggles and bickering in the board-room divide the team. There’s a hierarchy at work too and a megalomaniac star player to boot. Unfortunately, it’s all up to promising manager Seung-Soo to try and change their fate.

With right-hand woman Se-Young by his side, the drama combines a serialized approach to its overarching plot, as episodic chapters sprinkled in helps learn more about the different players.

You can read our thoughts on Hot Stove League in our season review here!

If you’re looking for something resembling Itaewon Class’ storyline, look no further than My Strange Hero. This Korean drama revolves around high school student Kang Bok Soo who’s falsely accused of committing violence and kicked out of school.

With a difficult upbringing, Bok-Soo remains determined to get revenge on Soo Jung and Se Ho, the two students who wronged him beforehand. Returning to the same high school as a student, the environment there has changed.

Well written and settling nicely in that feel-good rom-com genre, My Strange Hero is certainly worth checking out.

Fight for My Way

Similarities – Fighting For Your Dreams

Fight For My Way is a drama about fighting for your dreams and aspiring to great heights. In that respect, this Korean drama already draws parallels to Itaewon Class. It also captures this struggle beautifully thanks to its two lead characters, Ko Dong-Man and Choi Ae-Ra.

Dong-Man has big dreams to become a prolific UFC champion while Ae-Ra wants to become a commentator. She gave up on her dreams though, and now works at a department store.

There’s a wonderful life lesson here about following your dreams and some funny moments here too, making this a solid entry on the list.

Highly regarded as one of the best slice of life Korean dramas, Reply 1988 is a real trip down memory lane. A trip to the 80’s to be precise. Nestling itself in nicely alongside other dramas of its kind, Reply 1988 adopts a light, breezy tone but finds strength in its characters who are all well written and have lots of dramatic moments.

Split across four different families and praised as one of the more accurate depictions of Korean life, this 20 episode series is split into feature-length episodes as we follow a dozen or so characters from 1988 up to 1994. There’s a blend of romance, comedy and drama here too across its expanse season. 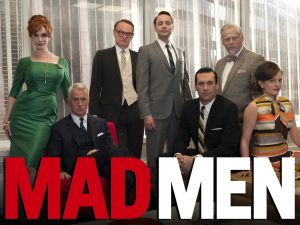 Mad Men is a drama revolving around one of New York’s most prestigious ad agencies. Set in the 1960’s, most of the story revolves around talented ad executive Donald Draper at work. This sounds like a recipe for the mundane but despite a slow start, manages to mix comedy with drama beautifully across its 7 season run.

Part period drama, part slice of life ensemble, Mad Men is a compelling and well written series – and even has a conclusive ending too making for a wholesome ride.

Similarities – Being Your Own Boss

Loosely based on the true story of Nasty Gal Founder, Sophia Amoruso, Girlboss is a funny comedy about the fashion industry.

Our protagonist is unsurprisingly a girl called Sophia, who happens to be a misfit who discovers a passion for fashion. As her business grows, Sophia has to grapple with being her own boss and all the trials and tribulations that brings with it.

It’s a simple, breezy series and with 13 episodes clocking in at around 30 minutes or so, this is a pretty quick watch compared to Itaewon Class.

If you’re looking for intense rivalries mirroring that of Sae-Ro-Yi and Dae-Hee, look no further. Billions is a Western series revolving around U.S. Attorney Chuck Rhoades. He sets his sights on the hedge fund king Bobby “Axe” Axelrod in a powerful battle between two New York figureheads.

While the later seasons lose sight of what made this initial rivalry so effective, the early couple of seasons do an excellent job showing the trials and tribulations of Wall Street trading.

Empire is a series about a hip-hop mogul forced into choosing a successor among his three sons, all of which happen to be battling for control over his multi-million dollar company. Meanwhile, his ex-wife schemes to reclaim what is hers.

It’s certainly an intriguing set-up and much like Billions, sets itself up for some decent drama to follow. Do be aware though that this is another show that loses its way toward the latter seasons. Early on, this musically charged series certainly hits all the right notes though making it worth a watch.

Similarities – Fighting For Your Dreams

Although it’s still early days for this drama, Start-Up is a Korean drama about aspiring entrepreneurs looking to set up their own businesses. It’s a show that manages to balance just enough romance and comedy with this to prevent the show slipping into full-on melodrama. At least to begin with anyway.

There’s a sibling rivalry at work, a lingering love triangle and serious second lead syndrome too. The ending is pretty subjective and in a way, makes it a tough sell to recommend but given how split the fanbase is over this one, it’s at least worth checking to see what all the fuss is about!

You can read our episode reviews for Start-Up by clicking here!

So there we have it, our 10 TV show picks to watch when you’re finished with Itaewon Class.