Solve More Mysteries In Other Shows

Detective Conan is an anime that can successfully grasp your attention with its compelling characters, intriguing mysteries, and dark atmosphere. While its promotional material pictures it as a heartwarming narrative, this show doesn’t shy away from placing its protagonist in horrendous situations.

This anime follows the daily adventures of Edogawa Conan, formerly known as Shinichi Kudo, who had been drugged by the mysterious Black Organization one night. This drug didn’t kill him but transformed him into a toddler. Faced with many mysteries, it’s up to Conan must help his childhood friend’s father, Kogorou, solve many crimes while investigating the whereabouts of this mysterious criminal organization.

Fear not if you’re having trouble finding anime similar to Detective Conan! We’ve discovered 10 alternate shows that’ll give you a similar experience as Detective Conan.

So without further ado, we present 10 TV shows that should whet your appetite when you’ve finished streaming Detective Conan!

Death Note is one of the best supernatural detective anime of all time. This anime features well-written characters, an engaging overarching plot, and a gloomy world. This anime will keep you on the edge of your seats and keep you guessing what will occur between its protagonist Light Yagami and his rival L Lawliet.

This anime follows Light Yagami, a high school student who wants to rid the world of all criminals to maintain peace. One day he stumbles upon a mysterious notebook called the Death Note, which allows its holder to murder anyone they desire if they write their full name in it. After murdering a few evildoers, meeting the book’s creator, Ryuk, and establishing the alias, Kira, everything seems to bode well for Light.

However, his days of murdering criminals are thwarted by a mysterious young detective named L. Therefore, the series follows the brutal and cunning mind games between L and Light, as the former attempts to bring Kira to justice. If you enjoyed Detective Conan’s chilling murder mysteries, then you’ll get a kick out of the dark atmosphere and mind games found in Death Note.

Monster is one of Naoki Urasawa’s best creations. Like Detective Conan, this anime is a bit slower-paced. However, Monster utilizes its slower pacing to tell incredible sub-plots, build upon its overarching mystery, and establish development time for its hero, Dr. Tenma, and its villain, Johan Liebert.

This anime focuses on Dr. Tenma’s shame and disgust for himself for saving Johan’s life over his town’s mayor. The reason Tenma feels this way is that Johan became a cold-hearted murderer, making Tenma realize he made a grave mistake. Aiming to redeem himself for his past error, Tenma plans to find Johan and bring him to justice.

This anime is full of non-stop mind games and suspense. These two work hand-in-hand in keeping viewers entertained and satisfied with the entire anime. While its slow-pacing and information dumps can feel overwhelming at times, its thought-provoking elements and realistically written characters will please audiences. 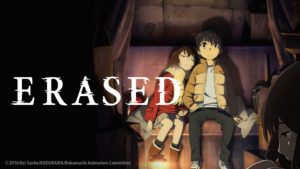 Despite Erased’s supernatural element, Erased and Detective Conan are alike in many ways. Both anime feature adult men turned into child-like protagonists who involve themselves in different mature-themed crimes. While the show depicts Erased’s Satoru and Detective Conan’s Edogawa solving numerous cases, both have overarching mysteries.

Erased’s a bit shorter than Detective Conan, though. This anime only has 12 episodes and manages to wrap up Satoru’s arc swifter. Satoru also utilizes time travel to his advantage, unlike Conan, who relies on his wit and experience. However, Erased’s does a fine job of building up its mystery while giving viewers crumbs of information to help them predict the show’s main criminal. Gosick is another mystery anime with younger characters solving crimes. Like Conan, Gosick’s protagonist Victorique de Blois goes about her day solving mysteries and getting her credit stolen by a leading male character. Gosick offers a degree of romance and light comedy, giving fans some breathing room.

This anime follows Kazuya Kujou, a student shunned for his appearance by many peers at Saint Marguerite Academy. One day Kujou visits his school’s library and stumbles upon a gold strand of hair lying on the stairs. Soon after, Kujou encounters Victorique, a highly intellectual figure capable of predicting the future.

Bound by fate, it’s up to Victorique and Kujou to solve many cases while figuring out the meaning behind their fateful encounter. This is another anime full of worthwhile cases and well-rounded characters. Fans looking for another intriguing show should give Gosick a watch.

Psycho-Pass offers a futuristic world where technology can define one’s likelihood to commit crimes and assess a person’s ideal occupation. As one can tell, this anime’s universe is more advanced than Detective Conan’s.

Fans looking for a more serious-minded psychological endeavor with a hint of beautiful visuals and action will find Psycho-Pass refreshing and interesting.

Beautiful Bones – Sakurako’s Investigation is a fun supernatural-themed crime show full of cases and crimes to solve. Our story is set amidst a fateful encounter between our protagonists Shoutarou and Sakurako. The former thought the latter was a criminal but finds out she is an Osteologist, a bone investigator.

Shoutarou accompanies Sakurako on various cases involving decomposing bodies. With the number of mysterious disappearances in their city, Shoutarou and Sakurako will tangle with a greater mystery ahead. This is a story about two unlikely partners investigating multiple crimes and tackling numerous cases involving the dead.

Like Detective Conan, our protagonists are intelligent people who can solve the most challenging cases. That said, this anime feels more lighthearted than Conan at times. There isn’t much gruesome or terrifying imagery to be found in this show. Furthermore, the cases follow a repetitive theme regarding bones and dead bodies.

The show’s pacing can be bothersome, but the anime includes some noteworthy detective-styled tropes to keep viewers entertained. If you’re into bone-themed cases as much as Sakurako, then you’re in for a fun time with this anime.

From bones to supernatural occurrences, we arrive at Un-Go. This 11-episode series features fun mysteries and cases that get darker the more you progress through its narrative. This show tackles many themes from greed to terrorism and ties everything together under its good vs evil agenda.

At the same time, this show doesn’t start off swinging. The pacing isn’t that great for the first few episodes and fans may be entitled to abandon the show since things take a while to pick up. However, the show eventually lifts itself off the ground midway through.

The side characters aren’t as memorable as those found in Detective Conan. Many fall within a set archetype or don’t provide enough personality to warrant a viewer’s reason to care for them. While the protagonist is flawed and fun to follow, fans may feel bummed about its other cast members. Therefore, you should give this show a shot if you wanted more supernatural-themed cases.

Detective School Q is about a mundane boy named Kyuu who wants to become a detective. Eventually, Kyuu stumbles upon the Dan Detective School, a school that trains its students to become full-fledged detectives. With help from other students, he’ll tackle many well-planned crimes that’ll help him achieve his goal.

Detective School Q is one of those underappreciated detective anime that didn’t attain a cult following like Detective Conan. Every character in this show offers something fun to the story. From full-fledged martial artists to cunning programmers, there are a bunch of characters that play off of Kyuu well. Unfortunately, anime doesn’t develop them outside of those shells.

Yet, this anime features more emphasis on teamwork than Detective Conan. Everyone works hand in hand in solving crimes, allowing them to sharpen their skills together. That said, Kyuu is just as brilliant as Conan and will amaze fans with his deduction skills. If you’re looking for another fun mystery anime that focuses on a group of detectives solving crimes, check out Detective School Q.

The File of Young Kindaichi

The File of Young Kindaichi is adored for its stellar characters, realistic cases, and well-written plot. This anime follows Hajime Kindaichi, the grandson of a famous detective. While he doesn’t look the part, Hajime isn’t a slouch regarding solving mysteries and puzzles.

With the help of his friend Miyuki and an inspector named Isamu, Hajime will tackle numerous cases that will take him to chilling and bizarre locations. On a mission to uncover the truth about his world’s disturbing and cunning mysteries, Hajime won’t let a few scary sights keep him from achieving his dream.

Many detective enthusiasts regard this show as the precursor to anime like Detective Conan. Hajime tackles numerous cases that get more gruesome and chilling as the series progresses. Unlike Conan, Hajime isn’t a perfect detective. He’ll find himself confuzzled with specific cases. The cases he tackles have more suspects, making things feel more intriguing and realistic.

If you’re looking for another detective-themed anime with a genuine edge to it, check out The File of Young Kindaichi.

Among Kyoto Animation’s repertoire, Hyouka is one of its more mysterious and suspenseful works. Like Detective Conan, this show presents multiple mysteries for its young protagonists to solve. At the same time, this show features our cast participating in various slice-of-life-themed activities.

These scenes provide fans with breathing room. Like Detective Conan, Hyouka balances its slice-of-life and mystery scenarios well. That said, Hyouka doesn’t hit the ground running most of the time, but it uses its slow pacing to build tension between each mystery.

Where the anime lacks in its pacing it makes up for its characters. Everyone from the show’s protagonist to the side characters offers something refreshing to the narrative. Fans will adore seeing our cast interact with each other inside and outside of cases. While Hyouka’s mysteries aren’t as bloody or gruesome as the cases Conan tackles, they’re creative enough to warrant fans’ investment in this anime.

So there we have it, our 10 anime/TV show alternatives to watch when you’ve caught up with Detective Conan!