Brand New Cherry Flavor is an intriguing oddball series that takes an awful lot of risks – some that pay off and others that don’t. However, the show is undeniably unique and has a lot of positives.

So without further ado, we present 10 TV shows that should whet the appetite when you’ve finished streaming Brand New Cherry Flavor on Netflix.

With four delightfully sinister tales to choose from, Channel Zero’s four-season run makes for really compelling horror viewing. However, our top pick remains seasons 1 and 3 in terms of similarities to the spooks served up in the early episodes of Them.

With a new spin on The Tooth Fairy (pictured above) and some seriously creepy dolls, this is matched by season 3’s Dream Door plot which is equally as endearing. The characters are interesting and the plot is suitably suspenseful.

The other two seasons not mentioned tackle a variety of different ideas, making for a really unusual and intriguing horror anthology.

You can read our thoughts on Channel Zero in our full season reviews here!

While it’s the mystery that keeps things moving at a steady pace, beyond that the series works much better when you view it as Alma trying to find purpose in life. Undone places a pretty big weight on the main character’s shoulders and this translates into some wonderful characterization and intriguing relationships that develop over time. 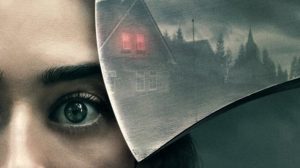 With decent pacing, some nicely worked scares and an unsettling atmosphere, Marianne takes the best elements from a number of different horrors and blends them together to deliver a frightfully good horror series.

The story here revolves around a famous horror writer who returns to her hometown only to find out that the evil spirit that plagues her dreams is actually real.

With elements of Haunting Of Hill House, Scary Stories To Tell In The Dark and Stephen King, Marianne is a deliciously dark cocktail of horror that continues to impress right through to its finale.

You can read our thoughts on Marianne in our full season review here!

Set in 1847, The Terror follows the crews of two British naval vessels, the HMS Terror and HMS Erebus on an expedition to plot a course through the Arctic North. Interestingly, the beginning portion of this story is steeped in realism; the lost Franklin Expedition did set sail with two ships and was stuck in the ice for 8 months.

With the events following this unknown beyond bone fragments and scientific theories, The Terror dives into paranoia-inducing horror. It takes influence from the book of the same name to imagine a horrific scenario of just what happened to the men aboard both ships.

It’s worth going into this one blind too, as the story delivers some brilliant twists.

The story here revolves around a woman named Alice, who finds her life turned upside down when she agrees to shoot a movie for a femme-fatale screenwriter Sophie.

As the series progresses, Alice realizes she’s stuck in a nightmare of her own making, unsure who to trust and who’s telling the truth. With some gorgeous shots and a pretty consistent tone, the beginning and end of this series are enough to recommend soldiering through the middle chapters.

Legion is a challenging sci-fi series that exists somewhere within the weird space of the X-Men universe. It’s also one of the more unusual and visually stunning shows you’re likely to see in quite some time.

The story here revolves around a super mutant named David Haller. This troubled young man spends his time institutionalized after being diagnosed as schizophrenic.

What follows is an unforgettable journey as David tries to make sense of what’s happening and why he’s there. The show has three seasons and ends conclusively too, making for a solid watch that’s very much recommended.

Bloodride is the latest Netflix anthology from Norway to creep its way onto the streaming platform. With 6 episodes clocking in at around 30 minutes each, the series offers up some clever and twisted tales in the process, even if some can feel a little familiar to what we’ve seen before.

Each episode starts in much the same way; a creepy bus driver enters his vehicle in the middle of a rainy night. At first the bus seems empty but as multiple characters appear, each chapter acts as a stop for one of our protagonists to exit as the camera focuses on each of them. Along with this, there’s also a small clue about what has happened. This acts as the “wraparound” of the anthology and ties all of these tales together.

With plenty of variety, Bloodride should please anyone looking for a decent horror anthology.

You can read our thoughts on Bloodride in our full season review here!

Armed with a gnarly, grim aesthetic, Swamp Thing is surprisingly faithful to its source material. With roots firmly hooked to the comic books of the same name, the story follows researcher Abby Arcane as she returns home after an extended leave working with the CDC.

Despite an initially frosty reception, she quickly gets pulled into a strange, horrific tale that sees local scientist Alec Holland transformed into the monstrous swamp creature.

While the ending is a little disappointing, there’s some good moments dotted throughout this one that make it well worth a watch.

You can read our thoughts on Swamp Thing in our full season review here! 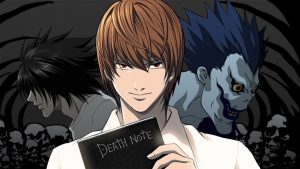 Released back in 2006, Death Note is an incredible animated supernatural thriller.

The story, with its many twists and turns, begins with Light Yagami, a cynical student at school who happens upon a mysterious book called Death Note. Claiming to kill anyone whose name is written in the book within 40 seconds, Light decides to take it upon himself to cleanse Japan of crime by killing every criminal in the country.

Accompanied by a Shinigami (A supernatural entity from a shadow realm) named Ryuk, Light decides to craft a new world for himself, free of crime. As the death count continues to grow and Light begins to lose his humanity to the book, an eccentric private detective called L stands up and opposes Light’s murderous rampage.

Death Note might be quite the epic watch, clocking it at 37 episodes, but the excellent characterization and well worked plot makes the ride well worth taking.

You can read our thoughts on Death Note in our full season review here!

So there we have it, our 10 TV show alternatives to watch when you’re finished watching Brand New Cherry Flavor on Netflix.