Black Mirror is one of the most prolific sci-fi anthologies, weaving a consistent commentary about the danger of technology. Moody, atmospheric and at times outright scary, Black Mirror is a smartly written anthology like no other.

So without further ado, we present 10 TV shows that should whet the appetite when you’ve finished streaming Black Mirror.

There are seven well-written and thought provoking tales to choose from and these cleverly branch out across a range of different genres too.

One episode explores the possibility of AI companions. The tone is slightly comedic but there’s a larger message about self-driving cars and their possible faults. Elsewhere, Prayer (our personal favourite) looks at the bleak idea of hierarchical robot nurses.

While it’s unlikely to hit the prolific heights of other anthology shows, this is easily one of 2020’s shining sci-fi jewels.

You can read our thoughts on SF8 in our full season reviews here!

The set-ups may be simple but don’t let that fool you – Inside No 9 is a fantastic anthology series and one of the must-watch sci-fi shows.

This British show is split into 6-episode long series that tackle a unique situation that usually unfolds with a shocking or bizarre twist at the end. Unlike Black Mirror, Inside No. 9’s quality has only grown from strength to strength. In fact, season 5 could well be one of the best so far.

The first episode of season 1 really sets the tone for what follows and there’s some definite horror vibes flowing through this one. A must watch for sure.

You can read our thoughts on Inside No. 9 in our full season reviews here!

The Crème de la crème of anthologies; The Twilight Zone is a classic in every sense of the word and a mainstay for any sci-fi or horror fan.

Not to be confused for the lackluster 1980’s reboot or the forgettable re-reboot in 2020, the original Twilight Zone combines horror, thought provoking ideas and sci-fi to make this a wonderful show to watch.

Even all these years later, The Twilight Zone holds its own. For that alone, this is a must-watch for sure.

A revolutionary new technology is developed takes the guesswork out of love, letting you see your soul mate in your mind’s eye.

The main story sees siblings Paul and Esther conducting an experiment using 12 candidates, testing the implant before it’s released to the general public.

As the board work to remove Paul from his position and Esther conducts her own secret agenda with her Mum, the story branches in two, with an equal focus on the test candidates and the ones in charge.

At the heart of this lies a theme park known as Westworld where robot inhabitants serve their human hosts’ every desire. What would happen then if those robots start to gain sentience?

This question consumes large parts of Westworld and while the later seasons do lose sight of what made the show so special, season 1 in particular is abut as close as you could get to perfect sci-fi.

Love, Death & Robots is as artistic as it is well written. Showing off a wide range of animated influences across its 18 episodes, this profound anthology series is one of the more surprising offerings from Netflix.

Each of the episodes explore a different style of animation with self-contained episodes. Some of these are comedic in tone, like one depicting yogurt taking over the world.

Others really hone in on what makes Black Mirror so enthralling; underlying commentary about technology and our ever-digitalized world.

If you’re in the mood for something bite-sized and sci-fi orientated, this one offers a good variety of different tales worth checking out.

You can read our thoughts on Love, Death & Robots in our full season review here! 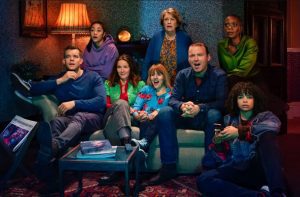 Years & Years is one of the more frightening family dramas to come out of 2019. Set in the near-future, Russel T. Davies returns to the small screen for a stand-alone mini-series that paints a concerning future for Britain.

The set-up is simple, and spans multiple years as we follow a seemingly normal British family as their life is turned upside down by cataclysmic events happening in the world.

From far-right extremists rising up and the threat of nuclear war, Years & Years does a wonderful job showcasing a chilling alt-future in our ever-digitalized world. It perfectly captures political and topical issues in a way that never feels preachy or overly condescending, delivering one heck of a rollercoaster ride along the way.

You can read our thoughts on Years & Years in our full season review here!

Tales from the Loop

Based on a series of paintings by Simon Stålenhag, this sci-fi anthology uses this sci-fi as a backdrop for more human-driven drama that runs through the different episodes, following a tight-knit community living above “The Loop” where the impossible becomes possible.

The strange organisation simply known as The Underground is run by Russ Willard and serves as a looming, mysterious shadow we never really explore that much. Instead, the show plays out with a series of stories that play out as modern day fables.

Aesthetically, Tales From The Loop looks fantastic. The backdrops are detailed, the effects are believable and there’s a gorgeous piano-driven score that runs under most of the drama. However, Tales from the Loop is also a bit of a mixed bag too. This one’s a bit more polarizing but if you’re sold after a few episodes, you should find enough to like here.

You can read our thoughts on Tales from the Loop in our full season reviews here!

With dark, minimally lit scenes and a gripping plot woven throughout its four seasons, Mr. Robot manages to enthrall from start to finish.

The story centers on Elliot, a brilliant but highly unstable cyber-security engineer. By day he seems like an ordinary, quiet young man but by night, he appears as a vigilante hacker. He quickly becomes wrapped up in a complex game of global dominance, thrust into a dark world where he’s forced to take down the corrupt company he works for.

Mr Robot is not only one of the smarter written shows on TV, it’s also one that closes out its fourth season with a near-perfect finale. As with any anthology, there’s a range of different stories showcased here, from virtual reality showcasing an entirely new life to space voyages that take a turn for the worst.

Unlike Black Mirror, the material here feels far more challenging, leaving a lot open to interpretation by the abrupt and open endings.

Considering the variety of stories shown here, each plot follows a surprisingly similar arc. A familiar setting for the main character soon turns to the unfamiliar before a climactic charge for the finale.

Almost all of these end with unanswered questions used to incite discussion about what’s just been shown.

It’s not perfect, and some of the writing is a bit of a mixed bag. However, it’ll definitely scratch that Black Mirror-sized itch.

You can read our thoughts on Electric Dreams in our full season reviews here!

So there we have it, our 10 TV show alternatives to watch when you’re finished with Black Mirror on Netflix.