30 Coins is absolutely bizarre – but it’s undeniably great TV. The horror and suspense work beautifully together to deliver a mystery box you’ll want to watch through to the end in a bid to find out what happens next.

So without further ado, we present 10 TV shows that should whet the appetite when you’ve finished streaming 30 Coins.

The TV adaptation of The Exorcist has absolutely no right to be as good as it is. It’s also one cancellation that remains a bitter pill to swallow to this day for many fans. The series adaptation of the critically acclaimed film follows pretty much the same story but dives a lot deeper into the various characters and lore.

At its core, The Exorcist revolves around three priests (Father Tomas Ortega, Father Marcus Keane and Father Bennett) dealing with a particularly nasty case of demonic possession targeting a family and a foster home.

There’s some really creepy scenes here too, including one infamous Jenga game during season 1. With two seasons to get through, The Exorcist delivers enough bang for your buck to make it worth watching.

Apple TV+’s very own mystery box is an M Night Shyamalan chill-fest. Servant is a show designed to be binged so Apple’s decision to drip-feed this out once a week was a real disappointment.

However, given the second season is on the horizon and the first is already up on the platform in its entirety, Servant is a great show to binge through. It’s chilling, confusing and utterly bizarre – not unlike 30 Coins.

The story revolves around a Philadelphian couple who mourn the death of their child, causing a huge rift in their marriage. That rift is only made more bizarre by Dorothy’s need to channel her grief into a doll which she pretends is real. Of course, this creepy set-up paves way for a malevolent spirit to entire the house, seemingly in the form of a young girl called Leanne.

This is classic M. Night Shyamalan territory, with a great blend of horror and mystery to keep you hooked until the end.

You can read our thoughts on Servant in our full season review here!

Back in 2004, a tiny show called Lost went way over-budget with its pilot episode. The consequences of that saw several people fired. Little did they know at the time that this mishap would help grow Lost into a worldwide phenomenon that completely changed the way people watched TV.

This highly engrossing mystery series revolves around a group of plane-crash survivors washing up on shore and fighting for survival on a very weird island holding many, many secrets.

With similar religious themes to The Stand and a large ensemble of morally grey characters, Lost is at its strongest when it begins unraveling all the different mystery box elements. While the show does write itself into a corner at times, the end result is a 7 season journey full of epic moments and unforgettable action. If you haven’t seen it already, Lost is a must-watch show.

True to the original comic books, Constantine does a great job capturing the essence of what made that visual novel of the same name so appealing.

At the heart of this lies a man named John Constantine struggling with his faith and haunted by the sins of his past. While wrestling with his own demons, Constantine is suddenly thrust into the role of defending humanity from the gathering forces of darkness.

Although it only ran for 1 season before being cancelled, the character work here is strong and there’s an undeniable energy that makes the 13 episode run a joy to watch.

The story revolves around a man and a woman making separate journeys to a mysterious island off the British coast. To give much more away would be a disservice to this show but it certainly grows and evolves over time into something really special. The ending may be a little subjective for some but the ride to get there is suitably eerie.

You can read our thoughts on The Third Day in our episode reviews here! 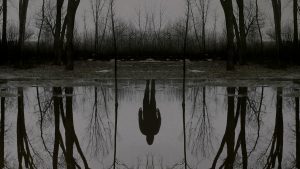 The OA’s cancellation caused quite the stir online. That alone should tell you all you need to know about the power and quality surrounding this utterly bizarre Netflix Original.

From here, the show only grows and evolves over time, delivering two seasons of compelling TV. Unfortunately that final episode ends on a cliffhanger which could make or break the experience for you.

When it released back in 2016, Damien was panned pretty hard by critics and the show was cancelled after one season. Part of that scrutiny comes from the fact this series is based on the 1976 film, The Omen.

Here though, Damien follows the adult life of Damien Thorn who’s now a 30-year-old war photographer who’s forgotten his Satanic past. When Ann Rutledge, a woman who has protected him his whole life, rocks up on the scene, she helps him embrace his Antichrist side.

It’s a fun little romp this one and although a little silly at times, has a distinct charm and charisma that’s hard to deny.

So there we have it, our 10 TV show alternatives to 30 Coins!