There aren’t likely to be main films released this year that feel as horrific and terrifying as The Social Dilemma. This documentary will almost certainly leave you questioning the true nature of these tech giants. If you’re looking for equally shocking or tech-centric documentaries, where do you start?

Well, fret not! We’ve combed through the archives and saved you the hassle of having to try and find something similar with our top 10 picks.

So without further ado, we present 10 movies to check out when you’ve finished watching Social Dilemma.

The Social Network is a very simple but effective bio-pic. Following the early days of Facebooks inception, this movie follows the life of Mark Zuckerberg as he rises from obscurity to create the most dominant social media network on the planet today.

It’s not all sunshine and rainbows though, as Mark finds himself sued by the Winklevoss twins, who claim he stole their idea. That’s not to mention the co-founder who was later squeezed out of the business.

It’s a surprisingly tense and gripping thriller well worth checking out.

You may be wondering why Black Fish is on this list. After all, what does a documentary about the atrocities that took place in SeaWorld have in common with Google and Facebook?

Where Black Fish excels is unveiling the truth about a company that otherwise seems innocent on the surface. When the truth is unveiled it brings with it a cold chill up your spine as you’re forced to watch in horror what takes place.

This 2013 documentary is labeled as a psychological thriller and for large stretches of the documentary, that’s exactly how this one plays out. If you haven’t already watched it, Black Fish should definitely be on your radar.

Coral reefs around the world are vanishing at an unprecedented rate. In a bid to capture this, Chasing Coral is a 2017 documentary film about the damaging effect humanity is having on our oceans.

It’s a wake-up call about the problems our aquatic neighbours are facing and the danger caused by the coral reefs bleaching.

Interestingly, this documentary also dives into a lot of educational material including how coral is formed along with the root cause of oceans starting to warm. It really is an essential watch and a compelling documentary in its own right.

One of the more controversial picks on the list, Life 2.0 is a feature-length documentary following a group of people (see: damaged people with psychological issues) whose lives are dramatically transformed by playing in a virtual world.

It’s an examination of how games can reshape relationships, identities, and ultimately the very notion of reality. It’s a fascinating watch and despite being a little contrived in its presentation, definitely one to check out.

The end result is something that’s really quite shocking and surprising. Combining both science and art, Chasing Ice balances its hauntingly beautiful imagery with some solid science and a lot of facts along the way.

Narrated by David Attenborough, this BBC documentary special is the latest from our National treasure and a real hammer blow to the gut. Clocking in at a little under an hour, Extinction is all about the damaging effects humanity is having on this planet.

It’s a gut wrenching, difficult documentary to watch and certainly one of the more shocking to come out this year. Much like The Social Dilemma, this one is likely to leave you thinking deeply when you’re done. 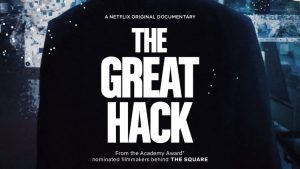 Several years ago, the online world was whipped up in a storm of controversy surrounding The Cambridge Analytica leak. The Great Hack is a documentary that examines this event through the lens of several affected people at the time.

It’s a documentary that dabbles in the concept and idea of big data and algorithms. However, it never quite follows through with this in quite the same detail The Social Dilemma does. There’s enough here to like though and an interesting extension of the issues tackled in Netflix’s latest documentary.

You can read our thoughts on The Great Hack in our review here!

Fueled by far-reaching conspiracy theories and a distrust of government and science in general, Behind The Curve looks at the growing phenomena of people believing the world is flat.

Through face to face interviews, dome models, questionable science and archival footage, this documentary looks in more detail at the men and women behind this movement.

You can read our thoughts on Behind The Curve in our review here!

Much like The Social Dilemma, Terms and Conditions is a documentary that exposes what corporations and governments learn about people through Internet and cell phone usage.

Lengthy terms and conditions pages are used to lull us into a false sense of security while selling our details on to the highest bidder. It’s a hard hitting, well written documentary worth a watch.

Algorithms and AI-driven technology is absolutely everywhere. While The Social Dilemma tackles the insidious aspects of this, Secret Rules opens up that discussion to a much wider perspective through this hour-long documentary.

Algorithms are all around us and this documentary proves it. Insightful, educational and very interesting, if algorithms are your jam then this will be right up your alley.

So there we have it, our 10 Movie & documentary picks to keep you busy after watching Social Dilemma on Netflix.