Reminiscing With Some Old Movies

Reminiscence is the latest sci-fi bender from the mind of Lisa Joy. It’s certainly a slow burn but it’s visually stunning and features a really fascinating world.

If you’ve finished streaming this one and are looking for alternative movies – fret not. We’ve combed through the archives and saved you the hassle with our top 10 picks.

So without further ado, we present 10 movies to check out when you’ve finished watching Reminiscence!

Out of all the Nolan films released, Inception is the one that plays on the ideas of dreams and time being intermittently linked.

The basic story revolves around a man named Cobb, who launches a dream-heist to plant an idea inside a CEO’s mind. It sounds complicated but Inception does well to lay out its ideas as simply as possible, especially with a first half littered with exposition.

Inception’s set pieces are awe inspiring and jaw dropping, making for quite the spectacle in this time-bending picture.

Dark City is a gritty, moody film that presents a very dark (no pun intended) world. Our protagonist is John Murdoch who awakens amnesia-stricken and alone in a strange hotel. Struggling to recall what’s happened to him, John is wanted by authorities for a series of brutal and bizarre murders.

As John starts to piece together his past, he finds a murky underworld controlled by a group called The Strangers. These guys have the ability to put people to sleep and alter the city and its inhabitants. This causes Murdoch to set out and try to stop them before they take control of his mind.

This unconventional sci-fi movie is incredibly unique and will undoubtedly keep you guessing right to the very end.

Steven Spielberg’s intriguing, thought provoking sci-fi piece takes place in the not-so-distant future where the polar ice caps have melted and ocean waters have consumed many of the coastal cities in the world.

With humanity gathered together, a mecha-producing company rises up and builds David, an artificial child that exhibits real feelings. Those feelings come in the form of never-ending love for his “Mother”, Monica. She adopts this child as a substitute for her real son, who’s in a comatose state. When he awakens however, Monica is left with two sons and one big dilemma.

With interesting ideas around humanity, love and our purpose in life, A.I. Artificial Intelligence is a smartly written movie and well worth checking out.

Eternal Sunshine Of The Spotless Mind

Ever had a break-up so bad you wish you could erase all the memories of your time together? Well, think no more. Arguably Jim Carrey’s best film, Eternal Sunshine is a non-linear, surreal trip into the dream world.

The setting here takes place in the near-future where a medical procedure allows one to erase all memories of another person. What begins as a decision made out of anger, soon turns to bitter regret as Joel Barish realizes that not all his relationship was based on misery.

As he struggles to hold onto the memories of the past, this heartbreaking dramedy plays out key scenes from Joel and Clementine’s relationship as Joel desperately clings to what he once had.

This cautionary tale is a wonderful example of how bad experiences shape who we are and erasing those will only destroy the very essence of what makes us…us. That much is especially true here in this movie, perfectly exemplifying how even the worst relationships can have some redeeming features. 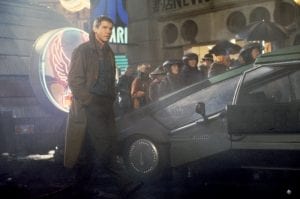 Blade Runner is a quintessential sci-fi thriller and one that still holds up to this day. Straight from the mind of Ridley Scott, this gorgeous picture presents a dystopian 2019 vision of Los Angeles, complete with towering skyscrapers and synthetic humanoids.

At the center of this is grizzled former Blade Runner, Rick Deckard. He’s called out of retirement when four rogue replicants steal a spaceship and illegally enter Earth to find their creator, Dr Eldon Tyrell.

This essentially sees Deckard tasked with tracking down and “retiring” these dangerous androids.

Blade Runner is an amazing film, one that dives into deep, philosophical questions while boasting a solid story to back it up.

Gone Girl is the perfect subversion of expectation film. Before that term was used to parody Game Of Thrones, Gone Girl perfectly flipped the script at the midway point to deliver a damning assessment of obsession, betrayal and addiction.

The story here revolves around a missing woman called Amy Dunne and her husband Nick who’s desperate to try and find her. With question marks surrounding her disappearance and Nick’s behaviour raising some eyebrows from the authorities, what begins as a hunt for the truth soon turns into a manhunt against Nick, as his true motives are revealed.

To give much more away would be a disservice to the movie but suffice to say, Gone Girl turns things upside down with a shocking twist. From here, the film completely derails everything we thought we knew, turning this into a psychological thriller of the best kind.

The Matrix is quite simply a groundbreaking movie for its time. From bullet time camera work to the shocking reality our main characters find themselves in, The Matrix is sci-fi at its absolute best.

For those unaware, the movie revolves around a hacker called Neo. When a beautiful stranger called Trinity invites him to a club by following a white rabbit, he stumbles upon a shocking truth about our reality.

Well written, intriguing and incredibly though provoking, The Matrix was a landmark picture for its time and remains one of the quintessential sci-fi movies of our time.

If you’re looking for something with a similar style akin to slow-burn detective noirs, look no further than Stranger Days.

The story here revolves around a former cop turned street-hustler, who accidentally uncovers a conspiracy in Los Angeles. This slow-burn film has some wonderful ideas that are brought to life in the best possible way through this cyberpunk world.

It’s best to go into Strange Days blind, as this underrated movie is an absolutely must-watch for those after a compelling slice of sci-fi noir.

The Greatest Showman is a musical starring Hugh Jackman and Rebecca Ferguson. So why is it on this list? Well, if you’re looking for more Ferguson/Jackman relations, look no further than this one.

The musical follows the origin story of P.T. Barnum, although it does take quite a few liberties with the real story. Regardless, this colourful, vibrant story celebrates the nature of show business and following your dreams, depicting the rise to fame off the back of hard work.

The songs are catchy, the cast are memorable and the pacey plot never misses a beat.

EXistenZ is oftentimes overshadowed by The Matrix, which to be fair managed to grab a far bigger audience with its story. While there’s nothing wrong with that, eXistenZ arguably trumps that movie with its grandiose ideas about philosophy within its reality-bending plot.

The story here revolves around Allegra Geller, the leading game designer in the world. While testing her new virtual reality game eXistenZ, she’s attacked by an assassin. Fleeing with her marketing trainee Ted Pikul, he’s thrust into the role of her bodyguard.

Without giving too much away, the story then dives into big ideas surrounding existentialism, along with themes regarding the future of VR and our world as a whole. This one’s a real hidden gem!

So there we have it, our 10 movie picks to keep you busy after watching Reminiscence on HBO Max!