The Mitchells VS The Streamers

The Mitchells vs the Machines is a wonderful animated treat, combining elements of sci-fi, comedy, fantasy and drama. The ensuing result is one of 2021’s brightest jewels – and the perfect treat for adults and children alike.

So without further ado, we present 10 movies to check out when you’ve finished watching The Mitchells vs the Machines.

If you’re looking for a quirky, sci-fi inspired animation, Dreamworks’ Monsters VS Aliens is certainly worth checking out.

The movie is as absurd as it is hilarious, with lots of well-timed jokes and action dotted throughout.

Boasting an all-star cast, Monsters VS Aliens follows a woman named Susan who transforms into a giant after being struck by a meteorite on her wedding day.

Recruited to fight alongside various other monsters, Ginormica soon finds herself at the forefront of an impending alien invasion. It’s up to this giant and her merry band of misfits to set out and try to save the day. 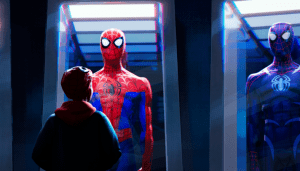 Spiderman: Into The Spider-Verse

Visually stunning and impressively crafted, this is not just one of the best animated adventures out there, it’s also the best Spider-Man film produced to date.

After splitting apart the fabric of time and space, multiple Spider Men from other dimensions come together to stop Kingpin and his band of villains before they destroy the universe.

While this all sounds very familiar, the main crux of the story sees Miles become the hero he was always destined to be while learning the greatest lesson of all. With great power…well, you know the rest.

The animation is beautifully crafted and the film oozes charm and visual splendor with every scene. This one is another must-watch.

If you’re looking for something less animated but more sci-fi orientated, Will Smith’s I, Robot definitely has more than a few similarities to The Mitchells VS The Machines. Most notably, its story beats and attitude toward technology.

Our plot here whisks us away to 2035 where robot and man live among each other peacefully. Technophobic cop Del Spooner is in no mood to accept robot-kind so freely though. When he begins investigating a crime that may have been perpetrated by a robot, Spooner starts to uncover a much larger threat to humanity’s survival.

With some great themes centering around technology, trust and loyalty, I, Robot is a solid movie and backed up by a few neat little twists along the way.

Another Dreamworks animation, The Croods takes your typical family set-up and injects a great dose of humor alongside strong themes of courage and acceptance.

Instead of a modern day timeline however, The Croods jettisons back to prehistoric times. There, we follow a caveman family forced to trek through an unfamiliar world together, led by an inventive, forward-thinking boy.

While the journey itself is pretty formulaic, the reason this film works as well as it does comes from the characters and their dynamic. The family all have their own quirks, with patriarchal Grugg learning some valuable lessons across the 90 minute run-time. This is a joyous animated flick and a really solid watch.

Speaking of lovable family dynamics, The Incredibles is one of the more unique Pixar offerings – and arguably one of its best too. With the studio turning their hand to the superhero genre, The Incredibles takes all the hallmarks of a good character-driven story and weaves it around some gorgeous visuals and impressive action.

The story itself centers on the Parr’s, a quiet suburban family who hang up their superhero capes and try to stay off the radar. However, when a new supervillain arrives on the scene, Mr Incredible and his family are called back into action again.

There’s of course a lot more going on than that simplistic synopsis of course, including lots of interesting themes around family, trust and loyalty. There’s some great jokes in here as well and the entire film plays out as a beautiful love letter to the superhero genre.

The Iron Giant is a real animated classic. It’s a film that takes inspiration from The Iron Man book and transforms that into a timeless story about boundless friendships.

At the center of this emotionally stirring story is a 9 year old boy called Hogarth Hughes. One day, he makes friends with an innocent giant metal robot that crashes down from outer space.

While he does, a paranoid US government agent called Kent Mansley arrives and remains determined to destroy this giant at all costs.

Be prepared though, this one comes armed with a really emotional ending. Regardless though, The Iron Giant is an excellent film that adults and children alike should enjoy.

The Lego Movie is a brilliantly satirical movie, armed with one very catchy song and plentiful laughs dotted along the way.

Taking place almost entirely in the LEGO world, The Lego Movie follows an ordinary LEGO construction worker called Emmett. No one really pays him much attention until one day where he’s thought to be the prophesied “special”.

Once this news leaks out however, Emmett is recruited to join a super secret team on a mission to stop the evil tyrant President Business from gluing the LEGO universe together.

Cloudy with a Chance of Meatballs

Cloudy With A Chance Of Meatballs is another quirky Dreamworks animation, one that brings a wacky concept to life in the best possible way. The movie is packed full of imaginative ideas too, with a great use of technology.

At the center of this is Flint Lockwood, a young man who believes he’s a genius. After creating a slew of failed inventions, the death of Flint’s Mother only further fractures the estranged bond between Flint and his Father.

More determined than ever, Flint sets out to change the world through the creation of a machine that can turn water into food. Unfortunately things go awry, and the world starts raining down food.

Chaos inevitably breaks out, leading to quite the chaotic, action-packed flick to follow.

Steven Spielberg’s intriguing, thought provoking sci-fi piece takes place in the no-so-distant future where the polar ice caps have melted and ocean waters have consumed many of the coastal cities in the world.

With humanity gathered together, a mecha-producing company rises up and builds David, an artificial child that exhibits real feelings. Those feelings come in the form of never-ending love for his “Mother”, Monica. She adopts this child as a substitute for her real son, who’s in a comatose state. When he awakens however, Monica is left with two sons and one big dilemma.

With interesting ideas around humanity, love and our purpose in life, A.I. Artificial Intelligence is a smartly written movie and well worth checking out if you’re after a more cerebrally charged slice of science fiction.

One of Pixar’s greatest animated flicks, Wall-E is a well written dystopian tale with a lot of warnings around humanity’s future.

With the world uninhabitable, the opening shots of an eerily silent Earth, folding back to show our little clean-up robot dwarfed by skyscrapers of rubbish, is a pretty harrowing way to start this movie.

From here, the adventures of little Wall-E see him wrapped up in a wide-spanning journey that takes him into space where we see humanity’s fate and what has befallen mankind. With strong themes surrounding the future, class, global warming and AI, Wall-E is a solid option in the sci-fi field.

So there we have it, our 10 Movie picks to keep you busy after watching The Mitchells vs the Machines on Netflix.