Looping Around To More Movies

Looper takes a time-loop concept and absolutely runs with it, spinning that concept into a cleverly written plot about an assassination conducted by our protagonist’s older self no less.

So without further ado, we present 10 movies to check out when you’ve finished watching Looper.

Timecrimes is a real sleeper hit and a compelling time loop movie that’s worth checking out if you’re looking for a decent Indie flick.

The plot line centers on a man who accidentally gets into a time machine and travels back in time nearly an hour. From here, the movie explores all the usual shenanigans one would expect with a plot line like this.

Timecrimes explores time travel in a pretty interesting way but unlike Primer, does so in a more simplistic way. It won’t be for everyone, and a lack of character growth does hold this one back. However, as an Indie, Timecrimes definitely has some great moments.

This movie is dripping in tension and really puts the thrill in the word thriller. 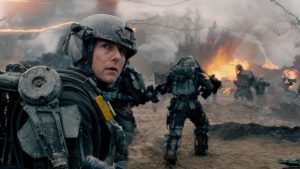 Edge Of Tomorrow is another time-loop movie, this time taking the idea of a big, expansive battlefield and forcing a soldier into reliving this epic battle over and over again.

At the center of all this is Major William Cage, who finds himself dropped into what appears to be a suicide mission. Aliens have declared war on Earth and hit the planet with an unrelenting assault.

Killed within minutes, Cage slowly starts to memorize the attack patterns and eventually teams up with fellow survivors, determined to try and stop this endless cycle before it’s too late.

Edge Of Tomorrow thrives on its big action set pieces, and this movie is a real sci-fi spectacle.

If you’re looking for something with a similar sci-fi vibe, Minority Report is well worth a watch. Set in the year 2054, Minority Report revolves around a special police unit called “Precrime” who jump back through time to arrest criminals before they break the law.

The result of this is a utopian world where crime is non-existent. All seems well until Anderson (our protagonist) is predicted to commit a murder in the next 36 hours.

With Anderson unaware of who his victim is, he sets out to try and uncover what’s happening and prove himself innocent. Expect plenty of action set pieces, crazy twists and a brilliant third act that ties everything together.

Alongside the excellent quality of its small screen cousin, the original big screen movie of Twelve Monkeys is just as endearing.

This sci-fi movie plays on the idea of rewriting history and revolves around a man sent back through time to stop a viral outbreak from dooming humanity.

It’s a simple idea in truth and one that works well to produce a decent 90’s thriller you’re unlikely to forget in a hurry. Bruce Willis puts on a great performance too and the movie lends itself to some decent twists and turns along the way.

Triangle is a clever film. It’s a movie that takes a simple mystery and folds it into an origami-shaped brain-twisting puzzle. The story works on several levels, and definitely benefits from repeat watches too.

The story revolves around Jess, a young girl who heads off on a yacht with a group of friends. The whole time though she feels like something is wrong, crescendoing into a storm that forces them to seek shelter and refuge on a passing ocean liner. Only, Jess begins to feel a sense of Deja vu, like she’s been on this ship before.

With someone seemingly hunting them down, it’s up to Jess and the others to figure out what’s happening before it’s too late.

Cleverly written, full of some great reveals and incredibly tense, Triangle is certainly a time loop movie you should check out.

Blade Runner is a quintessential sci-fi thriller and one that still holds up to this day. Straight from the mind of Ridley Scott, this gorgeous picture presents a dystopian 2019 vision of Los Angeles, complete with towering skyscrapers and synthetic humanoids.

At the center of this is grizzled former Blade Runner, Rick Deckard. He’s called out of retirement when four rogue replicants steal a spaceship and illegally enter Earth to find their creator, Dr Eldon Tyrell.

This essentially sees Deckard tasked with tracking down and “retiring” these dangerous androids.

Blade Runner is an amazing film, one that dives into deep, philosophical questions while boasting a solid story to back it up. 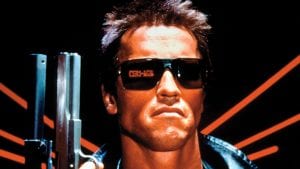 1984’s The Terminator is an absolute sci-fi classic. It’s also one of the few rare movies where the sequel is as good – if not better – than the original.

The Terminator depicts a dystopian 2029 future where machines have conquered the entire world. Within this post-apocalyptic vision, an indestructible cyborg-assassin known simply as Terminator is dispatched to kill humankind’s most important woman – Sarah Connor.

As he jumps back through time, so too does Kyle Reese, a brave soldier from the human Resistance Army who tries to stop this cybernetic killer. But how do you stop an unstoppable machine?

Well written, brilliantly paced and featuring some memorable moments, The Terminator is a must-watch.

So there we have it, our 10 Movie picks to keep you busy after watching Looper.