Revenge Is Never A Straight Line

Kill Bill is one of Tarantino’s best works (and he has a lot of great ones, let’s be fair!) This simple but effective movie blends a Western vibe with a simple revenge plot.

If you’ve finished watching this flick and are looking for alternatives – fret not! We’ve combed through the archives and saved you the hassle with our top picks for alternate viewing.

So without further ado, we present 10 movies to check out when you’ve finished watching both volumes of Kill Bill.

The Bride Wore Black is another classic tale of revenge and actually has a lot of similarities to movies like Kill Bill.

When it comes to epic tales of revenge, there aren’t many as good as Gladiator. This timeless tale depicts a General who becomes a slave. This slave them rises up as a formidable gladiator against the corrupt emperor of Rome.

That infamous General happens to be one Maximus, who finds himself battling it out against the corrupt and cruel Emperor Commodus. Across the movie both characters run on parallel lines of fate, only to intersect in dramatic fashion during the film’s third act.

Armed with some great acting and exciting set pieces, Gladiator is a wonderful movie.

The story takes place in 1844. The peace of Feudal Japan is shattered by the cruel Lord Naritsugu Matsudaira, with a political rising drawing ever-nearer. One thing leads to another and 13 samurai band together and head off on a suicide mission. Their target is Naritsugu and his army of 200 samurai, leading to an epic showdown.

This 2010 picture is wonderfully worked and delivers an enthralling and epic action flick.

This gory, psychedelic picture won’t be for everyone but it is one of the unusual movies on this list.

Our tale revolves around a revenge feud between two rival clans. At the center of this conflict lies a mysterious blind woman. Dead-set on vengeance, she heads off on the hunt for the head of the Yakuza gang.

This one doesn’t always make sense but the movie is good fun nonetheless.

Five Deadly Venoms is a kung-fu movie with a surprisingly good story behind its fights. It’s also a picture that worked as a template for Tarantino’s Deadly Viper Assassins from Kill Bill!

Our tale centers on a dying teacher who instructs his final student to check up on his five former pupils. Each of these students have been taught a unique and special style of kung-fu: Centipede, Snake, Scorpion, Lizard and Toad. Greed and treachery ensue as the student discovers that evil does lurk within these ranks – but who can he trust to squeeze out the poison?

Seven Samurai is not only Director Akira Kurosawa’s most well-know movie, it’s also the most widely recognized Japanese film ever made.

The story is simple, and revolves around a poor village attacked repeatedly by bandits. One day, the villagers decide to hit back and turn to a veteran samurai for help. He, in turn, gathers six other samurai who teach the villagers how to defend themselves. In return, they feed the samurai three meals a day. All of this builds up to a giant battle at the end.

Clocking in at a little under 3.5 hours, Seven Samurai is nothing short of epic. If you haven’t seen it, this one is well worth checking out. 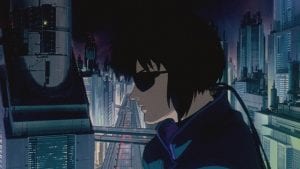 Ghost in the Shell

Not to be mistaken for the questionable live action remake, the original Ghost in the Shell is an excellent revenge-fueled anime.

Our tale takes place in the year 2039. Technology has advanced so far that cyborgs are commonplace. Human brains can connect to the internet directly. And the world is a bleak, digitized dystopia.

At the center of this is Major Motoko Kusanagi who happens to be an officer in Section 9; an elite, secretive police division. She’s currently on the trail of the Puppet Master, a cyber criminal who hacks cyborgs in order to obtain information and commit other crimes.

This movie is beautifully shot and armed with a really impressive story. Ghost in the Shell is certainly one of the best anime movies from the 90’s.

Although Atomic Blonde does suffer from an unnecessarily complicated story, it more than makes up for its shortfalls with some breathtaking action scenes and some slick camera work.

The story follows Lorraine, an undercover MI6 agent working in Berlin during the Cold War, at the height of tensions before the Berlin Wall comes crashing down. Lorraine has been sent to investigate the murder of a fellow agent. In doing so, she also works to recover a list of double agents.

One impressive hallway fight props this film up from mediocrity, while the visual style lends itself nicely to the time period. This is certainly one stylish espionage thriller!

Lady Vengeance is a lovely Korean thriller, armed with beautiful cinematography and a compelling story.

Our lead character here is Lee Geum-Ja, who’s wrongfully accused of child abduction and murder. After being released from prison after 13 years, Geum-Ja is hell-bent on taking revenge.

Her target is the man who put her behind bars, prompting Lee to hatch a plan with the other inmates. Only, that’s easier said than done – especially when she’s reunited with her daughter.

With a split focus between revenge and atonement, Lady Vengeance is a though provoking picture well worth checking out.